Brumos Racing's Bob Snodgrass died Tuesday in Jacksonville, Fla. The cause of death unknown as this is written. No matter, Robert F. Snodgrass Jr., CEO of Brumos Porsche and Brumos Motorcars, is gone at 64. Legends induction ceremony: ...

Brumos Racing's Bob Snodgrass died Tuesday in Jacksonville, Fla. The cause of death unknown as this is written.

No matter, Robert F. Snodgrass Jr., CEO of Brumos Porsche and Brumos Motorcars, is gone at 64. 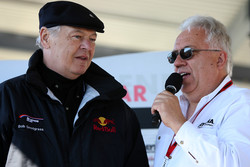 Just a couple of weeks ago I was shaking hands with a guy who by all appearances had emerged much for the better from a multiyear medical hell on Earth, gamely fighting one life-threatening malady after another. Finally, Bob had gotten some color in his cheeks, weight started slipping back onto his bones and, as importantly, he again heartily talked and walked the walk of sportscar racing.

Maybe his body was just too tired to go on.

"Bob was one of my guiding lights in sportscar racing," Grand-Am president Roger Edmondson said Wednesday morning as he discussed Bob's passing.

"He opened his arms to me when I came into sportscar racing. While we didn't always see eye to eye, I knew I was getting his thoughts uncensored, unfiltered. He is unquestionably one of the straightest-talking guys I've ever known. There was no need to look for hidden agendas with Bob and I always appreciated that."

Bob was born just down the road from Watkins Glen International in Elmira, New York. Educated at the Elmira Free Academy, Bob and Mike Colucci, who heads Brumos Racing's No. 58 Red Bull Porsche Riley Daytona Prototype program, were boyhood buddies. Mike and Bob absolutely relished telling stories of their boyhood days, many times when independent of each others' proximity.

Most of those stories were about racing. One was how Bob fell in love with it, of how Bob as a young boy got the chance to see Watkins Glen like it really was and what it's become since. Watkins Glen and all it represented in racing was with him, deeply embedded in him, for all his life.

Bob brought that with him to Grand American, to everything "racing."

"He was a just a great guy," Jim France said as he searched for the words to somehow put Bob's life and loss into perspective.

"He was one of the key men in American sportscar racing. His loss is a big one to me. He was a very good friend," said France, still searching for all the words he just couldn't say at the time.

Early in my motorsports journalism career Bob thrust his hand toward me as we met for the first time. "How in heck am I gonna get my hand around this bear paw? This is gonna hurt!" I remember thinking as his hand met mine.

It didn't, though it certainly could've.

Though Bob had an attention-getting, raspy baritone voice and a rather direct demeanor about him, he was a gentle giant of a man deep down inside where it really counted.

Everything he touched was a passion. Whether racing cars, helping save retired racing greyhounds from certain death or helping a few strays of the human kind find balance in life, Bob's heart went deep and big.

But like a girl who stole his heart, cars were his passion. Whether in a tuxedo at a high-brow dinner in Zuffenhausen, Germany, or eating MacDonald's hamburgers in Florida City, Bob loved talking about cars.

Bob would hop from an Aston Martin Vanquish and into a lowered Dodge Magnum Wagon without thinking twice.

Oh, that man did love to find the perfect apex when at the wheel of one of his many historic racing cars. How he loved to see others hit it, too, even if it meant pushing them farther than they thought they could go.

Bob's success is found in what he meant to others. His value will be measured by the many times people fondly think and speak of him for decades to come.

DTC: Jyllandsringen round one preview