Today Flavio Briatore, former Renault Formula One team principal, has asked the French High Court in Paris to overturn the decision of FIA's World Motor Sports Council to ban him from Formula One for life. The decision was made in September this ...

Today Flavio Briatore, former Renault Formula One team principal, has asked the French High Court in Paris to overturn the decision of FIA's World Motor Sports Council to ban him from Formula One for life. The decision was made in September this year after the Renault crash-gate scandal involving the deliberate crash of Nelson Piquet Jr. during the 2008 Singapore Grand Prix. Briatore also asked for 1,000,000 Euro compensation and said: "I have every confidence that the French courts will resolve the matter justly and impartially." 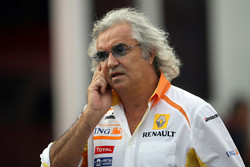 Briatore's lawyer Frenchman Philippe Ouakrat just before the hearing: "My client only aims to be able to do what he wants and to recover his freedom. He is calm and determined." Ouakrat said the punishment was 'scandalous' and also claimed the WMSC is not allowed to impose 'indefinite sanctions' on individuals.

Former Renault chief engineer Pat Symonds also asked the French High Court to overturn the WMSC decision to ban him from the sport for 5 years. Symonds lawyer Dominique Dumas: "My client's responsibility shouldn't be taken for granted, his only regret is that he didn't take all the necessary measures when Piquet told him he was going to crash his car into a wall."

Previously, Briatore had called the WMSC decision a 'legal absurdity' and claimed the decision to ban him for life had already been made one day before the hearing of the WMSC in September. He said the hearing was a deliberate breach of the rules of natural justice, and also argued the WMSC had not given him the opportunity to defend himself, and that he was denied a 'free and fair' defense.

He also suggested that former FIA president Max Mosley had abused his power to permanently 'remove' him from Formula One, as a result of the tensions between the FIA and FOTA earlier this year -- at the time Briatore had threatened the FIA to launch a rival series -- and that would have been the real reason for the absurd punishment. The Italian also claims the WMSC decision was based upon the testimony given by one man, the now famous 'witness X', who's identity was (of course) not revealed.

FIA lawyer Jean-Francois Prat launched a counter attack at the hearing today, saying that it was the FIA's responsibility to "guarantee the security of their events." Prat also added: "Honestly, we hadn't seen something as unethical in a sports competition before. To me, it was almost a crime. Many people's lives were endangered. Briatore deserved his ban as he had 'undermined' the sport's ethic and the credibility of the competition and had put other people's security at risk." 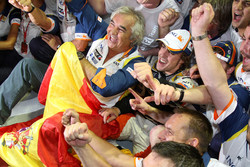 Flavio Briatore and Fernando Alonso celebrate their win during the Singapore GP 2008.
Photo by xpb.cc.

In addition, we should also keep in mind that the Renault F1 team had pleaded 'guilty' long before the hearing of the WMSC, and therefore there wasn't really much to discuss about during that hearing. The only thing they had to do was to determine the punishment, and as it turned out, that was discussed by the members of the WMSC the day before, just like Briatore said.

There is still one question Briatore or the FIA haven't answered until now; was the deliberate crash an idea of Piquet, like Briatore and Symonds claim, or was it Briatore's or Symonds' idea like Piquet claims? Because that is what I would like to know before saying something about who is right and who is wrong. But one thing is very clear to me, no matter whose idea it was, fixing a race is plain stupid. Neither driver, nor engineer, nor team principal should have gone along with such a scam, never.

The French High Court has an appointment with Briatore and Symonds and/or their lawyers, on January 5, 2010, when they will give their verdict on one of the most controversial scandals in the history of Formula One.