Formula One - Full Throttle: A chat with Patrese

Even today, some sixteen years since he retired from Formula 1, Riccardo Patrese is a man at ease. The Italian was the most experienced F1 driver in the history of the sport; having competed in 256 races during a 16 year career, until Rubens Barrichello surpassed that landmark at the 2010 Belgian Grand Prix. Though he was never spoken of in the same breath as his rivals of the day, Ayrton Senna, Alain Prost, Nelson Piquet or Niki Lauda, neither was he a journeyman. On occasion, he could deliver performances from the top drawer but above all, like Derrick Warwick, he is remembered as being simply, one of the nicest men to have graced the grand prix paddock.

His most successful seasons, in terms of results anyway, were those in 1991 and 1992 when the Williams Renault package ultimately proved to be the class of the field. Having encountered a difficult season in 1990, when such results for the following year initially seemed highly unlikely, Nigel Mansell arrived, fresh out of a self-inflicted ...

Even today, some sixteen years since he retired from Formula 1, Riccardo Patrese is a man at ease. The Italian was the most experienced F1 driver in the history of the sport; having competed in 256 races during a 16 year career, until Rubens Barrichello surpassed that landmark at the 2010 Belgian Grand Prix. Though he was never spoken of in the same breath as his rivals of the day, Ayrton Senna, Alain Prost, Nelson Piquet or Niki Lauda, neither was he a journeyman. On occasion, he could deliver performances from the top drawer but above all, like Derrick Warwick, he is remembered as being simply, one of the nicest men to have graced the grand prix paddock. 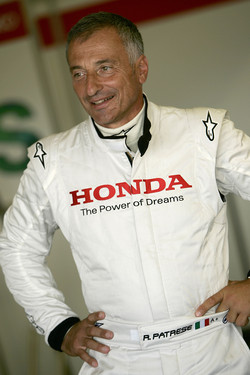 His most successful seasons, in terms of results anyway, were those in 1991 and 1992 when the Williams Renault package ultimately proved to be the class of the field. Having encountered a difficult season in 1990, when such results for the following year initially seemed highly unlikely, Nigel Mansell arrived, fresh out of a self-inflicted retirement and proceeded to stamp his mark on the team at the first winter test session.

"In '89 and '90 I was usually faster than my team mate Thierry Boutsen," Patrese declares. "But when Nigel came on board for '91, he jumped in the car we had struggled with all year for the first time and you could tell he knew what he was doing. He suggested the team make many changes and the car suddenly went two seconds per lap faster than it had done before!"

Of course, while Williams insisted publicly that Patrese would be given equal status for '91, the general consensus was that Mansell had struck a deal that would place him as team leader, with every privilege such a role usually commands. Surprising then, that the early races of '91 saw the Englishman struggle with reliability while his team mate claimed the headlines.

"The first part of the season, I took everyone by surprise because I was consistently faster than Nigel and he had a huge problem with that," Patrese says. "He was constantly asking what setup I had, what tyres I was using etc because he couldn't understand why I was going much faster than him and it really affected him."

At Monaco, Mansell registered his first finish of the year with second place behind Senna who had just won his fourth consecutive race and though by the time of the British GP in July, Mansell and Patrese had won a race apiece, the momentum was seemingly just starting to gather with the Englishman. He dominated the British race and although Patrese's victory in Mexico was the first of the year for the team, his aspirations for the championship were dealt a blow when the team's technical director Patrick Head pulled him to one side for a quiet word in the Silverstone paddock.

"I was told by Patrick after the British GP that Nigel must be the one to go for the championship," Patrese recalls. "So I said OK, he has won two races on the bounce and was closing on Ayrton who was leading the championship at that stage in the year. It was tough but he obviously had it in his contract so what could I do?"

The next few races saw Senna's points lead fluctuate as Mansell battled to stay in with a chance of the title and as the series headed to Portugal in September, despite a spirited fight back from McLaren and their engine supplier Honda, it was clear a Williams Renault was now the car to have. 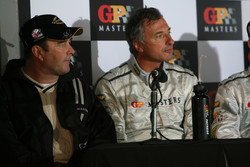 "We arrived at Estoril and I was confident of winning the race, " says the Italian. "I was determined to claim pole position but my car failed to work for qualifying so I had to jump in Nigel's with a few minutes to go. I knew nothing about his car set up and had no time to adjust it to my style. So I go out there, and claim pole position! Then I go on to win the race on Sunday, it was such a great feeling."

Despite finishing the year 4th in the points table behind eventual champion Senna, runner up Mansell and Senna's McLaren team mate Gerhard Berger, it was clear more was to come from the Williams Renault package and that it would be a serious threat to McLaren Honda for 1992. An intense winter test programme followed and would prove to lay the foundations of the team's most successful campaign yet. While Mansell trained in the sunshine of Clearwater, Florida, Patrese confirms he and Damon Hill weren't so fortunate: "Myself and Damon did all the pre-season testing and because I was setting competitive times, I was very confident of going for the championship that year. The car was superb and for its time, miles ahead of anything. The aerodynamics were outstanding but ultimately, the characteristics of that car didn't suit my driving style as much as they did Nigel's."

With the sport now entering a new age, the age of the 'driver aids', Patrese knew that despite undoubtedly making the car considerably faster than it's predecessor, they hindered his natural driving style. They ultimately, cost him any chance of a shot at the championship.

"The '91 chassis required smoothness out of slow corners, which was my strength and Nigel's weakness," the 56 year-old explains. "As soon as the 'gizmos' came in for '92, especially traction control and active ride suspension, all the 'feel' I needed from a car to enable me to drive fast, was gone. Because Nigel was so much stronger than me in the arms, he could carry more speed through a corner with the FW14B, muscle it around the track more aggressively. That was the fastest way to drive it and that's why he became champion." 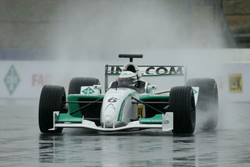 Had it all been a bed of roses working with a driver unique for his time as being the only man usually with a chip, on both shoulders? "I later found out that while I was putting out every bit of information I had on the table during de-briefings in '92, Nigel and his engineer David Brown weren't." Patrese says. "They would confuse me with information that would only help Nigel and not me which was a bit of a shame."

There was no doubt such tactics had been absorbed by Mansell following his personal experiences of such treatment at the hands of Piquet and Prost when he was paired with both World Champions at Williams and Ferrari respectively. Now, they were being used to full effect yet still Patrese found it hard to dislike the Englishman.

"Nigel was a character," Patrese confirms. "It used to make me smile when he would belittle our car performance during the year because everyone knew how good the car was yet he seemed to be constantly saying 'yes the car is quick but most of it is coming from me.' Of course it was but there was no doubt how good that car was. People could see it for themselves. He craved attention, got it then fed on it until he was at bursting point. The team were not at all happy about it and there is certainly no doubt that he was a whiner at times. For sure, many found it annoying but it didn't concern me. I liked him. He was a nice guy." 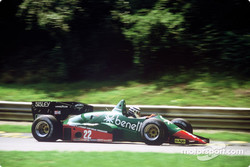 Looking back on Mansell's successful 1992 campaign, how does Patrese rate him? "He was a good driver but certainly not as good as Senna, Prost or Schumacher," declares the veteran. "With Nigel, if the car was quick, he was quick but if it was slow, he was slow. With Ayrton in particular, he could drive any car quickly. He could make a car do things that the rest of us couldn't do and more importantly, he was able to shut problems outside the cockpit and fully focus on driving whereas Nigel couldn't do that. If things were going his way, he was outstanding but the moment things weren't, his head went down and so did his performances, all of which we saw in 1995 when he walked away from McLaren and turned his back on the sport, again.

Patrese enjoyed working with many drivers during his career and is adamant that his intention was never to turn team mates into enemies or cause friction within the teams he drove for.

"I never had a problem with Nigel or any of my team-mates at all," he concludes. "I just always accepted the challenge of trying to beat them."