The annual Formula One winter test takes place at the circuit of Jerez in Spain on December 1-3, 2009. Traditionally a number of drivers have been invited to drive a Formula One car, some of them attend as a reward for their achievements in 2009.

The annual Formula One winter test takes place at the circuit of Jerez in Spain on December 1-3, 2009. Traditionally a number of drivers have been invited to drive a Formula One car, some of them attend as a reward for their achievements in 2009. While others are invited simply to see whether they could be a candidate for a race seat or a position as a reserve driver next year. With an overall testing ban in place until February 2010, some teams also use these three test days to gather data from their car and hope they can use the it for their 2010 car design. 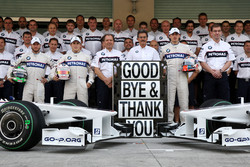 The last races for the BMW-Sauber team in Abu Dhabi.
Photo by xpb.cc.

Although the BMW-Sauber team will pull out of Formula One at the end of this year, it is good to see the team sticks to their promise of giving two talented young Formula BMW drivers a taste of driving the BMW Formula One car. "Depriving these junior drivers of the test we had promised them was not an option for us, even after the withdrawal of BMW from Formula One, BMW remains committed to motor sport and is keen to continue making a contribution to well-structured talent development," said team principal Mario Theissen said.

The former BMW-Sauber team, now back in the hands of its original owner Peter Sauber, is still waiting for the green light from the FIA to take over the thirteenth and last 2010 slot from the retiring Toyota Formula One team. The FIA is expected to publish the definitive 2010 entry list at the end of November.

Renault has until now made no decision about their future Formula One plans, but they also intend to run two cars and test three drivers. Team principal Bob Bell: "Testing is so restricted nowadays, but this young driver test is the perfect opportunity for us to assess rising stars. All of our test drivers have shown great promise and we look forward to seeing what they are capable of as we complete our test programme for the year."

So before the winter test commences, let's get acquainted with the lucky test drivers and take a look at their achievements in motor sport so far, after all, they represent the future generation of Formula One drivers.

Jules Bianchi (born August 3, 1989 in Nice) is a French racing driver, and if his last name sounds familiar to you, that is correct, he is the grand nephew of Lucien Bianchi, a Belgium race driver who competed in Formula One from 1959 until 1968.

"I can't find the right words. I think I will believe it when I sit in the cockpit of the Ferrari," Bianchi said in a statement published on his website, "Ferrari, it's the team I dreamt of when I was a kid. I will keep cool and I know it is just another step and that the road to success is very long if we want to fulfill the goals we have set ourselves."

Gary Paffett (born March 24, 1981 in Bromley) is a British racing driver, and has been McLaren's test driver since 2006 alongside Spaniard Pedro the la Rosa. He has been active in the DTM series for Mercedes since 2003, and won the DTM title in 2005 with 5 race wins. Since 2008 he is eying a permanent Formula One drive, but although he has the support of Mercedes, he so far hasn't succeeded in finding a Formula One seat.

German Nico Hulkenberg (born August 19, 1987 in Emmerich am Rhein) will be the second driver at the Williams team next year, alongside the Nestor of Formula One drivers, Rubens Barrichello. This test will be his first acquaintance with the 2009 Formula One cars. He was already test driver for Williams and has occasionally driven one of the older Williams cars. 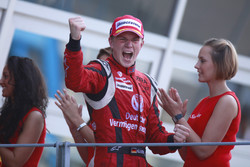 Hulkenberg is a highly successful racing driver, in 2005 he dominated the Formula BMW championship and won the title, leaving his rivals far behind him. In 2006-2007 he joined the German A1GP team, won the title and is still the most successful driver in the history of A1GP. In 2007 and 2008 he became third and first in the Formula Three Euro Series, and this year he won the GP2 series title. Hulkenberg will make his Formula One debut during the 2010 Bahrain Grand Prix.

Hulkenberg about his chances next year: "It's difficult to judge at this stage. As there is a limited amount of testing before the season starts, it will be difficult to get much track time in to prepare, but I hope to be on his pace from the beginning."

American race driver Alexander Rossi was born September 25, 1991 in Auburn, California. In 2005 Rossi was semi-finalist in the Red Bull Formula One American Drivers search with a top 5 finish overall out of over 2,000 candidates. In 2006 he competed in the Skip Barber National Championship. In 2006 and 2007 he participated in the Formula BMW USA series before he moved to Europe to try his luck in the International Formula Master series and came fourth in the championship.

Australian race driver Daniel Ricciardo was born on July 1, 1989 in Perth. In 2006 he won a scholarship into the Formula BMW Asian championship, the Australian claimed two races and scored one pole position that year. In 2007 he entered the European and Italian Formula Renault championships, for 2008 he again competed in the Formula Renault championship and took the title. In 2009 he was active in the British Formula Three championship for Carlin Motorsport, and he has a contract for 2010 to race in the Renault World Series for the Tech 1 team.

Briton Paul di Resta (born April 16, 1986 in Uphall), the cousin of the 2009 IndyCar champion Dario Franchitti, started his career in the British Formula Renault series in 2003 and 2004. For 2005 and 2006 he participated in the Formula Three Euro series, and won the title in 2006. Paul di Resta is now active in the DTM series for Mercedes, and took the second place in the German championship in 2008. He already has tested the McLaren-Mercedes after winning the prestigious McLaren Autosport BRDC Young Driver of The Year Award.

American race driver JR Hildebrand (born January 3, 1988 in Sausalito) won this year's Indy Lights championship and was also given the chance to drive a Formula One car in Jerez. He dominated the 2006 US Formula Ford 2000 series, and took the title by winning 12 out of the 14 races. In 2007 he moved to the Champ Car Atlantic series, and in 2008 he stepped up to the Indy Lights series. During 2009 he also competed in the final A1GP race for team USA at Brands Hatch and finished fourth in the Sprint race. He tried the Force India F1 simulator and afterwards was invited by the team to participate in the team's test days in December. 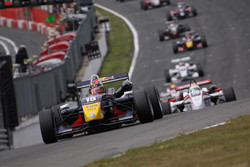 New Zealand's Brendon Hartley (born November 10, 1989 in Palmerston North) is another of those young and very promising race drivers and has tested for Toro Rosso before in 2008. From 2004 to 2007 he was active in the New Zealand Formula Ford and Toyota Racing series. In 2007 he also won the Eurocup Formula Renault 2.0 championship. For 2008 and 2009 he raced in the Formula Three Euro series for Carlin Motorsport. In 2009 Hartley was appointed as official reserve driver for both the Red Bull Racing and Scuderia Toro Rosso teams.

Italian Mirko Bortolotti (born January 10, 1990 in Trento) has previously tested for Ferrari in 2008 as a reward for winning the 2008 Italian Formula Three championship, and made a big impression by setting the fastest time ever recorded (by any driver) at the Fiorano Ferrari test circuit. His name even was mentioned as a possible replacement for the injured Felipe Massa and replacement driver Luca Badoer in 2009.

Briton Mike Conway (born 19 August 1983 in Bromley) won the British Formula Renault championship in 2004 and the British F3 International series in 2006. In 2006 he also moved up to the GP2 series, and in 2007 and 2008 he raced in the GP2 series for the Super Nova and Trident Racing teams. This year he moved to the American Indy series to drive for the Dreyer & Reinbold Racing team. 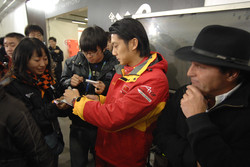 Dutch born Chinese driver Ho-pin Tung (December 4, 1982 Velp, Netherlands) won the 2003 Formula Three Asia series title and was rewarded with a Williams Formula One test drive. From 2004 to 2006 he competed in the German ATS Formel 3 Cup, and won the title in 2006. For 2007 he moved to the GP2 series and in 2008 he competed in the GP2 Asia series. He was also active for team China in the A1GP series. In 2009 he moved to the Superleague Formula and won the last race of the season. This year he also made a name for himself during the ROC in Beijing where he became the ROC China champion.

Brazilian Lucas di Grassi (11 August 1984, Sao Paulo) begun his career in Formula Renault in 2002, stepped up to Formula 3 Sud Americana in 2003. In 2004 he participated in the British Formula Three series, and in 2005 he drove for Manor Motorsport in the Formula Three Euro series and ended third in the championship. For 2006 he moved up to GP2, 2007 he came second in the series, and in 2008 and 2009 third in the GP2 championship. Because of his previous involvement in Manor Motorsport he is now tipped to become a regular driver for the new Manor Grand Prix team in 2010.