DEARBORN, Mich., Oct. 10, 2011 – It was a 10-lap, 10-mile racing event at the Detroit Driving Club in Grosse Pointe, Mich., and billed at the time as “the largest affair of its kind” that attracted the top drivers of the day, generating national attention. 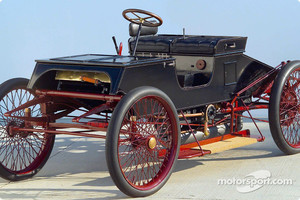 One hundred and ten years later, it has become known as “the race that changed the world.”

Henry Ford’s stunning upset of the heavily-favored Alexander Winton was the catalyst that allowed Ford to attract investors and, less than two years later, launch the Ford Motor Company. The rest, as they say, is history.

Thanks to this race, Ford could take his vision of an automobile that could be a mass-produced, inexpensive, reliable mode of transportation that a majority of people could afford, and make it a reality.

On the 110th anniversary of Ford’s unlikely triumph in “Sweepstakes”, a car he built himself, Ford Racing carries on the spirit of Henry Ford on the track and in showcasing the products of Ford Motor Company.

“When Edsel [Ford] recounts the story of Henry Ford and Sweepstakes, I find myself imagining that day at Grosse Pointe,” said Jamie Allison, director, Ford Racing. “The context of Henry’s attempt as he gathered attention for what he was about to make, and used racing to prove out the products are the very same drivers for Ford continuing to race today. I truly feel that we continue to represent the spirit of what Henry did back then in our passion for racing and the benefits we get from racing as a company.”

For his triumph, Ford won the $1,000 prize and the cut-glass punch bowl trophy that was earmarked for Winton’s home in Cleveland. More importantly, though, Ford won the attention of the financial backers who would help him start the Henry Ford Company and, ultimately, Ford Motor Company in June 1903.

“Every company, through its founder, has key moments, and our moment is back in 1901 which predates the formation of Ford as a business,” said Allison. “When we say that racing is in the DNA of Ford Motor Company, it is true. For everyone at Ford Racing, for Ford employees, and for Ford race fans, it is very exciting and emotional to be able to make that direct link between our racing program and the moment that our founder Henry Ford created what we now know as the Ford Motor Company.”

Over the ensuing 110 years, Ford cars and engines have won thousands of races around the world, and some of the greatest driving personalities to walk the planet have seen great success behind the wheel of a Ford.

In fact, Ford is the only car manufacturer that can claim victories in all the world’s greatest races, including the Daytona 500, the Indianapolis 500, the 24 Heures du Mans and 24 Hours of Daytona, the U.S. Nationals in NHRA, the Baja 1,000, Rally Great Britain, the Bathhurst 1,000 and even the X Games Rallycross competition.

“What Ford has been able to accomplish in motorsports over the last 110 years is remarkable,” said Allison. “We are a company with a very rich tradition and legacy in racing that has been evident throughout our history since Henry started what we all believe is the spirit of Ford Racing.”

Even with success the program, like Ford Motor Company itself, has evolved. Over the years different forms of racing have stepped to the forefront of the Ford Racing program. Key programs like World Rally Championship, NASCAR, Drifting, RallyCross and NHRA Funny Car were decades away from existence when Henry recorded his historic win.

“There has been an evolution of the program in racing,” said Allison, “but Bob Tasca Sr.’s old adage is unequivocally true –‘Win on Sunday, Sell on Monday.’ It all starts by going out and connecting with the fans and going out on the track and winning. There have been different forms of motorsports over the 110 years. If you look back over the last 40 to 50 years you see NASCAR, NHRA and rallying in the last few decades, but we at Ford Racing are taking that to the next frontier whether it is RallyCross or Drifting – all forms of exciting racing.

“All of our programs are still reinforced by the same principle: to go out and showcase our great products and technologies, and connect with fans who love to support winners. And when we win, that bright moment of light shines upon Ford and allows us to showcase those great products to our fans and customers, encouraging them to go out and buy from us.”

After reflecting back on the triumphs of the past 110 years, Allison knows that the future is bright for Ford Motor Company and Ford Racing.

“What sets Ford apart from many companies is the direct link we attribute to a lot of the programs within the company,” said Allison. “Specifically let’s talk about racing. We are here to support Ford Motor Company. As Ford Motor Company looks down the road 10, 20 and even 30 years from now, we see that a new technology like electrification is becoming more prominent. It affects the industry; it affects the environment, it affects the future of our company going forward.

“We, Ford Racing, are interlinked to that future. So, of course, we are talking about using motorsports to advance technologies and showcase advanced technology, whether it is electric power or any other kind of exciting innovation. As the industry and Ford itself advance, I can assure you that Ford Racing is literally linked to that progression – pushing the boundaries of technology in motorsports and at the same time using motorsports to make even better new products and showcase these to the multitude of loyal fans and enthusiasts around the world.

“We think Henry would be very proud.”