Ingram's Flat Spot On Hamlin's Not Sitting Pretty by Jonathan Ingram One more hotly contested motor racing championship to go. And what could be more NASCAR-like than a title decided in a sleepy little burg known as ...

And what could be more NASCAR-like than a title decided in a sleepy little burg known as Homestead? 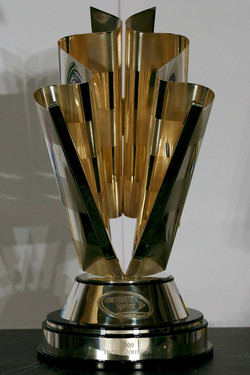 Is it better to be trailing by 15 points, as is the case with Johnson, or better to have at least an edge going into the finale like Hamlin?

From a statistical point of view and the scoring, Hamlin is in the best position. He won the race at Homestead a year ago and led the most laps in his Joe Gibbs Racing Toyota.

"For us, it's about going out and performing like we have every Homestead race I've ever ran," said Hamlin in the pre-race media conference, adding that he's going to focus on winning the race. But that is easier said than done.

"Things have changed so much in our sport since (last year)," said Hamlin. "Obviously the spoiler change has changed the dynamics of the setups. I feel like the cars are much better than what they were last year. Everyone's car is. The speeds at every racetrack really are higher this year than what they've been in years past."

For his part, Johnson regrets not being in the position of leader. He's been the leader entering the Homestead finale every year since his four-year streak of Sprint Cup titles began. Prior to that, he trailed in the points each year at Homestead and came up short in 2004 versus Kurt Busch and in 2005 versus Tony Stewart.

"It's different from recent time, but it is what it is," said Johnson. "In professional sports, things aren't always going to work out as you hope. I wish we were leading the points and had the pressure of defending a championship down here. But I'm making the most of where we are. It's not far from where we are to where Denny is. We're going to have to go out and have a great day on Sunday afternoon, take it from there, see what happens."

OK. So much for the composed point of view on behalf of the pre-race stories. 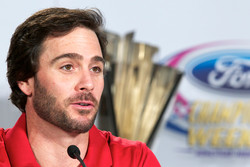 At Phoenix last week, once the checkered flew, it was a different perspective.

Hamlin hovered near doom and defeat after the ecstasy of kicking ass turned elusive due to ponies from his Toyota that proved to be thirsty, forcing a late-race pit stop for fuel that cost him dearly. But after leading the most laps and then falling behind and losing most of his points lead, the Virginia driver was determined not to lose the psychological edge, eventually acknowledging that there can be worse things than leading the championship headed into the final race at a track where his team knows how to win. Still, he talked in the past tense. "We were sitting pretty," he said.

Once a prima donna, Hamlin has refocused on leading his Joe Gibbs Racing team to the promise and relief of a championship in Homestead. It's the sort of resilience everybody looks for in a champion. After weeks of being slagged off as the man who has changed the image of NASCAR and cost the sport some of its fan following, Johnson showed some resilience and fire of his own.

Johnson, who sometimes suffers from making it look easy, coaxed enough laps from one tank of gas in his Hendrick Motorsports Chevy without losing too many positions to close the gap in the title hunt, the sort of determination it takes to finish at the top. Afterward, he shrewdly declared his team was ready to take the title if the boys of Hamlin were not "on their toes," the first direct challenge to the opposition from the driver who always handles interviews with the confidence of a poker player holding at least one ace. This time he played it.

One can forgive Johnson for crowing, because his pit crew -- the one borrowed from Jeff Gordon midway during the race the week before in Texas -- had out-performed the crew of a rattled Hamlin in Phoenix. The week before, it was the Hamlin crew giving Johnson the needle over his under-performing pit crew. 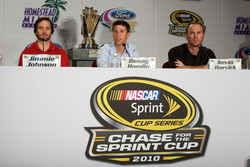 Now one hotly contested title remains between three drivers. As for Kevin Harvick, who trails the leader by 46 points, it's impossible not to count him out after Sebastian Vettel came from third to first in the Formula One season finale in Abu Dhabi. There's no reason whey the Richard Childress Racing driver can't lead the most laps and win on a 1.5-mile track, one of his favorite types of venue.

"For us, there's not a lot for us to lose," said Harvick. "Obviously these guys are a few points ahead of us. We just race as hard as we can. Winning a race makes things a lot better for us. This has been our best racetrack as far as statistics go. So that's a good thing."

With a 15-point difference between the top two, theoretically the race in Homestead could end in a dead heat between Hamlin and Johnson. It's reminiscent of the day in 1992 when owner/driver Alan Kulwicki -- now there was a determined fellow -- finished second to Bill Elliott's Junior Johnson Ford in Atlanta but claimed the title from the redhead by leading the most laps. In Homestead, it could end up in a dead heat with Johnson winning, but unable to clear Hamlin in the points if the latter leads at least one lap and finishes second. It's going to be that close. The number of victories is the tie-breaker, in which case under this scenario Hamlin would beat Johnson 8-7.

It may come down to who leads the most laps and gets the five bonus points. In all cases, somebody's going to have to be holding a pretty wheel under a lot of pressure to claim the trophy and declare an end to this year's Chase for the Sprint Cup.

Will Buxton talks with Jason O'Halloran about his BSB season performance

This Week with Will Buxton: Episode 7

Bottas joins Race of Champions for 2022