Ingram's Flat Spot On: The Ring's the thing

Ingram's Flat Spot On The Ring's The Thing by Jonathan Ingram Nurburg, Germany -- If the 24-hour race at the Nurburgring is not among your top five races to attend before you, well, stop attending races, then perhaps there's still time to ...


The Ring's The Thing
by Jonathan Ingram

Nurburg, Germany -- If the 24-hour race at the Nurburgring is not among your top five races to attend before you, well, stop attending races, then perhaps there's still time to reconsider. 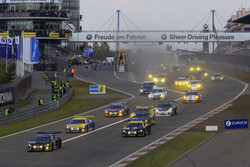 Having heard about the race's incredible atmosphere nearly a decade ago, I still couldn't believe the combustive combination of cars, the Nordschleife circuit and the German fans, who seemed to be found at every inch of fence along the 14 miles of the track built in 1927.

Although the Grand Prix circuit built in 1984 does some justice to the current era of Formula One cars, it's inevitably sterile compared to the Nordschleife -- especially when 198 production-based racers take the start and then hammer around through the dark forest of the "Green Hell" for an entire day and night.

This year's event had a new dimension added to the "combustive combination." The Porsche 911 GT3 R Hybrid made its debut at what amounts to an annual one-race championship of Germany for production cars. I was invited as a guest of Porsche to get a close-up look at this ground-breaking car in an atmosphere that is perhaps the new car's ultimate challenge.

In addition to the hellacious traffic and winding bends through stark elevation changes, the Nurburgring's 24-hour concerns only production-based cars and no prototypes. To win over-all in this race in Germany brings a lot of pressure and prestige. Having both ridden around the Nordschleife prior to the race in a Porsche Cayenne Turbo at a mere average of 95 miles an hour and having walked significant sections of the circuit during the race, winning this event in what amounts to a GT2 class car would appear to be far more difficult than winning in that same class at the eight-mile Le Mans track. 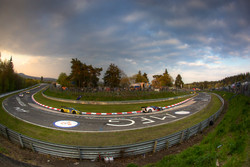 Because of the multitude of classes at the Nurburgring, the disparity in speeds is enormous. The front-runners had to deal with VW Golf, Ford Fiesta and Opel Astra entries that are sometimes more than two minutes a lap off the leader's pace. American Leh Keen, who co-drove the runner-up Hankook Team Farnbacher Ferrari 430 GTC, found the overtaking pretty hairy in his first race at the track. "It seems like it's as much as 80 miles an hour difference sometimes," he said. Joerg Bergmeister, who literally grew up at the Nordschleife riding in the backseat of the family car during his father's tours of the track, has a similar viewpoint. "It's a track where you can really pay a big penalty for a mistake."

In the end, the BMW M3 GT2 of the factory's team took the over-all victory after the 911 GT3 R Hybrid blew its flat six engine just before the 22-hour mark. That brought Pedro Lamy a record-tying fifth victory in the 24-hour as part of the driving team of Jorg Muller, Uwe Alzen and Augusto Farfus.

To recite only the racing scenario is to miss the point at the Nurburgring, where the pressure and speed is matched by a palpable joy of racing. On track there's a cacophony of engine notes and cars constantly at one another's fenders through the dives, curves and uphill segments that never seem to lack camber changes and subtle bends. Around the circuit's perimeter, the predominantly working class fans are gathered like celebrants at a huge Bacchanalia.

They watch from temporary but very stout metal scaffolding -- erected after being hiked into the circuit from parking lots several hundred yards out. There are various other forms of temporary seating along the natural amphitheatre created by the hills of the Eifel Mountains. You can tell where the "hot spots" of racing action occur, because that's where the double-deck scaffoldings are usually found. 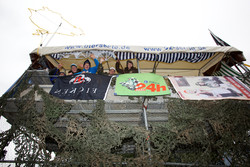 During a four-kilometer, Fellini-esque hike through the woods from the Pflanzgarten segment to the Karussell with fellow American journalists, there was an amazing array of camp sites. We came across a wedding ceremony, an outdoor restaurant featuring a giant temporary rotisserie loaded with mouth-watering hams and an open-air disco/camp site marked by a rotating searchlight plus Jimi Hendrix-sized amplifiers. When night fell at the Karussell, it was hard to figure which way to go to avoid the screaming displays of fireworks whizzing close overhead. Needless to say, at various spots there were mountains of beer cans and bottles, including one display that spelled out Bitburger in giant letters made from bottles. In the end, the estimates of over 200,000 fans seemed accurate enough.

On the pit road, meanwhile, several teams share each pit box and garage, which creates an atmosphere that leans toward hearty engagement rather than bitter competition.

When the Hybrid had to be moved into the pit box for repairs to a broken header in the 20th hour by Manthey Racing's works team, the grandstands had already begun to fill up for the finish. When the Hybrid emerged from the pit box after a 12-minute halt, a cheer went up from the grandstands opposite the pits as it returned to combat with the lead over the rival works BMW still intact. By time the BMW took the checkered flag in first with a robust greeting, the entire length of grandstands used for the Grand Prix circuit were jammed -- as was the pit road, where teams were celebrating the effort of one another as well as commiserating over the legendary bad Nurburgring luck suffered by many. 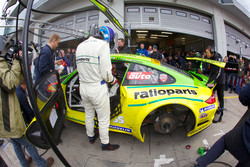 Much of the development work for BMW's winning M3 has been done by Rahal Letterman Racing's team in the American Le Mans Series and it seems likely that the same locale will eventually be used to develop the Porsche 911 GT3 R Hybrid. It was confirmed by members of Porsche Motorsport's hierarchy that the car will race at the Petit Le Mans in Atlanta in October -- as perhaps a test bed for a regular ALMS entry in 2011. The Hybrid will also eventually be featured in at least one of Porsche's one-make series around the world, either the Supercup, one of the many nationally-based Carrera Cups (likely the German version) or perhaps IMSA's Patron GT3 Challenge.

It remains to be seen how the rules will be drawn for hybrids in 2011 at Le Mans -- or whether Porsche will participate. My guess would be that the rule makers at the Automobile Club de l'Ouest will limit the amount of kilowatt power for electric motors (based on whether a car has one or, like the Porsche, two) and will limit the fuel tanks of hybrids to match them fairly closely in terms of mileage to other entrants relying on combustion engines. Hybrids will inevitably carry more weight. Given that the ACO has handed diesels a clear advantage in terms of power versus gasoline engines for several seasons in the prototype division, one doesn't necessarily expect a level playing field.

Despite losing for the first time at the Nurburgring in five years, Porsche and its partner Manthey team had mostly smiles over the performance at this year's race. Both a 911 GT3 R, knocked out by a Golf that bounced off the barriers in the seventh hour, and the GT3 R Hybrid fell out while leading. The entries also included a stock 911 GT3 RS from Porsche AG driven to the race on the German roads, which finished 13th over-all before heading back to Weissach over those same roads.

Beware of one thing. After a 24-hour at the Nurburgring, all other circuits and 24-hour races are likely to be viewed with a different perspective.