Mario Andretti to be honored by RRDC at Long Beach

HILLIARD, Ohio - Mario Andretti, the world's most recognized race-car driver, will be honored by the Road Racing Drivers Club at the "RRDC Evening with Mario Andretti presented by Firestone" in Long Beach, Calif., on Thursday, April 10, prior to the running of the Toyota Grand Prix of Long Beach. This is the RRDC's sixth consecutive annual banquet honoring auto racing's most influential leaders.

Previous honorees were Dan Gurney, Parnelli Jones, Roger Penske, Jim Hall and Brian Redman. These "RRDC Evenings" are acknowledged as one of the highlights of the auto-racing social calendar, drawing fans and luminaries from all forms of motorsports.

The Firestone brand will return as presenting sponsor of the RRDC banquet for the fifth straight year. 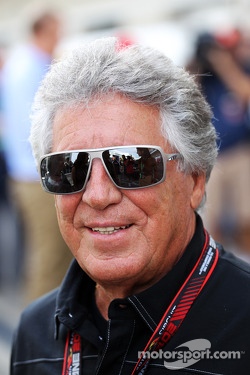 "Firestone has a long-standing relationship with Mario Andretti and is honored to be part of this year's Road Racing Drivers Club banquet recognizing his unequaled achievements," said Lisa Boggs, Director of Bridgestone Americas Motorsports. "He is certainly deserving of this recognition because it wasn't just the winning that made him a champion, but the way he did it. His legacy represents the essence of racing."

The dinner's proceeds will help support the RRDC’s young driver initiatives, including its groundbreaking SAFEISFAST.com program and the Team USA Scholarship, which the RRDC has backed since 1997.

The RRDC Evening with Mario Andretti presented by Firestone will be held on Thursday, April 10, at the Hilton Hotel, 701 West Ocean Blvd, Long Beach, Calif., with cocktails at 6 p.m., and dinner at 7:15 p.m. Tickets are $200 per person ($175 for RRDC members), if purchased in advance, and space is limited. Sponsor packages are also available. This event is expected to sell out quickly. Early reservations are recommended. Please contact Jeremy Shaw at rrdc2@cox.net.

Widely regarded as the greatest race car driver of all time, Mario Andretti was born in Montona, Italy, in 1940. When World War II ended, the Andretti family found themselves trapped inside a communist country. By 1948, the family was living in a refugee camp, where they remained for eight years. Once U.S. visas were granted, the family of five left to begin a new life in America. With $125 and virtually no English language skills, they set sail to New York Harbor in 1955. They soon settled in Nazareth, Pa., where an uncle lived.

By 1959, Andretti began racing stock cars in his adopted hometown. That was the start of an illustrious 36-year career that saw the versatile driver compete and win in every discipline he entered – midgets, sprint cars, dirt track cars, stock cars, Indy cars, Formula One, Formula 5000 and sports cars.

Today, his legacy continues with the Andretti Winery in California, a petroleum distributorship and other business interests. In 2006 he received the title of Commendatore from the Republic of Italy, a result not only of his spectacular racing career, but also his epic life story as a classic example of the immigrant who made good in America. In 2008, the Library of Congress added him to its Living Legends list. The Living Legend award honors artists, writers, activists, filmmakers, physicians, entertainers, sports figures and public servants who have made significant contributions to America’s diverse cultural, scientific and social heritage. “There is no question that the name Mario Andretti is a household word worldwide," said Bobby Rahal, president of the RRDC. "He is truly the quintessential race-car driver with accomplishments that are legendary. It is a privilege for the RRDC to honor him."