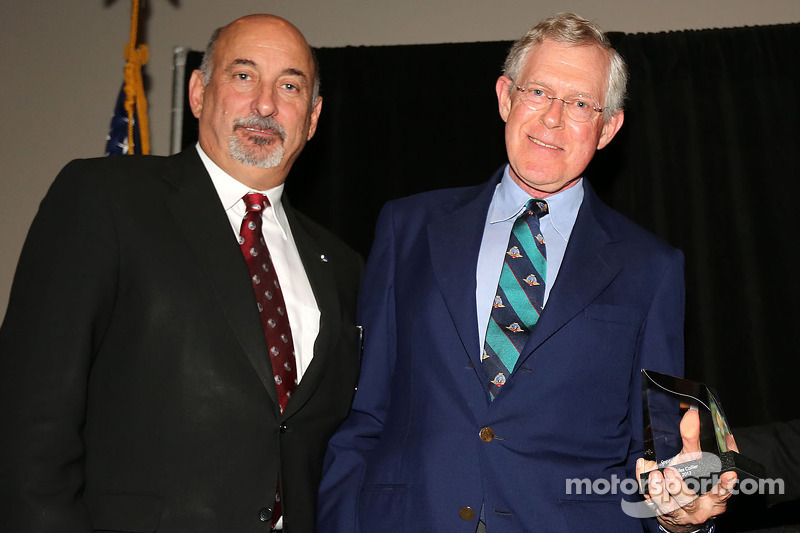 This is considered the top award in motorsports for amateur, vintage/historic or semi-professional drivers. The recipient is selected by Akin's son Bobby, RRDC members Brian Redman and Archie Urciuoli, and approved by president Bobby Rahal.

DAYTONA BEACH - Miles Collier, an artist, investor, philanthropist and noted authority on historic automobiles, was named the recipient of the 2012 Bob Akin Award by the Road Racing Drivers Club at a dinner prior to the running of the Rolex 24 At Daytona, the season opener of the 2013 GRAND-AM Rolex Sports Car Series. 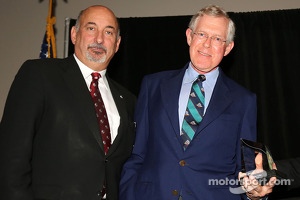 Each recipient of this honor, considered the top award in motorsports for amateur, vintage/historic or semi-professional drivers, is selected by Akin's son Bobby, RRDC members Brian Redman and Archie Urciuoli, and approved by RRDC president Bobby Rahal.

The distinctive trophy was conceived by the RRDC in 2003 to honor the memory of longtime RRDC member and past president Bob Akin, who lost his life in a racing accident in 2002.

The trophy was designed by Steuben Glass in Corning, N.Y., and is given to a driver who best exemplifies the extraordinary qualities and characteristics that Akin represented, including a passion for motorsports and automobiles, a high level of sportsmanship and fair play, and who has contributed to the sport of motor racing.

A retired business executive, Miles C. Collier is the founder of the Revs Institute for Automotive Research in Naples, Fla., which includes the Collier Collection, housing more than 100 important historic cars and bicycles from around the world. He is a practicing artist as well as the founding supporter of the Stanford-Revs initiative. For the last ten years, Collier has conducted a biennial symposium on Connoisseurship and the Collectible Automobile that brings together automobile collectors and faculty from around the world to discuss critical issues in collecting and preserving important historic automobiles.

As a race-car driver, Collier competed in SCCA New England Region in an E-Production Porsche Speedster in the late '60s and '70s. He raced vintage cars in the early '80s, partnering with Bruce Jennings in Porsches, and is the first recipient of the SVRA Driver of the Year Award in 1984.

Collier’s interest in art was nurtured at Yale University where he received a Bachelor’s Degree in Painting. However, family business intervened. After receiving an MBA from Columbia University, his business career was culminated after 25 years as Managing Partner of Collier Enterprises, in the 1995 decision to make painting his next career. In 1996, he entered the New York Studio School of Drawing, Painting and Sculpture, where he studied for three years with the noted Graham Nickson. Today, he paints professionally.

He serves as Chairman of the Board of Trustees of Eckerd College, a small private liberal arts college with a national reputation.

Collier was presented the award by Urciuoli and Rahal. "Bob Akin was regrettably lost to us a little more than 10 years ago," said Urciuoli. "Those who knew Bob knew that he was a hell of guy, a hell of a businessman, a hell of a racer. He was a trustee of the Hackley School (Tarrytown, N.Y.) and ran a very successful business. His Bob Akin Motorsports was a mainstay in historic racing and he did a lot for the sport in general. He was a great raconteur and authored many articles about motorsports and the like.

"We're pleased to present this award to Miles Collier. Everyone who has had the pleasure of visiting his museum in Southwest Florida, as I have on several occasions," added Urciuoli, will be awe-inspired by the great machinery there. It's a real tribute to our sport, I think, that some of these cars which are priceless actually get out and get exercised on the race track in the way they were meant to be."

A message from Bobby Akin, who was unable to attend, was read during the presentation: "Miles had done more for the sport he loves than I could hope to recount. If I had to point out one thing that I find truly amazing is that Miles is constantly providing priceless cars to countless historic events so that people can enjoy seeing these cars race, often in the hands of some of the great drivers of our time (RRDC members Brian Redman, George Mandeville, John Morton, et al) all on his time and his financial risk. Sometimes they don't come back just the way they left the shop. My guess is Miles says, 'Well, it needed some work anyway.'"

About the RRDC:
The Road Racing Drivers Club was formed in 1952 as a way to give champion drivers a say in their sport, particularly in the areas of safety, and has evolved to serve the future of road racing by mentoring new drivers on both amateur and professional levels. The Club’s membership includes leading industry professionals, race officials and motorsports journalists, in addition to prominent racing names.