This organization was founded with the mission to give members a voice about safety concerns at racing tracks all over the world.

Sebring, Fla. - The Motorsport Safety Foundation debuted today at Sebring International Raceway, introducing the non-profit organization dedicated to improving safety standards in motorsport. This organization was founded with the mission to give members a voice about safety concerns at racing tracks all over the world, and is committed to not only discussing and researching these concerns, but to rectify them as well.

The Motorsport Safety Foundation honors the memory of Sean Edwards, a professional racecar driver who was killed at a track in Australia that was not equipped with the minimum safety barriers. Founded by Sean's teammate and friend, Henrique Cisneros, the Foundation aims to prevent injury or death in motorsports by helping to solve fixable issues at tracks like the one at which Sean lost his life.

The Foundation is looking for members who are devoted to seeking safety in motorsport. These members may contribute to safety forums, collaborate on and donate to projects, and have access to a number of databases and media to help with education and awareness in the community. 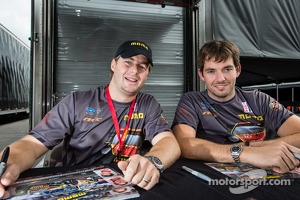 The Foundation also announced their first initiative and flagship program, Adopt a Corner. Adopt a Corner is committed to helping racetracks cope with the changing economics of the sport by finding donors to help offset the high costs of sophisticated crash barriers. It provides an individual, company, or organization the opportunity to donate a safety barrier upgrade in exchange for a long term branding contract of a chosen racetrack. All barrier upgrades are to FIA standard and will provide an increase in crash protection compared to the current barriers in place.

Henrique Cisneros is joined on the MSF Board of Directors by fellow racers Dr. Jim Norman, Mark Llano, and Eduardo Cisneros. Other directors on the board include Beaux Barfield and Martyn Thake. The Directors have been involved in motorsport for many years, and Dr. Norman has extensive knowledge on the medical effects of a high-impact collision. As Race Steward for a number of racing series, Beaux Barfield contributes vast experience with motorsport rules and safety regulations, as does Martyn Thake. Thake also has performed numerous track inspections and assisted with track designs, and will supply further guidance to the Foundation.

For more information and to become a member of the Motorsport Safety Foundation, please visit www.motorsport-safety.org.