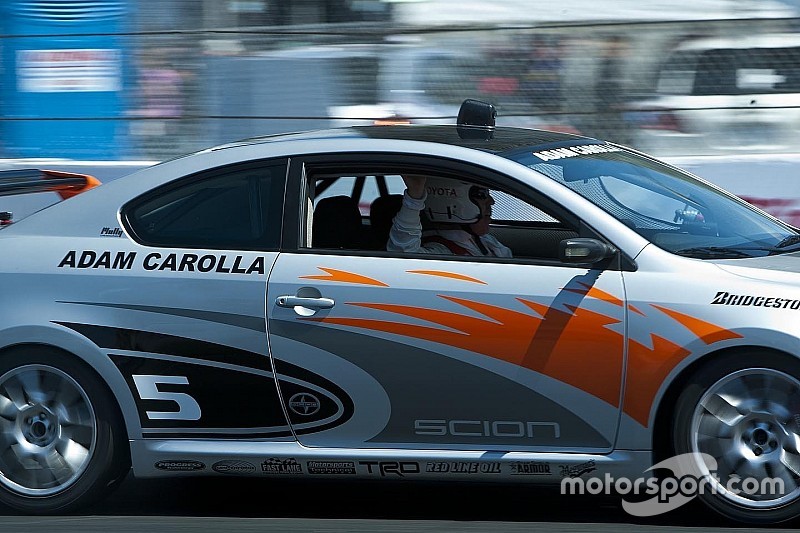 The 40th anniversary of the Toyota Pro/Celebrity Race will consist of former winners of the event, plus the Senior Vice President of Automotive Operations for Toyota Motor Sales: Bob Carter

Actors Stephen Baldwin, Frankie Muniz, Brian Austin Green and last year’s overall winner, Alfonso Ribeiro, are among the participants from film, television and sports, who will return to compete in the 40th anniversary of the race.

The event will take place April 16th on the 1.97-mile street course in downtown Long Beach, Calif., as part of the 42nd Toyota Grand Prix of Long Beach weekend.

“At Toyota, we wanted to do something unique for this final race,” said Ed Laukes, vice president of marketing, performance and guest experience for Toyota Motor Sales (TMS), U.S.A. “By hosting a field comprised mostly of past Toyota Pro/Celebrity winners, we anticipate this to be the most competitive race in the event’s history with a diverse field of celebrity and professional drivers.”

“This should be a thrilling race with so many of the participants past winners here at Long Beach,” added Jim Michaelian, president and CEO of the Grand Prix Association of Long Beach said. “It will be interesting to see who best recalls the racing technique that will enable them to once again stand on top of the podium."

Celebrity/ Overall winner in 1989. Most recently starred in “Dolly Parton’s Coat of Many Colors.” Golden Globe winning actor best-known for roles in “Silver Spoons,” “NYPD Blue” and “Get Him to the Greek.”

Celebrity winner in 1990. He has starred in film, television and radio. Best-known for his roles in “The Usual Suspects” and “The Flinstones in Viva Rock Vegas.” He also appeared on “Celebrity Apprentice” and “Celebrity Fear Factor.”

Celebrity/ Overall winner in 1994 & 1995, Pro/ Overall winner in 2015. Currently the host of “America’s Funniest Home Videos” on ABC and “Unwrapped 2.0” on the Cooking Channel. Known for his iconic role of Carlton on “Fresh Prince of Bel-Air” and in 2014, he took home the coveted Mirror Ball trophy on “Dancing With the Stars.”

Celebrity/ Overall winner in 2002. 12-time Olympic medalist swimmer, who was named as one of the “Top Female Athletes of the Decade” by Sports Illustrated. In 2002, she was the first woman to win the Toyota Pro/Celebrity race.

Pro/ Overall winner in 2004. “Mad Max,” a stock car race driver has competed in many top-level motorsports events including the Le Mans 24 Hours, Formula One and Champ Car. He has three Champ Car victories.

Celebrity winner in 2004. Currently co-starring in HBO’s “Ballers,” after a stint on CBS’s “The Good Wife.” He has starred in over 100 movies, but is best-known for playing ‘Shooter McGavin’ in “Happy Gilmore.”

Celebrity winner in 2005. Starred in “Sharknado: Heart of Sharkness,” and best-known for his role in “Malcolm in the Middle.” His diverse resume also includes race car driver, drummer of pop-rock group’s Kingsfoil, and Ambassador for the Armed Forces Foundation.

Celebrity winner in 2010. An actor, director, and producer, who came to fame on “Beverly Hills, 90210,” recently starred on “Anger Management” on FX. He’s also known for roles in “Desperate Housewives,” “Smallville” and “Las Vegas.”

Pro winner in 2011. He was once the youngest, most successful drift competitor in Japan, and in the U.S. With numerous Top 3 finishes in national and international drifting competitions, his racing career has just begun.

Celebrity/ Overall winner in 2011. A television, theater and film star, he will be seen in the June releases of “Teenage Mutant Ninja Turtles: Out of the Shadows” and “Independence Day: Resurgence.”

Celebrity/ Overall winner in 2012, Pro winner in 2013. He is best known as a comedian, actor, radio personality, television host and New York Times bestselling author. He can be heard daily on his podcast “The Adam Carolla Show.”

Celebrity/ Overall winner in 2013. A NASCAR analyst for NBC Sports, he can also be seen in History Channel’s “Lost In Transmission,” and as co-host of “Top Gear USA” which just finished filming its sixth season.

Celebrity/ Overall winner in 2014. Actor who stars as ‘Jake Rosati’ in MTV's hit series “Awkward.” He recently appeared in the Beach Boys bio-pic “Love & Mercy” and “The Stanford Prison Experiment.”

Celebrity winner in 2015, and 7-time charity auction winner. A retired insurance executive, he has participated in this race six times, donating a total of $417,000 to “Racing For Kids.” He is also an executive producer of “Road Hard,” starring Adam Carolla.

Doohan, Jones to be inducted into Hall of Fame