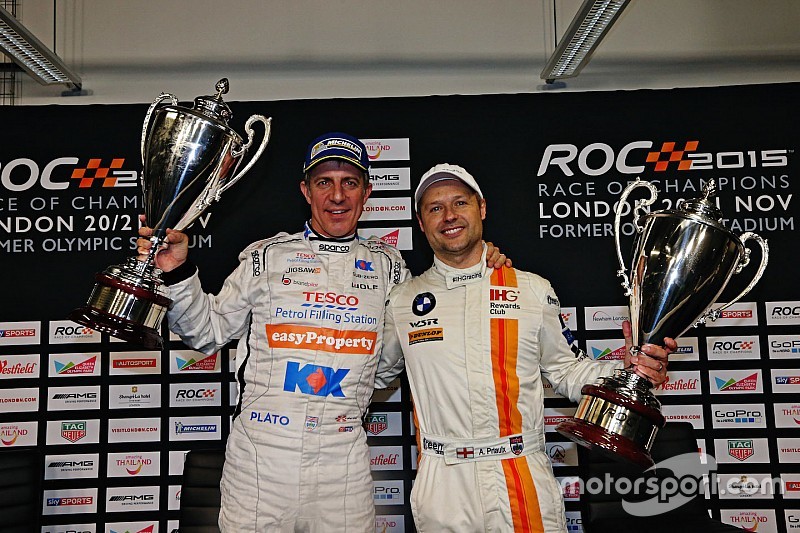 Priaulx and Plato had previously made it to the Nations' Cup final in 2010, but lost out to Vettel and Michael Schumacher, who were in the middle of their streak of six consecutive victories.

And while it looked like Hulkenberg could help Vettel to a seventh Nations' Cup in 2015, the Force India driver having been undefeated until the final, a clean sweep of heats from Priaulx powered him to the top step alongsidePlato.

The quarter-finals for the Nations' Cup, running under a revamped straightforward knock-out format, almost delivered a surprise right from the get-go, with reigning winners Petter Solberg and Tom Kristensen facing stiff opposition from the Team Americas duo of Ryan Hunter-Reay and Jose Maria Lopez.

A slide from Lopez allowed Kristensen an easy win in the first heat, but Solberg spun in Heat 2, giving a point to Americas - albeit Hunter-Reay eventually came up a tenth short of Kristensen in the decider.

Meanwhile, Priaulx and Plato had ended Brazilian duo Felipe Massa and Nelson Piquet's ROC reunion in the preliminary Round 1 and went on to get one over the Jolyon Palmer/Pascal Wehrlein Team Young Stars, who had themselves eliminated Romain Grosjean and Chris Hoy earlier on.

While Palmer actually managed to defeat Plato, Priaulx beat Wehrlein and then secured his team's progression to the semu-finals with a win over Palmer.

The first heat of the semi-finals saw a bitter blow dealt to the reigning champions at Team Nordic, as Vettel came from a tenth down at halfway to narrowly edge ahead of Kristensen in the Ariel Atoms, giving Germany the first point.

And a similar scenario unfolded over Heat 2, where Hulkenberg trailed Solberg in the Mercedes GT S match-up early on, only to come back in the latter stages and deny the reigning winners a decider.

The other, all-British semi-final, however, went to a Heat 3, with Priaulx's win over Buncombe in the KTM X-Bow negated by Button's narrow triumph over Plato in the Mercedes.

However, it was all leading up to a very one-sided final heat, with Button struggling with the gearshifts in the Ariel Atom and allowing Priaulx a comfortable win.

The first heat of the showdown saw a brief scare for Vettel, who got on the throttle too early on the Radical SR3 machine. He managed to get it stopped in time to prevent a false start, but had no answer for Priaulx's form, finishing a second behind.

Hulkenberg then stepped up in the Mercedes GT machine, establishing an early lead over Plato and holding on despite a warning flag for touching the barriers.

But in the final showdown, Priaulx took out a slight lead on his first lap and then appeared untouchable, winning by two seconds to confirm a home triumph.

Your complete guide to the Race of Champions