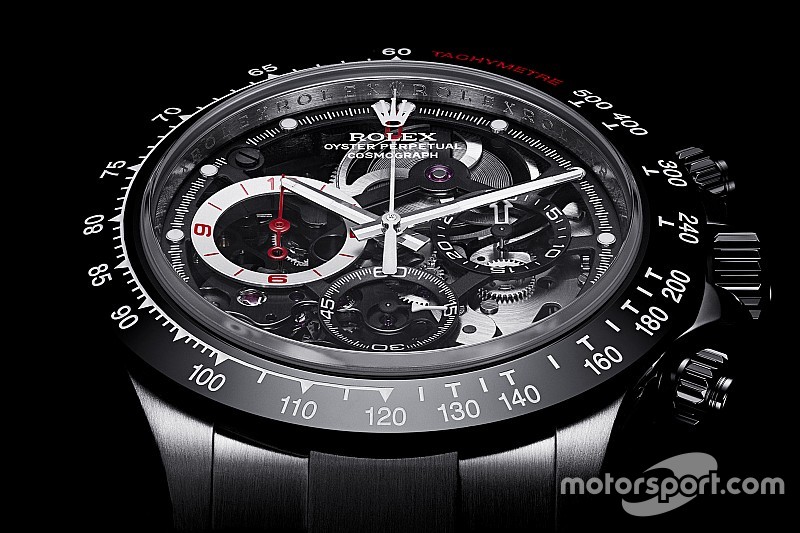 Barrichello twice finished as runner-up in the F1 standings while he was team-mate to Michael Schumacher, and he continues to race in the Brazilian Stock Car Championship – where he won the 2014 title.

The Brazilian also sporadically competes in the IMSA Sportscar Championship, including its flagship season-opening 24 Hours of Daytona round. He has raced in the iconic enduro four times, achieving a best result of second overall in 2016 at the wheel of a prototype Chevrolet Corvette that he shared with Ricky and Jordan Taylor plus Max Angelelli.

Through Swiss watch manufacturer Artisans de Geneve, which specialises in one-off commissions that modify renowned and pre-existing watch designs, he has developed his own watch.

“I have always had a thing for the Daytona,” Barrichello said. “My timepiece is unparalleled, it bears details that make it as unique as a Formula 1 car, as my car.

“A different movement, particular shapes, exceptional curves and an extraordinary mechanism – I love it!

“Artisans de Geneve has managed to achieve a technical prowess, each detail is perfectly executed with the same concern for extreme perfection that we find in the racing world.”

The watch, which is called ‘La Barrichello’, takes “a highly mechanical style” and will be produced in a limited production run.

Its design features lots of straight lines, and the project has been assisted by beveling expert Philippe Narbel. Almost all of the work has been carried out by hand, including the sandblasted lugs, inner angles and DLC black pushers.

The watch face features three red and white arrow-shaped hands, a matte dial and ceramic bezel, while the underside is inscripted with Barrichello’s name. The rotor, which is made from carat gold, is inspired by the shape of Barrichello’s car trim and the hand-polished steel balance bridge alone took seven hours to make.

Olympics-style FIA Motorsport Games to be launched this year