Richard Burns' life came to an end Friday, November 25, 2005. The 2001 World Rally champion had been diagnosed with a brain tumor in November 2003, forcing his retirement from WRC competition. 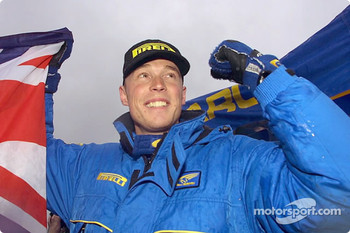 The ace rally driver fainted prior to the 2003 season's final event in Great Britain, ending his career on November 2nd. Burns' condition was determined to be an astrocytoma and the normal treatment for this form of a tumor is radiation.

In 2001, there was a celebration at the end of the Rally of Great Britain when Burns, known as the "Lionheart", became the first Englishman to win the WRC title -- and to this date, Burns still is the only rally driver from England to have taken the WRC championship.

Just weeks after the celebration, the Subaru World Rally Team took their newly crowned championn to court, leaving his future in the hands of fate London's High Court. Burns had announced prior to the rally in his homeland that he had signed a contract with the French-based Peugeot team for the 2002 season. According to the Japanese Subaru team, Burns was still under contract with them.

In mid-December of 2001, Burns and Subaru settled their dispute out of court. Then, in 2003, after two seasons with Peugeot, and just prior to the brain tumor announcement, Burns had signed a two-year contract to return to the Subaru team.

Burns' accomplishments in WRC started when he joined the Mitsubishi team in 1998 before moving to Subaru in 1999 where he remained for two seasons.

Born in Reading, England on January 17, 1971, the English rallyist was known for his consistency and speed. His first ride was at the tender age of eight when his father, Alex, let him drive a Triumph in the fields near their home.

After being diagnosed with cancer in late 2003, Burns underwent radiation therapy and chemotherapy, and was released from the hospital in the summer of 2004. However, he returned to hospital for surgery in April of this year in what was ultimately an unsuccessful bid to remove the tumor.

It is with sadness that the World Rally community and the WRC fans now bid farewell to the Englishman whose biggest battle in life became surviving -- a battle he finally lost yesterday.