While many voices in the automotive world may be screaming that the future of motoring and motorsport lies with electric cars, there’s a counter argument that hybrids could well be the way forward.

While the rise of all-electric competition cars is a fairly recent thing in the motorsport world – Formula E was the first series to really make headlines, and that started in 2014 – hybrid technology has been around a lot longer and has already benefited from many years of refinement. And, thanks to additive expert Liqui Moly, that development is continuing at pace.

The first notable hybrid racing car was the Panoz Q9, which ran at the Le Mans 24 Hours back in 1998. Admittedly, that proved to be a bit of a false dawn as the weight of the early battery tech prevented the car, nicknamed ‘Sparky’, from qualifying for the race. But Toyota really took the hybrid ball and ran with it. Its first effort at a racing hybrid came with the 2006 Denso Lexus GS 450h touring car. On its debut in the Tokachi 24 Hours (a round of the Super Taikyu series in Japan) it finished 17th from a field of 33 cars.

And there’s a reason Formula 1 hasn’t, and perhaps never will, go fully electric. After adopting KERS for 2009, the formula went full hybrid with both kinetic and heat regeneration systems from 2014, and has already stated that grand prix racing will also commit to hybrid powerplants through its next engine cycle set to be introduced from 2025.

Hybrids mix the efficiency and raw power of electric motors with the proven performance and convenience of internal combustion to provide a ‘best of both worlds’ solution. However, there can be some downsides for your hybrid powertrain on the road. And it’s something Liqui Moly already has an answer for.

With most plug-in hybrid vehicles usually achieving around 50 miles of range on electric power only, it means there could be a fair few school runs or supermarket trips before the internal combustion engine even gets fired up.

While modern engines themselves have a long shelf-life, what they run on often doesn’t, as Liqui Moly USA’s Vinny Russo explains: “The fuel mileage on a hybrid can be excellent as often they can run purely electric for a lot of the time. But when you use a hybrid like that there are a few things for the fuel side of operation that aren’t so hot.

“For one the motor rarely gets warm in that situation because there’s a lot of stop and go, so a lot of stuff in the motor doesn’t reach the right operating temperature to work correctly. But perhaps the biggest issue is the fuel, which ends up sitting around for a lot longer than usual.

“When fuel sits it begins to age, oxidise and go stale, and when that happens it loses efficiency in combustion and doesn’t have the punch it should have.”

So, the experts at Liqui Moly came up with a solution: the Hybrid Additive, which aims to both preserve your hybrid’s fuel supply, while also protecting the internal combustion side of the vehicle when you do need to fire it up. A single dose can treat up to 20 gallons of fuel and acts to slow down the oxidisation of your fuel, keeping it cleaner and more efficient for longer, whilst also preventing any additional wear on your engine. 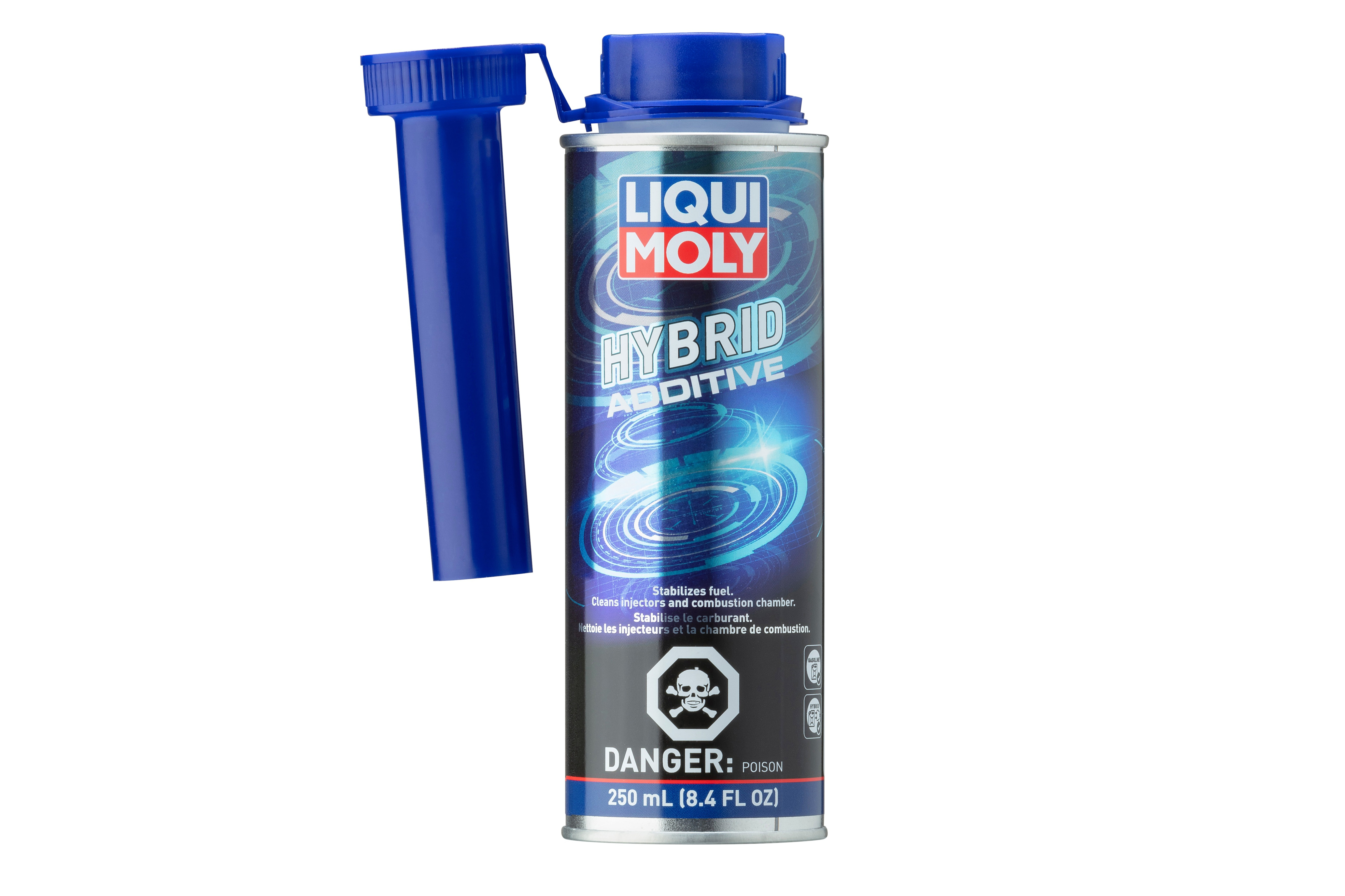 “The Hybrid Additive helps to stabilise your fuel, slowing down that oxidisation, so it stays fresher for a lot longer, and that’s hugely important in a hybrid because – when those cylinders don’t turn on often – it’s important to give them the right conditions to run with when you do need them,” adds Russo.

“In addition, it cleans all the muck and carbon deposits that accumulate in the fuel system and prevents corrosion. That alone means that when your fuel is needed, you won’t get any particles from reactions with the fuel tank or the pump or anything else going through the system, you’ll just get pure fuel, as you should. It also cleans off the carbon from your fuel injectors, which keeps your spray pattern nice and helps keep your emissions low.

“It’s great for emissions, great for drivability and helps to keep the performance of your hybrid car like it was when it was new.”

If you own a hybrid, Liqui Moly’s range of products could be just the answer you need. More information can be found on its website, liqui-moly.com.

Can Richards become new FIA chief? Why Todt’s FIA successor could be cut from the same cloth