Weekend Round Up – Audi Motorsport

The VLN resumed at the Nürburgring this weekend, round six with the Six Hour ADAC Ruhr-Pokal-race. A total of sixteen Audis took part, which included six Audi R8 LMS ultra cars, multiple TT RS cars and more. The big news was the three car team entered by Phoenix Racing, spearheaded by the return of Hans-Joachim Stuck alongside his two sons in the #15 Audi. Saturday morning started very well as the #37 Phoenix Audi took pole position. Unfortunately Hans-Joachim Stuck suffered a crash during qualifying. The damaged #15 Audi was unable to compete in the six hour event due to the sustained damage. The race itself finished with excellent performances from the Audi teams. Phoenix Racing finished second and third with their two remaining Audi R8 LMS ultra cars, and the Audi TT RS teams took victory in the SP3T and SP4T classes.

The penultimate round of the 2013 Pirelli World Challenge headed to Sonoma, round eight of the season. Four Audis were entered this weekend. Three Audi R8 LMS cars from GMG Racing, and one Audi R8 LMS ultra from DragonSpeed. This was the North American debut of the Audi R8 LMS ultra. The Audis placed well during practice and qualifying yielded the highest placed Audi in fourth, the #14 car of James Sofronas. It was a chaotic start to the race, which saw both championship contenders spun around in different incidents on the first lap: Sofronas in the Audi and Johnny O'Connell in the Cadillac. Sofronas was able to recover, helped by an early safety car period, and finished the race in third place, retaking the championship points lead in the process. Duncan Ende was the highest placed Audi, having taken second place. Elton Julian finished fifth followed by Bill Ziegler in eighth place, all four Audis within the top ten.

The German DMV Touring Car Challenge was in Austria this weekend, hosting round six at the Red Bull Ring. The RS Tuning Audi R8 LMS ultra was entered at the event. Suzanne Weidt was again behind the wheel of the #8 Audi in Austria. The car continues to run with the original 2013 rear diffuser, as has been the case for all the 2013 Audi R8 LMS ultra cars which have competed in the DMV TCC this season. In Austria there was more than just one Audi on the DMV TCC gird. Two more Audi teams joined the series for this event. The first entrant was Joachim Duscher, a regular STT competitor, in his ex-ROC Audi 80. The second team was Christoph Düpré in the Düpré Motorsport Audi RS 5, which has also been seen in the VLN and Nürburgring 24 Hours this year.

The AvD 100 Meilen was also held at the Red Bull Ring this weekend, alongside the DMV TCC. The RS Tuning Audi R8 LMS ultra was also seen competing in this endurance race, with the Audi wearing the number #88 on its side. Knockhill in Scotland was the setting for round seven of the British Touring Car Championship. Both Rob Austin Racing Audi A4 NGTC cars were entered, driven by Rob Austin and Will Bratt. Rob got the weekend off to a good start by setting the pace in free practice one. He continued this good form by highlighting the day with pole position for race one. This was Rob Austin’s first BTCC pole, and the first Audi on pole in the BTCC since 1997. Race one saw Austin finishing third, followed by second in race two and fifth after the reverse grid in race three. His teammate Will Bratt had a difficult day, but he was able to recover to eleventh in race three.

The Norwegian NBF GT Racing Championship held round four at Jylland. This series sees a number of Audi race cars competing, including: 2007 Audi A4 DTM R13, Audi A5 TDI, Audi 80 and Audi RS 4.

The Oberhallau Hillclimb was held in Switzerland. Wolf-Power entered a number of cars, including a modified APR Audi TT RS and an Audi A4 STW.

The French Rallycross Championship held the Pont-de-Ruan -Sache round this weekend. Two Audi cars were entered. The Racing Team Jagu Audi A1 driven by Yvonnick Jagu, and the ex-Jagu Audi A3 of Jimmy Terpereau. 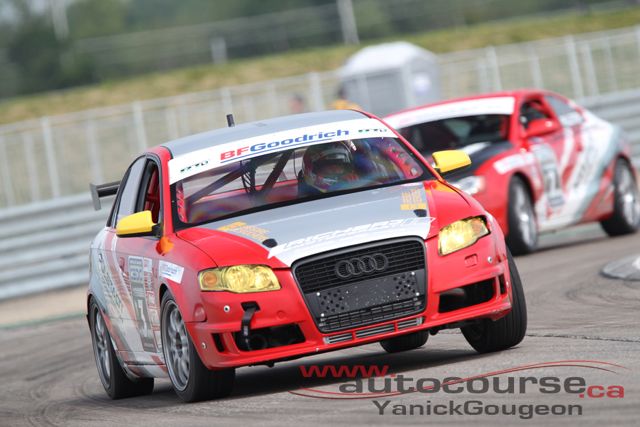 The Canadian Super Production Challenge was at Calabogie Motorsports Park for events six and seven of the season. Three Audis are competing in this championship. The Ingolstadt Competition team fields two cars, an Audi A5 and an ex-Stasis Audi A4 B7 World Challenge Touring Car. The third Audi is a privately entered Mk1 Audi TT.

The Zolder 24 Hours entry list was revealed this week. Belgian Audi Club Team WRT are the two-time reigning Zolder 24 Hours race winners, having taken victory at the event in 2011 and 2012, both times with Audi. The Belgian team will be returning to Zolder for their title defence at the end of August. WRT will entrust their #1 Audi R8 LMS ultra to four Belgian race drivers: Laurens Vanthoor, Anthony Kumpen, Enzo Ide and Bert Longin. Their Audi R8 LMS ultra will also be featuring a creative livery. WRT along with GrafiWrap hosted a design competition which invited fans to submit livery designs for the Audi R8 LMS ultra. The winning livery will be seen on the WRT Audi at the Zolder 24 Hours. This livery is yet to be revealed ahead of the race.

Jan Brunstedt has taken victory, behind the wheel of his #4 Audi R8 LMS, at every Swedish GT event so far this season. He was joined in victory on two occasions by his co-driver, Christer Lindholm, at Mantorp Park and at Anderstorp. The latest results from Anderstorp last weekend have elevated Jan Brunstedt into an unassailable championship lead, as no one is mathematically able to catch up with the remaining points on offer this season. Thus Jan Brunstedt has officially been crowned the 2013 Swedish GT champion, with two rounds still remaining.

Hans-Joachim Stuck made a return to racing this weekend. After retiring a few years ago, he was back in a race car to support his two sons, Johannes and Ferdinand Stuck in the VLN. They were entered in the #15 Phoenix Racing Audi R8 LMS ultra. He unfortunately suffered a heavy crash during qualifying, which prevented them from taking part in the race. Hans-Joachim Stuck has fortunately been reported as unharmed following the crash.

DragonSpeed has already announced that they are intending to compete in the 2014 Pirelli World Challenge. At the beginning of this week they announced a last minute deal which saw them competing in round eight of the 2013 World Challenge season at Sonoma this weekend. DragonSpeed was the first North American to acquire an Audi R8 LMS ultra, and this weekend’s participation at Sonoma also marked the North American track debut for an Audi R8 LMS ultra competing in the country.

Istook Motorsports has announced their intensions to run their Audi TT RS in the Trans-Am series in the near future. If they are allowed to enter the series they are interested in a Trans-Am program alongside their 2014 Pirelli World Challenge program. Two Audi Sport factory drivers were involved in the reveal of the new Audi A8 and Audi S8 ahead of their debut at the Frankfurt Motor Show. The drivers featured Loïc Duval and Edoardo Mortara, who were seen in the preview and final reveal videos.

This Week with Will Buxton Trailer