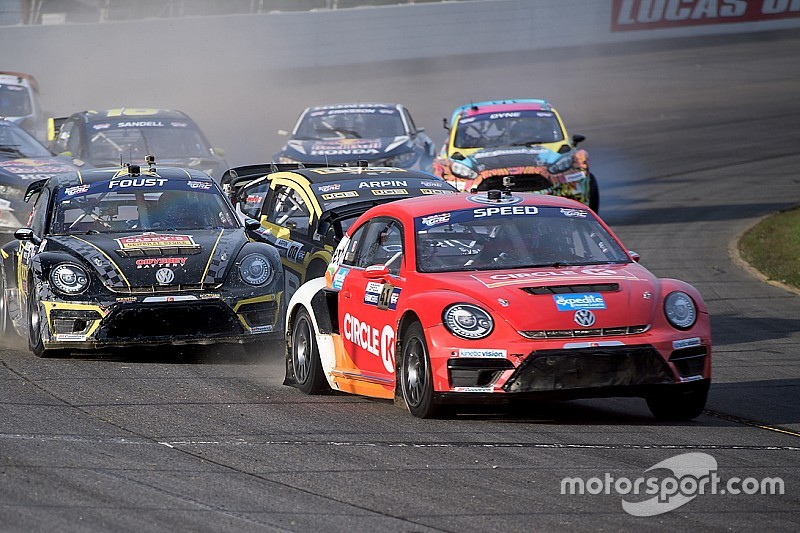 Scott Speed hit the jackpot at Red Bull Global Rallycross Atlantic City after sweeping both of the weekend's Supercar finals. Speed chased down Subaru Rally Team USA's Patrik Sandell to win the Saturday round, and coasted to an unchallenged victory on Sunday as the field fought behind him.

Scott Speed, #41 Volkswagen Andretti Rallycross: “To be honest, that race was plan A! It went the way we hope every race does. The Volkswagen Andretti Rallycross Beetle is on rails and super fast, but to be fair, these guys are catching up and it’s getting tight! I’m really looking forward to a competitive last half of the season. We’re going to have to be on our A game, but fortunately, we got some great points this weekend, and that gives us the points lead. Now we just have to hold on!”

Sebastian Eriksson, #93 Honda Red Bull Olsbergs MSE: “The race started off good—I was up on Scott, but obviously Arpin caught up to me, so I had to protect myself. I kept the inside line and didn’t want him to pass. Unfortunately I lost some pace. We try to go as fast as possible at every race—point wise, I think we lost too many points in the beginning of the season to really fight for the championship, but we’re going to do the best we can and get as many points as we can to finish in the top three.”

Steve Arpin, #00 Loenbro Motorsports: “Hats off to my crew—they worked their tails off. We got taken out of the second heat race there and it ended up being more damage than we thought it would be. It ended up being a little deeper and it took us the third race and the semi-final to figure it out, but that thing came back to life in the final! That JCB car was awesome, and our team is awesome. It doesn’t matter if you start in the third row or the first row, that’s rallycross.”

Scott Speed wins Round 7 in Indianapolis