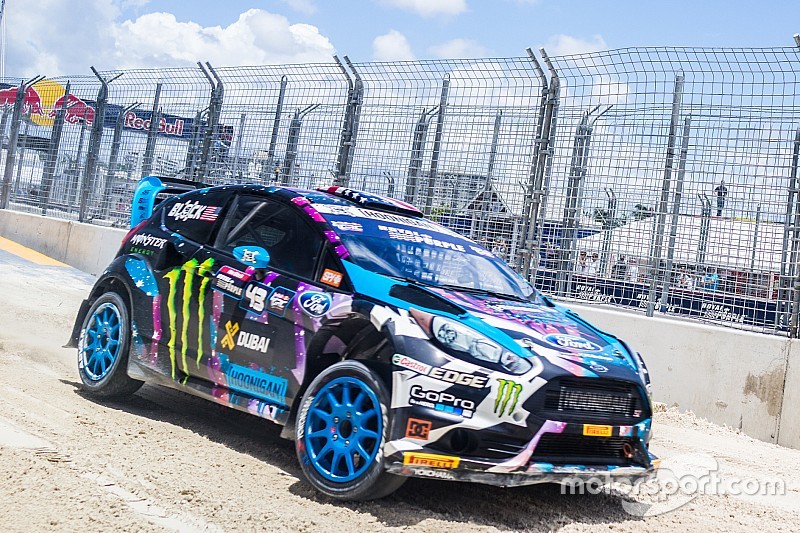 The Red Bull GRC season opened on a new course at the Bahia Mar Resort in Fort Lauderdale, where Ken Block overcame early-weekend mishaps to climb to the front and hold off Scott Speed and Nelson Piquet Jr. for the victory. Between then and now, Speed added a gold medal in Red Bull GRC’s X Games invitational round, beating Steve Arpin and Sebastian Eriksson to the line.

12 Supercars will take to the field once again in Daytona. 11 of the competitors from Fort Lauderdale will return, with newcomer Jeff Ward the 12th driver; Ward will compete in the #360 Ford Fiesta ST for Chip Ganassi Racing.

The Daytona International Speedway course remains nearly unchanged from the 2014 season. The .931-mile course features 11 turns and a dirt jump with a 69% to 31% pavement to dirt ratio.

Ken Block and Scott Speed were two of the fastest drivers on track throughout the 2014 Red Bull GRC season, and so it’s no surprise that they won the year’s first two events. But because Speed’s gold medal win at X Games Austin didn’t count for points, he enters the Daytona doubleheader two points behind Block for the championship lead. They’ll both be contenders for this weekend’s victories.

Joni Wiman’s Red Bull GRC season didn’t start off the way he planned in Fort Lauderdale, when he was unable to gain clearance from the series doctor to compete in Sunday’s events. A week later at X Games Austin, he went off the side of the jump and, though unhurt, damaged the car too badly to advance into the main event. He’ll look to turn things around in Daytona, a track where he qualified first and won two heats last season.

Chip Ganassi Racing’s first Red Bull GRC round saw Steve Arpin win a heat and a semifinal in Fort Lauderdale, only to see its hopes at the win vanish when Arpin flinched before the green light flashed in the final. But he came back strong with a silver medal at X Games, and teammate Brian Deegan showed the team’s strength by challenging for the bronze. Newcomer Jeff Ward, a motocross legend and former IndyCar race winner for the Ganassi group, will join Arpin for this weekend in hopes of giving the team its first overall victory.

Scott Speed, #41 Volkswagen Andretti Rallycross Beetle: “There’s no question that we have to play the weekend smart, but I think that’s kind of GRC in general. I mean, from our perspective, you’ve got to think that every single time that car's rolled out on the track, we've been on pole by over two tenths — the closest margin is probably around two tenths, but normally it’s two or four. So when you’ve got that kind of margin of speed on the field, you’re playing defense. This weekend’s no different. So that’s going to be the game plan. It’s a doubleheader — the mistakes and problems will cost you more, there’s no question. But you also get more time to figure out the track too, which is maybe not in our advantage, because we feel like learning tracks quickly and getting up to speed quickly is one of our biggest strengths, so we’ll see.”

Austin Dyne, #14 Bryan Herta Rallysport Ford Fiesta ST: “It’s just really flowing and has high speed. It’s a higher-speed track, so it has some technical stuff too, but it’s pretty high speed where you have to get on the brakes slowly and you can gain a little bit. And just a lot more room to do passes and kind of seems to run pretty strong on kind of getting up through the field and stuff. So I don’t know — we’ll see how it goes, but I guess it kind of suits me for whatever reason.”

Tanner Foust, #34 Volkswagen Andretti Rallycross Beetle: “I think the track flows a bit better this year. After the jump, it’s a little less of a 90 left in the dirt, and it’s a little bit tighter getting onto the tarmac. But then you don’t have that bottleneck hairpin that we had before, which brought all of the cars together for a moment, but in reality, it spread the cars out because they just drag raced out of that corner down the straightaway. So now, I think there’s the opportunity to get closer on the straightaway and possibly do more passes into the joker and into turn one, which is really what we want.”