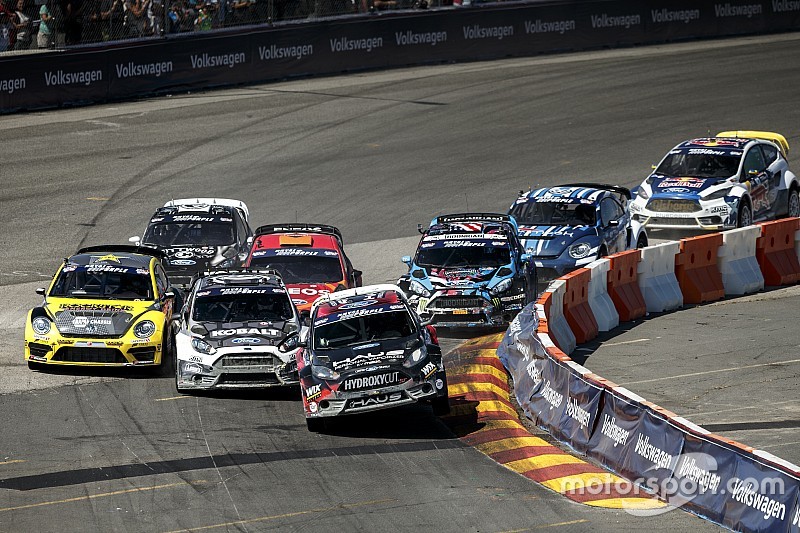 Red Bull GRC returns to Los Angeles with a brand new course layout and one of the largest fields of the season.

This year’s doubleheader at the Port of Los Angeles will go a long way towards determining this year’s Supercar champion, as Ken Block looks to extend his points lead over Sebastian Eriksson.

Nelson Piquet Jr. finally took his first overall Red Bull GRC victory for SH Rallycross in Washington DC, holding off Patrik Sandell for the win a year after Sandell beat Piquet to the finish line at RFK Stadium the year before. Piquet used the victory to climb up to third in Supercar points, while Ken Block’s third place result extended his points lead.

The crossover jump returns to Red Bull GRC competition for the first time since 2012, helping to extend this year’s course layout to 13 turns and .702 miles. The jump, which will be constructed with dirt, will feature a bridge element. Click here for more information on the track.

Subaru Rally Team USA’s four-car assault on the Red Bull GRC field will undoubtedly prove popular with fans, especially with the addition of David Higgins and Travis Pastrana to its lineup. But Subaru plans to keep fans engaged away from the track as well: a record 13 heritage vehicles from its stable, including vehicles with ties to the legendary Richard Burns and Colin McRae, will be on site this weekend.

Manufacturer’s title on the line

Ford has the opportunity to clinch its fifth consecutive Red Bull GRC Supercar manufacturer’s championship in Los Angeles with the right combination of finishes. If Ford drivers win both of this weekend’s races, scoring all 10 possible manufacturer’s points, the title will be mathematically clinched heading into Barbados; the brand can also clinch the title outright by tallying eight or nine points and by outscoring Volkswagen, or clinch a share of the title by earning seven points.

Travis Pastrana, #199 Subaru Rally Team USA WRX STI: “My schedule is so busy that I don't have a chance to race as many of the GRC races as I would like to, and having a double header gives me more time to get up to speed and put in my best result. I have a lot of family and friends that live close to the area and this year is specifically important because STI and Subaru are presenting! Subaru had our most productive test that I've ever been a part of last month and I'm really excited to see how the new direction will help us in LA.”

David Higgins, #75 Subaru Rally Team USA WRX STI: “I can't wait to race, it's going to be great with all four Subaru team cars there. Having a double header is great for me as it gives me plenty of side by side race action. It's very important for the team and myself to pull a result off, the team works so hard. I am confident with my team and my ability and can guarantee one thing: there will be no stone unturned in my quest to go home with more than I came with.”

Patrik Sandell, #18 Bryan Herta Rallysport Ford Fiesta ST: “The course looks very narrow, twisted, technical, and with kind of a lot of dirt. So it looks like they’ve kind of put together a dream track for me. It looks like a track that will fit me, and I feel like I’ll be able to go out there, get very comfortable, and be able to do well straight away. I’m really looking forward to getting out there on this track.”