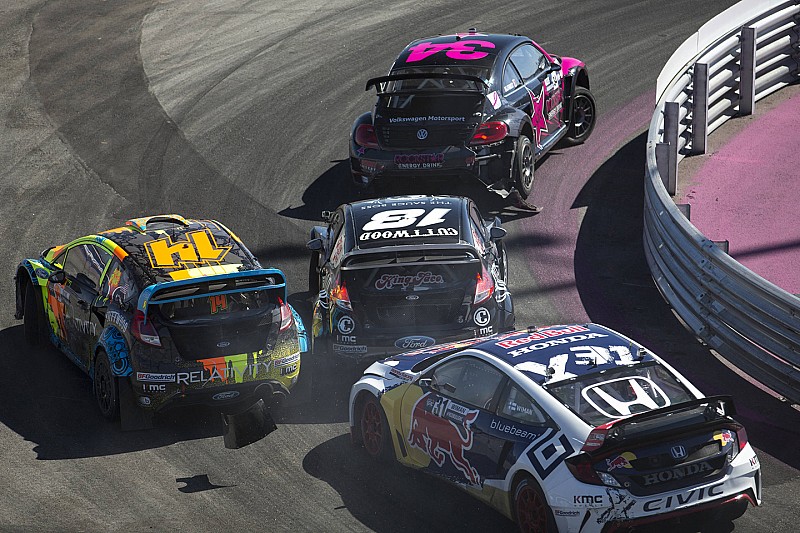 The second half of the season kicks off in Indianapolis with a number of entries boasting local ties.

The second half of the season kicks off in Indianapolis with a number of entries boasting local ties. Foust and teammate Scott Speed fly the Supercar flag for Volkswagen Andretti Rallycross, with both drivers looking to return to the top step; meanwhile, Bryan Herta Rallysport and Rahal Letterman Lanigan Racing will both look to bring trophies home to their local race shops with drivers Cabot Bigham and Austin Dyne, respectively.

Tanner Foust (#34 Volkswagen Beetle GRC): “True to rallycross form, we’re bringing the racing to a whole new group of fans with the new tour stop in Indianapolis. It’s a town very familiar with racing, but it will be the first time fans in Indy will see rallycross live. I always love when racing fans see rallycross for the first time, because they’re always so shocked at the excitement and speed of the cars. This event has a bit of a different vibe though, since it’s the home of Volkswagen Andretti Rallycross. Our teams of mechanics and engineers will have family and friends present, so I’ll get to see the kids and families we’ve heard a lot about and signed autographs for over the past few years.”

Scott Speed (#41 Volkswagen Beetle GRC): "Indy is the home of Volkswagen Andretti Rallycross, with a lot of family and friends here to support us. I’m excited to bring GRC to Indy and show the 'Racing Capital of the World' what our sport has to offer. I know we will be fast and have a great shot for the win!”

Chris Atkinson (#55 Subaru WRX STI): "We are really looking forward to the next race in Indy. The track looks quite different and very specific. The team and driver that can adapt the quickest will be in a good position. I can’t thank my guys enough on the #55 car for the work they have put in since the crash in Ottawa. After having a brief drive last week, it feels even better than before!"

Patrik Sandell (#18 Subaru WRX STI): "The second half of the season is here and I have been looking forward to this race since Ottawa. We showed good speed up there and now it's time to put it all together. The track looks to be fast and we will definitely fight hard for good finishes for both cars.

It's really exciting that they are finally bringing GRC to a unique motorsports city like Indianapolis. It's a special event for us as the Subaru factory is based just outside the city so we are hoping to see many Subaru loving fans there."

Austin Dyne (#14 M-Sport Fiesta): “It's pretty cool to be racing in Indy. I have never raced here before except in a charity karting race. I've been coming here as a little kid to watch the Indy 500 and back when F1 came here.”

The full entry lists for the Supercar and GRC Lites classes at Red Bull GRC Indianapolis are as follows:

Speed and Bigham win first round of GRC Indianapolis heats