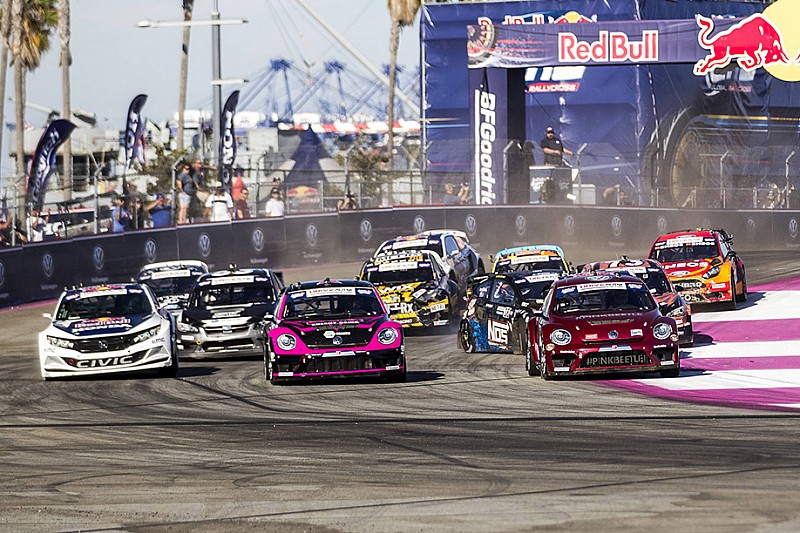 With four different race winners in four rounds so far, the 2017 Red Bull Global Rallycross Supercar season is shaping up to be one of the most intriguing in recent memory. This weekend at the Canada Aviation and Space Museum, GRC's fans" get to see if that streak will continue—or if the series’ first-ever visit to Ottawa will also produce the season’s first repeat winner.

Fort Frances, Ontario native Steve Arpin headlines the Supercar entry list, not only as the hometown favorite, but also as the most recent winner: the Canadian led the final few laps in the second New England final to take his second career victory.

The points-leading Volkswagen Andretti Rallycross duo of Scott Speed and Tanner Foust, as well as a number of drivers who have competed in Canada in other events—including Patrik Sandell, the Grand Prix de Trois-Rivieres Lites champion in 2014—will join him on the grid.

The full entry list for the Supercar class at Red Bull GRC Ottawa is as follows:

Scott Speed - No. 41 Orafol Beetle GRC: “With a 19-point lead, we need to play it smart and continue collecting as many points as we can this weekend in Ottawa. We did an amazing job in New England battling back from issues in qualifying, grabbing crucial points all weekend. We need to keep that same poise this weekend heading to Canada.”

Tanner Foust - No. 34 Rockstar Energy Drink Beetle GRC: “Having raced before in Canada for both European and World Rallycross, I can say that the Canadian fans are absolutely world-class. I’m expecting a strong turnout of fans and a lot of enthusiasm in the paddock. It's about time we get up there to visit our neighbors to the north in GRC, and I'm stoked for Ottawa’s doubleheader this weekend!”

Chris Atkinson - No.55 Subaru WRX STI: "Obviously we were extremely happy with our result in Thompson. It was great to get the first podium for the team in 2017 and shows we are starting to unleash the potential of the Subaru WRX STI. We still need to keep working hard and to improve for the next event in Canada and I hope we can keep the momentum going. Also I am excited to be racing in Canada for the first time and look forward to putting on a good show for the fans!"

Patrik Sandell - No.18 Subaru WRX STI: "I'm super excited to get back in the car in Canada this weekend especially after very positive results with top times in qualifying and good results for both Atko and myself in the final at the last race in New England. We now have shown the world that SRTUSA is back in business for real. I'm glad that we are going to Canada to race. They have big stage rally followings up there and that means there are a lot of Subaru fans. I can promise that Canadian fans will witness a great show from both Atko and I this weekend."

Austin Dyne - No.14 M-Sport Fiesta: “It's pretty cool to finally be racing in Canada with GRC. I've been to many races in Canada and the fans are awesome. The track layout looks fun and they are always good at airports it seems for us.”