GRC Round 3: Saturday's report from Race 1 in New England 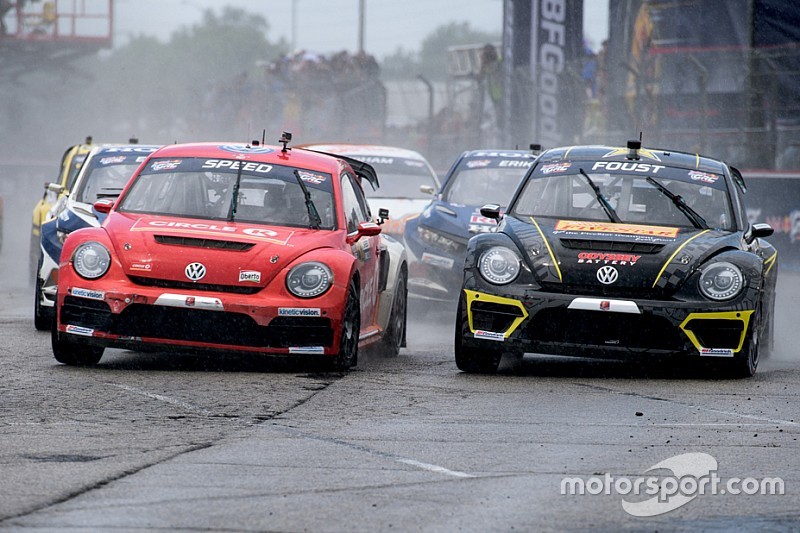 Tanner Foust (No. 34 Rockstar Energy Drink Beetle GRC): “I definitely made some mistakes today, but on paper it did look pretty smooth. Like Scott [Speed] said, these cars really take a beating on this track. Hats off to the [Volkswagen Andretti Rallycross] VARX team really putting everything together. Every heat, we’re fighting for it, all of these guys are. When you cruise through the pits and see the mechanics thrashing at it, even though it doesn’t seem like that much didn’t happen on track, there’s just a lot going on. It really is a very cool track, it’s a cool piece of American history, to come here on the oldest paved oval in the country. In 1940, they started racing here. Many of us haven’t been here before, rallycross has raced in New England but it’s taken a bit of a break, so it’s great to see a lot of familiar faces. To bring a totally different sport to this historic venue, it’s great. You use multiple parts of the track, use the lawn up the hill, the whole deal. We’re using every drop we could possibly get out of this venue. It’s been a great day, so hopefully we’ll put on a great show for tomorrow!”

Scott Speed (No. 41 Orafol Beetle GRC): “It was an exciting day. We had a lot of action on the track all day, battling in pretty much every single race we were in, which is great experience for tomorrow. I now know how the track races. It’s going to be great info. A big shoutout to our team, going 1-2 again. The track is awesome. It’s a bit of a minefield out there, and these cars have taken a beating. It’s really amazing that all of these cars finished the race, but it’s a testament to all of the teams and how much they’ve done to these rallycross cars. Ours managed to stay together and made it a great show.”