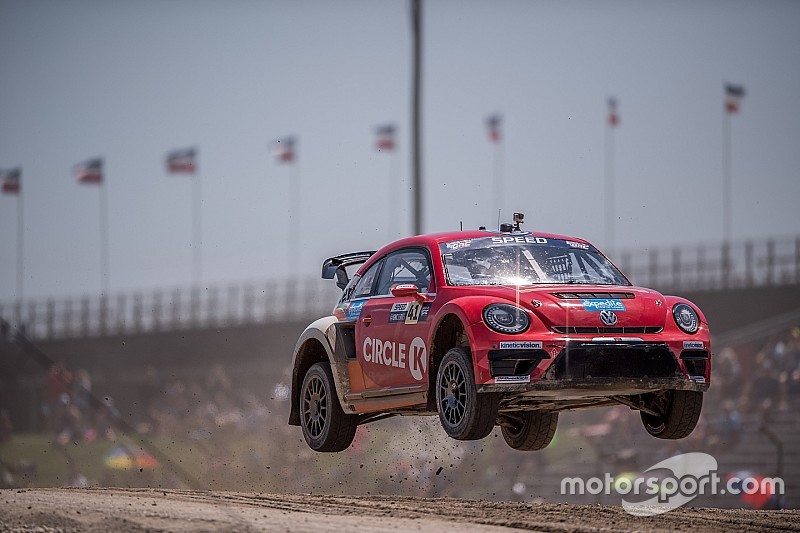 Subaru’s Patrik Sandell was third in the race, while Steve Arpin claimed bronze in the championship.

The VW duo arrived at the shortened 0.654-mile (it was 0.699-mi last year) Los Angeles venue just 30 points apart after 11 prior races, with Speed knowing he simply needed to start the final - if he swept his heats and semi-final. For the first time in the series’ four trips to LA’s waterfront, this would be a single, rather than a double-header race.

Foust, on the other hand needed to accumulate the maximum number of points available, 81, to stop teammate Speed. Arpin, a long-shot for the crown, was mathematically eliminated when Speed tabled another eight points ahead of him.

Speed, whose teammate won the final two races of the year heading into the finale, realized that Foust could end his bid for a third crown. He'd spent the week “just thinking about all the what-ifs and all the problems that could happen, even going in with such a big lead” – but was soon climbing a trackside fence to celebrate his achievement.

In the final 10-lap sprint on Saturday afternoon, Foust took the lead, with Patrik Sandell in his Vermont Sports Cars’ Subaru and Cabot Bigham, driving a Ford for Bryan Herta Autosport, both passing second-placed Speed to push the champion-in-waiting back to fourth.

Speed would get past Bigham initially and take Sandell with just a couple of laps remaining, earning the title with a reduced margin of 19 points.

“We snuck qualifying away from Scott and then there was a little glimmer of hope in the heats,” Foust said after sealing the win.” Had Speed finished worse than eighth in the 10-car field, it might have been Foust’s day.