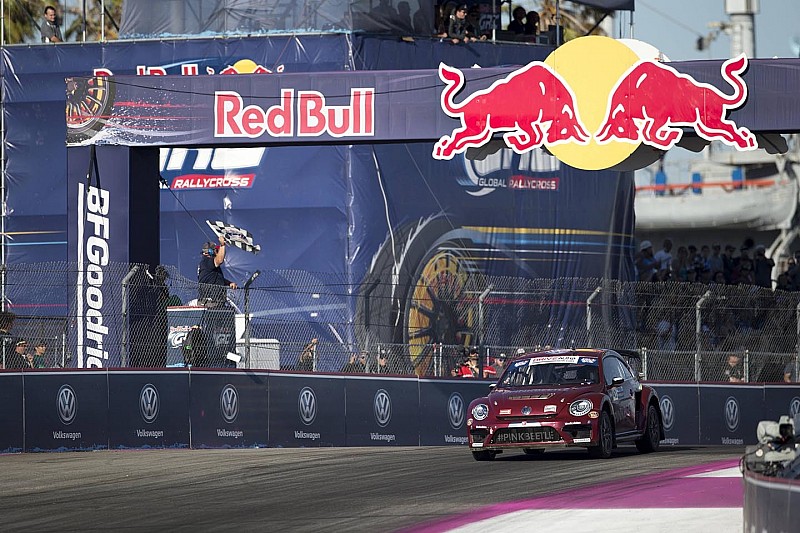 Speed held off teammate Tanner Foust for the win to create a winner-take-all battle heading into today’s season finale.

Scott Speed’s winning streak at the Port of Los Angeles remains alive after a thrilling victory in Saturday’s Red Bull Global Rallycross Los Angeles presented by Honda. Speed held off teammate Tanner Foust for the win, his fourth of the season, to create a winner-take-all battle heading into Sunday’s season finale.

“When we don’t have mechanicals or incidents, we qualify first or second, and we stay there,” Speed said of Saturday’s victory. “Yesterday and today, we had a clean day with our car. It ran at 100% the whole time, and when it does that it’s typically the fastest car out there. Today, that was very evident, and tomorrow will be exciting, no question!”

Speed and Foust pulled ahead early in the main event, while an intense battle for third place saw Steve Arpin find a way around Brian Deegan and David Higgins early in the race and hold the position[1] . The 12-car, 12-lap Supercar main event saw numerous passes and wheel-to-wheel battles on the shortest course of the season, but it was Foust whose Joker Lap strategy kept the race down to the wire. Saving his shortcut to the final lap, Foust spent most of the race trying to make up time on his Volkswagen Andretti Rallycross teammate, but couldn’t quite finish the job.

In GRC Lites, Alex Keyes proved to be the perfect last-minute substitute driver for Dreyer & Reinbold Racing, which promoted his season-long seat-mate Tanner Whitten to a Supercar for the weekend. As he did in his previous race in Atlantic City, Keyes swept the round from qualifying to the main event, holding off championship contenders Miki Weckstrom and Cabot Bigham for the victory.

Both the Supercar and Lites champions will be decided in Sunday’s action. Foust retains his points lead over Speed in Supercar, 523-517; they are the only two drivers still in contention, guaranteeing Volkswagen Andretti Rallycross its second straight driver’s championship. In Lites, the three remaining eligible drivers are separated by only seven points, as 2015’s reigning champion Oliver Eriksson retains his current championship lead over Weckstrom in second and Bigham in third.

Speed and Deegan win GRC in Port of LA