Speed and Deegan win GRC in Port of LA 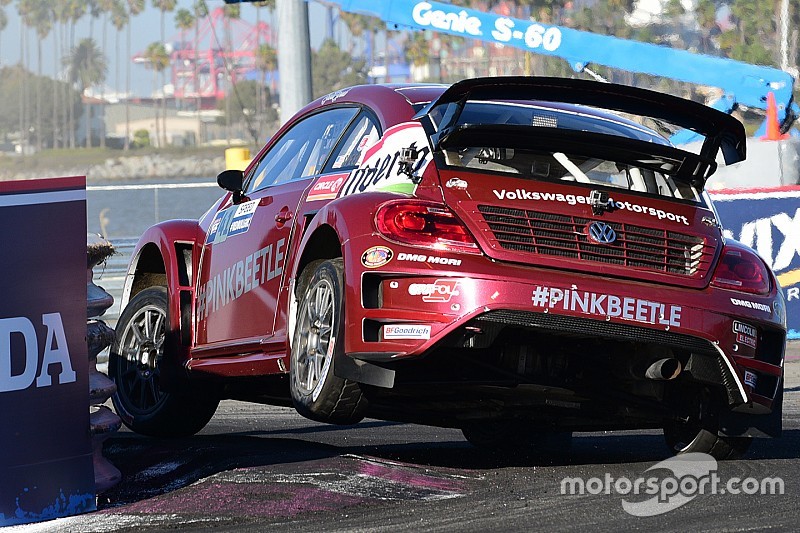 Volkswagen Andretti's reigning GRC champion Scott Speed scored a first and a second in the Port of Los Angeles at the weekend to retain his crown, while on Sunday, Brian Deegan scooped his first race victory for Chip Ganassi Racing.

With the Port of Los Angeles as a scenic backdrop, Chamber of Commerce weather throughout the weekend and a raucous crowd on-hand to celebrate the 11th and 12th races that culminated this year’s Red Bull Global Rallycross season, it was appropriate for this series to crown both new and familiar winners.

There were two Port of Los Angeles RBGRC Supercar races presented by Honda held in this meeting: one on Saturday, won by reigning champion Scott Speed for Volkswagen Andretti Rallycross and the series’ final contest of the year, which went to Chip Ganassi Racing's Brian Deegan, who hadn't won since 2011.

During one of the preview races on the 0.699-mile track on Saturday, the catalytic converter on Toshi Arai’s Subaru WRX came loose, causing an exhaust fire that eventually felled a fuel line and set the entire cabin in flames. The Vermont Sportswear Subaru Rally Team USA worked through much of the night to repair the car, finally getting the engine running around 1.30am Sunday morning.

They weren’t the only ones burning midnight oil as Patrik Sandell’s Bryan Herta Rallysport Ford Fiesta ST squad, disappointed with a fifth place result on Saturday didn’t leave the track until 3am. Asked what they changed, the answer was “everything.”

The Saturday race went to Speed, with teammate - and then points leader - Tanner Foust second and Steve Arpin in third place. Deegan, Sandell, David Higgins (Subaru), Chris Atkinson (Subaru), the Honda Civics of Mitchell DeJong and Sebastian Eriksson, and Tanner Whitten, in the SH Rallycross/DRR Ford Fiesta ST in tenth. At the close of the first 12-lap race, Speed trailed Foust by a scant six points.

The show began early on Sunday as practice lit at 7:30am, just after sunrise. Then came qualifying, heats, semifinals and last chance qualifiers. In the midst of the heats and semifinal, Speed cut Foust’s lead to four points when he won the semi; Foust needed to make the finals in the last chance qualifier.

In the Feature race, Sandell grabbed the lead from the start, pushing Speed back to second place and after plenty of bumping and banging in the first few laps, especially in the busy third turn, the race settled in the order of Sandell, Speed, Deegan and Foust.

Then with two laps to go, Speed grabbed the lead from Sandell, but he was denied victory when Deegan used a monster trip through the Honda Joker Lap to steal P1 and held on to win. It was his first victory for five years.

However, Speed’s runner-up finish was enough to earn him his second consecutive GRC title, while Sandell completed the podium. Foust was fourth, former champ Joni Wiman took fifth for Honda, followed by Whitten, Atkinson, Austin Dyne - who ran most of the event with his unlatched hood hugging his windshield – followed by Higgins and Arpin.

On the podium Speed seemed as excited by Deegan’s victory as he was by his own second consecutive championship ,and the Volkswagen Andretti driver blurted out, “Today was the most emotional day of racing in my entire career.

“Lucky for us, Tanner ended up falling back and it gave us some breathing room. I was able to get by Sandell. Everyone raced clean today and I was able to win it.”

Deegan was equally excited, throwing off his firesuit top, before declaring: “We needed to make it happen the last race, because the team has done such a good job all year. We just kept missing a little bit and it was eating at me. We really just had to get it done.”