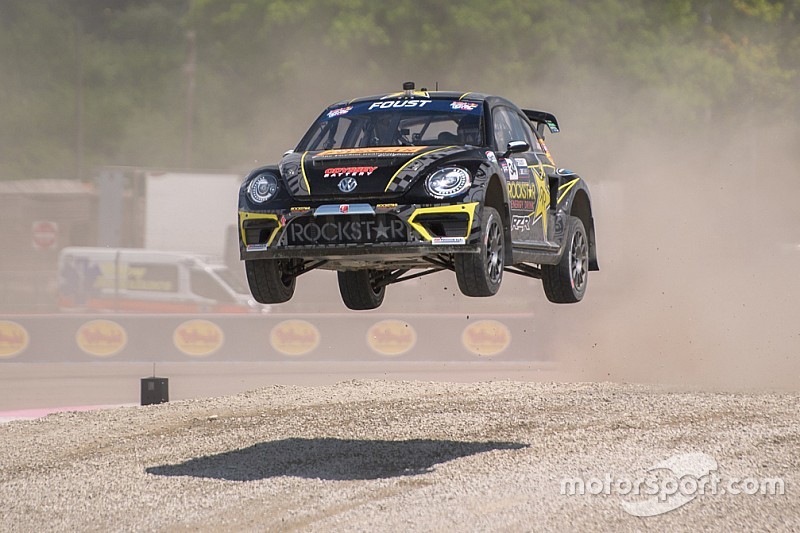 It wasn’t as smooth of a path as Saturday’s clean sweep, but Tanner Foust remained undefeated in Red Bull Global Rallycross events at Evergreen Speedway with a Supercar final victory on Sunday. Foust bested his Volkswagen Andretti Rallycross teammate Scott Speed, who had been perfect heading into the main event, with Subaru Rally Team USA’s Patrik Sandell finishing third.

“It’s true—Scott could have swept the title this weekend,” said Foust. “We held him off from that, but more importantly we held off Steve Arpin from gaining points. Finishing 1-2 twice puts Volkswagen Andretti Rallycross in the championship 1-2 with Scott leading. It was just an amazing effort from all the guys, and I’m so happy for the whole team.”

Much like Foust on Saturday, Speed was perfect in his heats and semifinals to take the top spot heading into the main event. But a terrific start from Foust, the four-time Fan Favorite Driver of the Year, enabled him to grab a lead that he would never relinquish. Behind them, Sunday polesitter Sandell would take his second podium in the past four races, while Supercar newcomer Austin Cindric and Saturday polesitter Chris Atkinson would complete the top five.

Tanner Foust, #34 Volkswagen Andretti Rallycross: “It’s true—Scott could have swept the title this weekend. We held him off from that, but more importantly we held off (Steve) Arpin from gaining points. Finishing 1-2 twice, that puts us in the championship 1-2 with Scott leading. It was just an amazing effort from all the guys—Kyle, Brett, Pricey, Graham, Boomer—everybody put in everything. Especially with Atlantic City, this is sort of payback for them because they rebuilt the car so many times there. Here, it stayed virtually clean the whole time—I’m happy and can’t tell you what a relief it is. So happy for the whole team.”

Scott Speed, #41 Volkswagen Andretti Rallycross: “We came out of here with loads of points and plenty of gap for the last race of the year. The cars are clean, they’re not broken, and it’s exactly what we wanted to come out of here and do. We just need to keep the wheels on it for a couple of heat races. Going in with 30 points ahead is massive.”

Patrik Sandell, #18 Subaru Rally Team USA: “Back up on the podium baby! We had an awesome start here at the second event—we were first in qualifying and second in the first heat. Thanks for all the amazing support from Subaru and all the awesome Subaru fans and ambassadors around the world. I’m so grateful!”

The 2017 Red Bull Global Rallycross championship will conclude on October 13-14 with th championship final in Los Angeles. Once again, the season will come down to the final race with the champion to be determined.