LOS ANGELES, Calif. (Aug. 5, 2013) - Back-to-back medals in Los Angeles this weekend cemented Tanner Foust's status as the driver with the most rally car medals in X Games history. He has stood on every step of the podium in X Games competition this year. 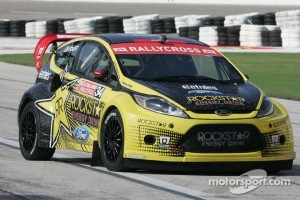 "It has been an amazing run at X Games," said Foust. "To earn three medals in four international races with the Rockstar Energy Drink Ford Fiesta ST is something the whole team should be proud of."

Gold in Gymkhana GRID competition Saturday and silver in X Games Rallycross a day later brings the driver's medal tally to nine. He is the most consistent rally car medalist at X Games and one of only two to take part in every X Games race since four-wheel motorsport debuted at the high-profile action sport event in 2006.

"It's great to battle back to the podium after such a tough qualifying session," said Foust. "Earning a medal at X Games is like no other podium finish and it is awesome to do it here at home with such enthusiastic fans."

After a flat tire in qualifying put him in a mid-pack 10th on the leaderboard at the start of the day, Foust battled door-to-door in the most exciting heat race of the contest to get ahead of European Rallycross Championship leader Timur Timerzyanov and advance directly to the main event.

The packed hometown crowd went wild. The driver calls Southern California home and has competed in front of more than a dozen sell-out crowds at Irwindale during his career. "The fans here are always awesome," said Foust. "There's such high energy and they're so loud they really shake the place."

In the Final, Foust was able to stay out of trouble as rival drivers clashed heading into a tricky hairpin turn. He gave chase to Ford teammate Toomas "Topi" Heikkinen and crossed the line in second to earn his ninth career X Games medal.

A day earlier, an impressive show of speed and car control won Foust his first medal of the weekend -- gold -- in the debut X Games Gymkhana GRID contest. "Gymkhana GRID was chill; it was like a bunch of friends having fun with cars," said Foust. "Sure, we were competing, but there wasn't the championship stress."

Foust was unbeatable as he battled through an elimination ladder Saturday evening on mirrored courses inspired by Ken Block's series of online Gymkhana videos.

Enthusiastic fans roared as drivers in the eight-car field raced head-to-head against the clock while executing a series of technical features including a 540 drift through a tight shipping container, a figure eight and a tire-smoking 720 spin around a barrel. Foust also won the first Ken Block Invitational Gymkhana GRID event at Irwindale in 2010.

Rallycross is a blend of circuit racing, off-road racing and rally competition. As many as 10 drivers line up to start at once, piloting high-horsepower compact cars through race traffic over a challenging short course that features jumps, unbanked turns, hills and transitions between pavement and gravel.

X Games Los Angeles was the final stop in an international action sports tour that also included events in Foz do Iguacu, Brazil, and Munich. Next weekend, Foust will compete in the seventh round of the Global Rallycross Championship at Atlanta Motor Speedway.