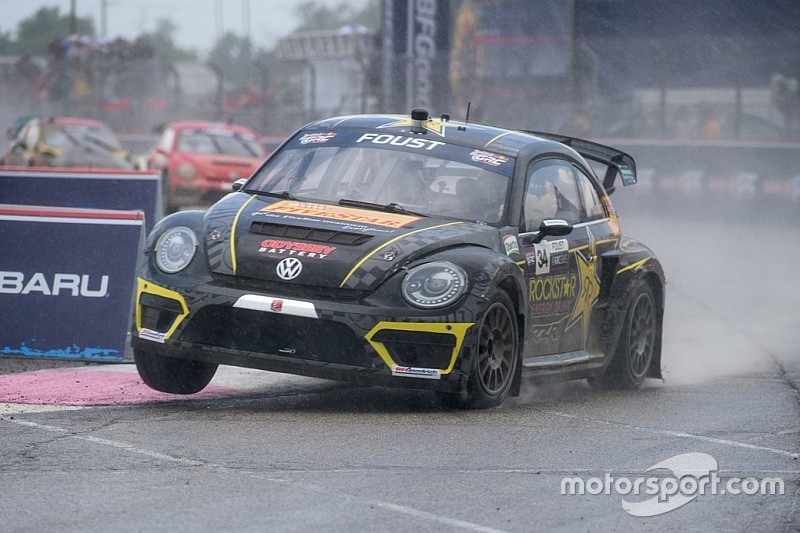 Manufacturer championship within sights, four points back from first

The tables turned on Sunday, as Speed bounced back with the Big Rig Brewery Pole Award and wins in each of his heats and semifinals. Despite some initial struggles, including a spin in his second-round heat, teammate Foust also won his semifinal to set up a Volkswagen Andretti Rallycross showdown at the front of the pack.

The initial start was called off after Chris Atkinson rolled his Subaru WRX STI; not only was he uninjured, he also pulled back onto the grid and completed the full final after the restart. Foust and deJong would each beat Speed into the first few corners, while an early DNF would ensure that Arpin couldn’t sweep his home race. As Foust extended an insurmountable lead, Speed continued to pressure deJong until the final straightaway, where he pulled past the rookie to take second place and make it a 1-2 finish for VARX.

Tanner Foust - No. 34 Rockstar Energy Drink Beetle GRC: “What a finish! It’s been an extremely long weekend. I think we made a lot of rallycross fans up here in Canada, and that’s what it’s all about, showing this sport to new places. It’s an amazing sport that you can carry to all of these different tracks. This track was pretty tough, and I have to thank BFGoodrich for making some tough tires. The fact that they’re staying on these wheels through all of this stuff was pretty unbelievable. I’m incredibly happy and it’s great vindication for Volkswagen Andretti Rallycross, for us to get a 1-2 finish after such a long weekend. It’s really spectacular.”

Scott Speed - No. 41 Orafol Beetle GRC: “Obviously, we had a lot more work to do on the restart of the race. It was a fun race. It maybe wasn’t quite as impressive out here, but in the car, if you could see the lack of what I could see, it was actually a great race. By the end of the race, we pretty much had zero visibility out the window, and I was trying to put as much pressure as I could on second. Unfortunately, I made a mistake on the last corner, but we were able to somehow sneak by to grab second. Shoutout to the Volkswagen Andretti Rallycross team. We crushed it again this weekend with a 1-2 finish, so I have to give it up to these guys. And thank you to all of these fans for coming out in Canada!”

Mitchell deJong - No. 24 Red Bull Honda OMSE Civic: on Sunday’s performance in the Finals and this weekend’s double-podium result: “We had a good start and I had Scott [Speed] behind me, and I knew he was going to be fast. I was trying to not make mistakes and run clean because it’s very hard to pass on this track. I wanted to maintain clean lines throughout the course to hold him off, but he got me in the last corner like at Thompson [in the Red Bull GRC New England, two weeks ago]. I’m a bit disappointed in that, but I did my best and I can’t thank the whole team enough for its efforts this weekend, along with Honda and Red Bull.”

Sebastian Eriksson - No. 93 Honda Red Bull OMSE Civic: “Personally, I didn’t have my best doubleheader weekend performance, but I think this result [Sunday’s Final] shows that we can be consistent as a team and have the pace to fight for more wins. The team did an amazing job all weekend-long, allowing us to compete in almost every heat for consistent results, no matter the condition of the car.”

Oliver Eriksson - No. 16 Honda Red Bull OMSE Civic: “Finishing the Final without any major issues felt good. This season, my races in the Finals have ended with issues or contact, so to go out, grab a top-five finish and for us to finish third, fourth and fifth, I think, is another stepping stone to bigger and better results in the future. The team has worked incredibly long hours to find pace and it’s paying off, race by race.”