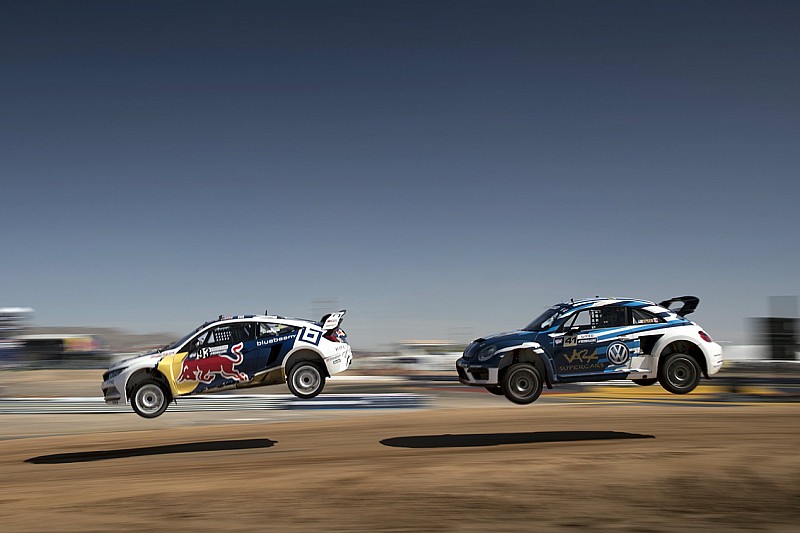 “I like the track!” Foust said after capturing his record-setting eighth Supercar victory. “It’s a real Jekyll and Hyde kind of a track. You’ve got the road course, where you need to be real buttery smooth, and you’ve got that chaotic gravel when you are coming over the jump with tire stacks at 80 miles per hour. So there is a lot of the fun factor and technical spots!”

VARX dominated the preliminary rounds, with Foust and Scott Speed winning two heats apiece. From there, Foust won the first semifinal over the brand new Honda Red Bull Olsbergs MSE entry of Joni Wiman, while Speed held off Sandell to win the second semifinal. In the main event, Foust led from flag to flag, withstanding early challenges from Sandell and Speed to establish a comfortable lead. A late-race issue ended Speed’s podium hopes, dropping him from second to fifth.

New manufacturer Honda put both of its Civic Coupes in the main event, with Joni Wiman finishing second in his semifinal and Sebastian Eriksson placing second in the last chance qualifier. Wiman, now in his third year with Olsbergs MSE, earned a sixth-place result in the event.

In GRC Lites, Miki Weckstrom of Olsbergs MSE X Forces took the victory in his first-ever start in the series, holding off DirtFish Motorsports’ Conner Martell and AF Racing’s Christian Brooks, who made a last-lap pass of Alex Keyes. All three claimed their first-ever Lites podium in the event.

Red Bull Global Rallycross Phoenix (I) results are as follows:

Red Bull Global Rallycross Phoenix competition will continue with the second round of the 2016 season for both classes on Sunday.