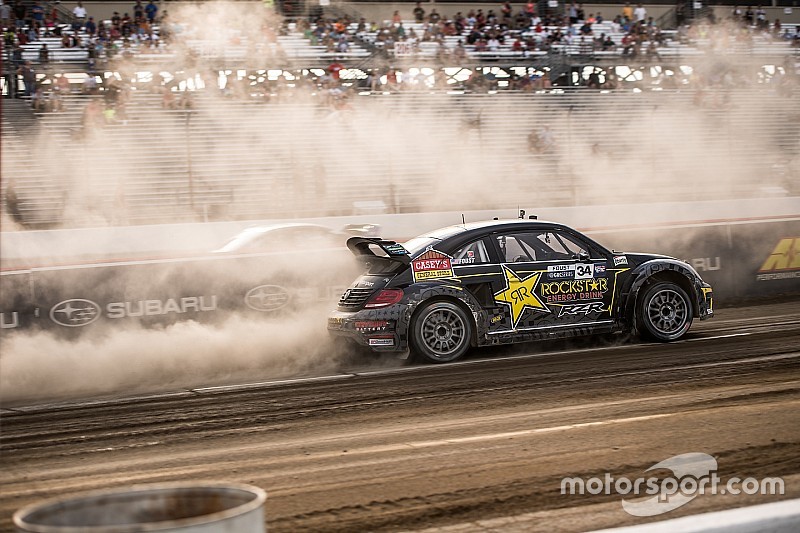 For the second year in a row, Tanner Foust won a Red Bull Global Rallycross event at Evergreen Speedway

Volkswagen Andretti Rallycross driver Tanner Foust won a Red Bull Global Rallycross event at Evergreen Speedway for the second year in a row, posting a perfect point score at Red Bull GRC Seattle I. Foust, who won professional drifting events at the track before switching to rallycross, held off hard-charging teammate and Supercar points leader Scott Speed for the victory, climbing to second in the championship in the process with only two races to go.

“I’m not sure how many years it’s been—I think it’s been 11 years that I’ve been racing here,” Foust said from the podium. “Some of the best racing we have is here (at Evergreen), so we appreciate you coming out here year after year. We’ll have great racing tomorrow, so hopefully we’ll see you guys then too!”

Save for qualifying second to Chris Atkinson, Foust was untouchable for a majority of the event. He won Friday night’s first-round heat, held Speed off in the second round, took an easy victory in the third, and won his semifinal. At the start of the final, he beat both Speed and Atkinson in a drag race off the line and extended a comfortable gap. Speed closed the gap in the final laps, but was unable to make the pass for the win.