The two-hour and 45-minute race resulted the No. 4 car finishing 5th and the a 10th place result for the No. 3 car.

Lakeville, CT - As the season finale of the GRAND-AM Championship Weekend at at Lime Rock Park presented by BMW, the entire 8Star Motorsports team aspired to conclude their debut season in the Daytona Prototype (DP) category with solid finishes for its Nos. 3 and 4 Chevrolet Corvette DPs.

8Star Motorsports shined quickly within the series and in the paddock to be a contender in the Tudor United SportsCar Championship season for 2014. Since everything was brand-new to develop and monitor the crew, drivers and cars had reasonable expectations for its debut season. 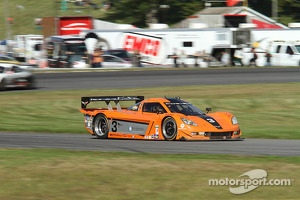 This year was a learning curve for all involved to measure the capabilities of the drivers and team. The 8Star team is gelled in camaraderie with a spirit of international competition. A clearly defined presence of team branding and opportunities within Venezuela as well as a lineup of star drivers within 11 short weeks last winter 8Star soared to build their team in the Championship office in Pompano Beach, Fla.

Driving his passion for racing, Enzo Potolicchio, driver and team principal, announced his dream to launch the new 8Star brand an international team with presence in two additional racing series, FIA World Endurance Championship and the the American Le Mans Series. Potolicchio developed the team for eyes on the bright orange Chevrolet Corvette DP’s as 8Star grooved their own track in 2013 to be a part of #TheFuture.

During Friday’s practice at the final round for the Rolex Series at the 1.5 mile, 7-turn road circuit notoriously known for its challenging passing zones and short track, the team finished P1 and P2 in the second and final session of the day.

“We had a good day for 8Star,” Sarrazin said. “The team has done a great job in setup and to find the best balance. We will go for a good position. The track is very narrow for the grip with traffic on a short track.”

On race day the team energy was very high in the morning as the fog lifted from the nostalgic hills surrounding Lime Rock Park, the qualifying session resulted in two black flags and a broken crazy session for passing after the restarts and 8Star finished qualifying in P9 for car No. 3 and P12 for car No. 4.

Fans came out in full fold for the autograph session in the fan zone and the pit walk and the temperatures began to warm in the mid-70’s for a beautiful fall Connecticut day for racing with 33 cars on the overall track and 14 DP’s. The two-hour and 45-minute race resulted the No. 4 car finishing 5th and the a 10th place result for the No. 3 car. The No.3 car ended the season 7th in the DP points standings with a total of 281 points.

Enzo Potolicchio: “Traffic at Lime Rock was really crazy, very hard to pass. You had to be very aggressive. My favorite corner was in turn one, I was good on the brakes. I was tapped and everyone spun in front of me; there was dust everywhere. I had to choose the line, is it here or there and just found it and kept going and was fine.”

Michael Valiante: “We made good progress for next year. Unfortunately Lime Rock was a tough race. We are developing a new gearbox. We had the pace to be on the podium and just lost too much time in the two pit stops. Once things are sorted out with the car, we will back on the podium like Watkins Glen.”

Sebastien Bourdais: “We knew it was a two-stopper from the get-go. The car was fast and we were as fast as anyone else. When you start from the back you have to just pass a lot of cars. Traffic was bad. Lime Rock is a very short racetrack; it is not easy. I kept telling myself, ‘Stay calm, and be patient, don’t hit anyone, and don’t get hit and we will just see what the end result will be.’”

Gary Neal team manager explained: “For the No. 3 car, it was a pretty tough ending for the season. The race at Lime Rock did not go as planned. We had some issues in the pits with the new gearbox and this cost us some extra time. We had a slow pit stop and we missed the red at the end of pit lane and received a drive-through because we blasted through the red flag. We know what we need to fix for next year.”

8Star Motorsports’ inaugural season came without any baseline data, making the challenge that more difficult. The team is making steady progress as the results are fielding interest within the paddock. 8Star has made its mark as a professional International racing team in 2013 8Star thanks it’s partners in racing Venezuela, Motorola Mobility, Duncan, ONA, BM, its drivers, crew and fans for their dedication and support of our debut season.