Christian Fittipaldi: "That wasn’t the way we wanted to finish, but it was a lot of effort from everyone, especially in the second half of the season."

Lakeville, Conn. – After starting on the front row, Action Express Racing had been hoping to close out the GRAND-AM era on a high note at Lime Rock Park with two strong performances in both the No. 5 Corvette DP and No. 9 TOTAL Lubricants Corvette DP, but the group faced disappointment in the final round of the 2013 GRAND-AM Rolex Sports Car Series championship. 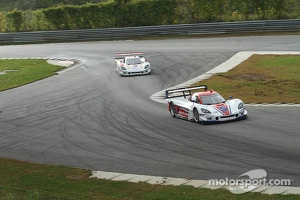 The compressed race day schedule saw the Rolex Series take to the Lime Rock Park road course for a 15-minute qualifying session in the morning in which Christian Fittipaldi, who shares the No. 5 Corvette DP with Joao Barbosa, turned the second quickest time of the session to score a front row start. Burt Frisselle, who teams with his brother Brian in the No. 9 Corvette DP took the sixth starting spot on the 14-car Daytona Prototype grid.

Fittipaldi opened the race from the second on the grid and held the position throughout the first 45 minutes of the race, while the No. 9 TOTAL Lubricants Corvette DP of Burt Frisselle also ran in top-five contention in the opening stint.

Unfortunately, the positive momentum of the No. 5 machine would come to a halt after the flat out race pace took its toll. A quick off and on by Fittipaldi forced him to the pits early to hand the car over to Barbosa and clear the grass from the radiators.

After a quick stop by the Action Express squad, Barbosa headed back on track only to need to immediately return the car to pit lane with a low oil pressure warning. Unfortunately, the issue proved terminal and the team was forced to retire the No. 5 Corvette DP early.

“There was no indication when I brought the car in for the pit stop of anything being wrong,” said Fittipaldi. “I had a small off before I came in for the pit stop and we came in because we were in the pit window. We came in just for safety measures, to make sure everything was okay on the car. Everything seemed to be working okay up to that point. But when the car went back out, we had a little problem with the engine.”

Meanwhile, Burt Frisselle had continued to run at a rapid pace with just one caution displayed during the entire opening stint. He had worked his way up the order into second, when Action Express Racing called him to pit lane under green flag conditions for fuel, tires, and a driver change after about an hour of running.

Brian Frisselle took control of the No. 9 TOTAL Lubricants Corvette DP and emerged from the pits ninth in the order. In a race that ran at a furious pace around the short 1.53-mile circuit, with just three short caution periods, Brian faced frustration as he struggled with the balance of the car and was unable to make up the necessary time on the leaders and took eighth at the checkered flag.

“First of all, congratulations to Wayne Taylor Racing for three wins in a row and such a strong finish to the season,” said team manager Gary Nelson. “It sets the bar pretty high for next season. Our season started off a little rocky but we seemed to get our footing in the middle, and then some things didn’t go our way at the end.

But all the way through, we showed that we had speed, and continued that today by starting on the front row and running in the top-two until our trouble started. Then that was the end for the No. 5 car. It was also a similar season for the No. 9 car. Obviously there were a lot of firsts for us this year, with Christian being away from GRAND-AM for so many years, he had to get used to things.

Then some of our other issues that came after us after our strong runs at Mid-Ohio, Watkins Glen, and Detroit. Things didn’t go our way with the strength of some of the other competitors.”

Christian Fittipaldi, No. 5 Corvette DP: “That wasn’t the way we wanted to finish, but it was a lot of effort from everyone, especially in the second half of the season. Unfortunately it didn’t go our way today, as well as at Indy and Laguna. On the other hand, we can’t forget that at Elkhart Lake we did finish where we should have finished with a double podium result. All in all, I’m very happy, I’m very thankful to Action Express, to Chevrolet, to Joao and also to Brian for the first three races we did together this year.”

Joao Barbosa, No. 5 Corvette DP: “It’s been a great year. The Action Express guys deserved to finish the year on a high and fighting on the track for whatever position we could get, but unfortunately it’s racing, and problems that are out of our control sometimes happen. I’m just really proud to be a part of the Action Express team. We work hard and came back from some big deficits and proved that we can be a strong team, and we just keep getting stronger and stronger, so I’m just eager for the future.”

Brian Frisselle, No. 9 TOTAL Lubricants Corvette DP: “I’ve just got to thank this team for the opportunity. They’ve been great all year, they’ve had great strategy, and great pit stops. I really wish we could have brought them home a better result today. I just really struggled with the balance of the car throughout the race.

It wasn’t the sweetest 100th race for me, but I’m thankful for all of it, and I’m already looking forward to next year. It is an era closing, and I think it’s been an era of some of the best racing in the world. GRAND-AM is so special to me, because it has allowed me to live my dream as a professional racecar driver, and it just produced great, great racing. I think that’s how fans will remember it and hopefully as they move into this new era they keep that great racing alive. GRAND-AM is the best, but I’m looking forward to the future too.”

Burt Frisselle, No. 9 TOTAL Lubricants Corvette DP: “The guys at this team work at a championship level and I know Action Express will have their championship at some point, so I was bummed for Christian and Joao and the No. 5 crew. It was a tough day for us, it was really hard-fought out there. We really fought a lot of understeer in the front of the car. We were able to stay up in the top-five the entire first part of the race, but just the way the sequence went, we fell back.

I know these guys will start working the day they return to the shop for next year and this team will get a championship sooner rather than later. Brian and I both had our 100th (GRAND-AM) start this season, so that’s kind of special. I’m happy to have done it with an organization like Action Express. It will be neat to start a new chapter in the TUDOR United SportsCar Championship, so hopefully we can win the first championship there.”