Alessandro Balzan arrived on the American racing scene last year for the GRAND-AM Rolex Series final two events in 2012, and now he is aiming for his first championship in the grand finale for the series this weekend.

The first impression when meeting the Italian is his pure enjoyment of life and noticing his enthusiasm along with his competitive nature. Balzan does not hold back his passion for racing. 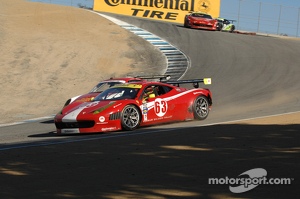 At the 2013 penultimate race, Balzan reflected on his first challenge in his debut race at the Mazda Raceway Laguna Seca with the new Rolex series GT class Scuderia Ferrari 458 entry. When Scuderia Corsa team owner Giacomo Mattioli decided to contest the Rolex series, he and his team were and still are active in the Ferrari Challenge Series.

One year after their first Rolex series race, the team returned to the California circuit. Balzan reflected on his first visit in 2012. He said he was surprised at how windy it was which caused the sand to drift onto the racing line. On his return to the track, the Italian said, “It is good to have last years’ experience.”

Two time champion Leh Keen joined the team at the Indianapolis Motor Speedway road course event. Prior to joining forces with Balzan, the two were rivals. One would not realize that fact when chatting with them. At times they easily finished a sentence that the other started. A good sign when drivers share a racing machine.

With Balzan holding the points lead after his and Keen’s victory in Kansas, the two racers arrived at the California circuit in high hopes for a top finish at the home of the Corkscrew. “We won at Kansas, and we know we have a good race car here (Laguna Seca),” said Keen.

Balzan added “There is some pressure being the home race for the team but that is good to have as we carry the Silicone Valley Ferrari colors (livery) so we hope for success.”

Holding the points lead after his and Keen’s victory in Kansas, the two racers were ready for the challenge of the Laguna Seca - a track that Keen had taking a victory at before, and one that Balzan knew. However fate stepped in when their Ferrari was hit not once but twice which caused damage and took away a podium finish. The GRAND-AM officials did review the incident and awarded the No. 63 Ferrari third place.

Mattioli said “Every team deserves a fair chance to compete and the process that maintains this was appropriately implemented by officials. We ran a fantastic race on Sunday and are now focused on getting ready to go for the championship at our last race of the season at Lime Rock.”

Balzan has a shot at the GT crown. The Italian sits second with 309 points while Andy Lally and John Potter have amassed 313 points in their Porsche GT3.

With the Italian’s gusto and Keen’s technical ability, the two make an awesome duo. Now they and the team are ready for the “Bullring” road course in Lime Rock, Connecticut.

They both agreed that it is easy to spin in certain corners plus “the runoff areas do not have a lot of room and the track is very fast and technical.” 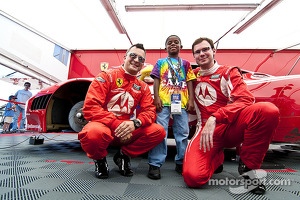 One thing is certain, the Italian has plenty of gusto!