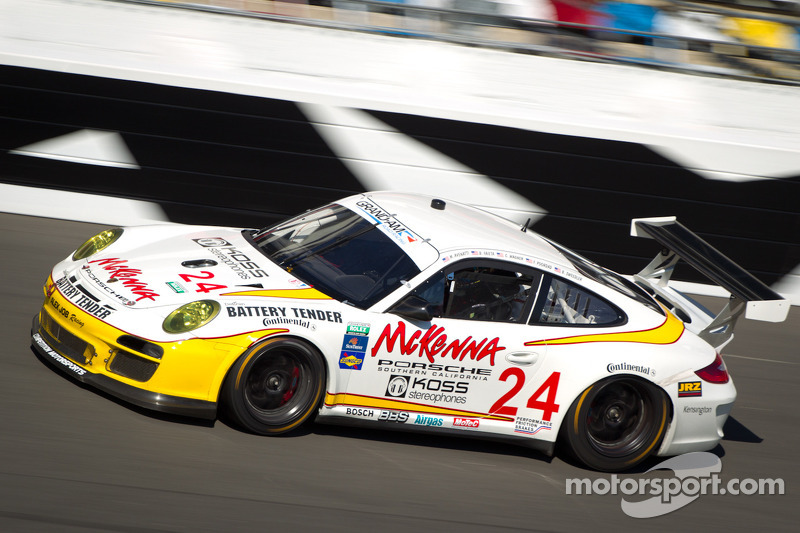 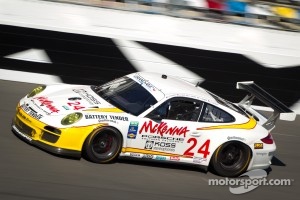 The No. 24 McKenna Porsche/Battery Tender/ Kensington/Koss Stereophones/Alex Job Racing GT3 Cup car driven by Cort Wagner, Bill Sweedler, Fred Poordad, Bob Faieta and Michael Avenatti took a conservative measured approach to the race. The five drivers ran consistent lap times, never went to the garage for repairs, kept the yellow, red and white Porsche on the track and were rewarded with a top 14 finish in GT, 25th overall in the 54 car field today. Any other year a good, no problem run like that would be a top five finish or even a podium.

"My last stint was fun," Poordad said. "The track was greasy and there was a lot of traffic. I got punted in the Horse Shoe, but managed to keep the car straight and on the track. It was a great experience to run this race. Our guys brought the car back in one piece for a good finish. It was fun. I enjoyed it."

"It was a great race, with the 50th anniversary," Sweedler said. "We were looking for a podium, but there was great competition today. We got screwed up on the wave-bys. It was disappointing the way that those were managed. This is an incredible event. You have the best drivers from around the world, a great experience to be here."

"I had a great weekend," Wagner said. "Alex Job and the WeatherTech team, sharing the information, it was a real team effort. All our guys got along great and did a great job driving. I enjoyed the process with the guys and the team. Any other year we would have had a top five finish. The new rules are confusing with the yellows and the wave-bys and I think everyone on pit lane had problems with it."

"This was awesome," Faieta said. "My stints today were great until we lost second gear in the afternoon. We were able to drive around it to the finish. It was a great experience, and I hope to do it again next year."

"The car ran as good as could be expected," Avenatti said. "Alex and the team, our crew chief Bill Radar, all did a great job preparing the car. It is a really difficult race with the level of competition. A top fifteen finish is good for us. All the drivers did a great job. We ran a near-perfect race." 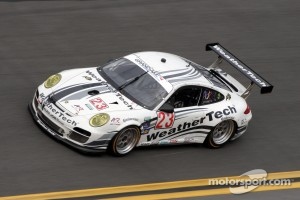 The No. 23 WeatherTech/Alex Job Racing Porsche was running strong in sixth place on lap 728, around 1:30 p.m. Marco Holzer was in the car and exiting the Bus Stop Turn when a suspension problem stopped him on the apron of NASCAR Turn Three. The No. 23 WeatherTech Porsche had to be towed to the garage for repairs. Cooper MacNeil returned to the action taking the checkered flag in 17th. The team consisting of Holzer, MacNeil, Emmanuel Collard, and Butch Leitzinger ran a good fault-free race until the suspension problem.

"The car was great up until two-and-half-hours to go when Marco had the part failure," MacNeil said. "You can't prevent machinery from breaking. The AJR guys and WeatherTech put a great car on the track. I had a great weekend. I ran the fastest laps that I have ever run here. I was happy with my driving, and I am looking to improve to come back even stronger next year."

"My last stint was really bad," Collard said. "The safety car was a disaster. Every restart I had to warm the tires again. I had a small problem with the brakes. The crew was able to fix it. The balance of the car was bad at the end, there was a lot of understeer. But all of these things you expect at the end of a 24-hour race. It is too bad about the part problem at the end."

"We had a good run," Leitzinger said. "I was leading this race once with a two-hour lead and blew a motor with two-and-a-half hours to go. I can't kick any dogs over this. I feel bad for the crew. When you can see daylight, it is tough to have to do serious repairs that late in the going. It is fun to be with a professional group like AJR. David MacNeil from WeatherTech was very supportive, and I enjoyed my co-drivers."

"Before we had the suspension problem the car was great," Holzer said. "I was able to drive the fastest race lap in GT, which is good for the team and means the car was very good. We were unlucky with the yellows. Three times we came into refuel then yellows came out, just unlucky. We lost three laps as a result."

Team owner, Alex Job, is happy to have both cars finish, yet thinks of what could have been.

"The guys in the 23 WeatherTech Porsche were really fast," Job said. "Into the night we were swapping the lead among six cars until the early hours of the morning. We had some tough luck with yellow flags that put us down three laps. It was just too hard to come back with the level of competition in the GT class this weekend. The 24 McKenna Porsche Battery Tender car ran really fault-free all weekend. The guys took a measured approach and any other year that was a top five run or even a podium."