Allan McNish returning to Daytona 24 in 2013 with Starworks

FIA World Endurance Championship runner-up Allan McNish aims to get his 2013 season off to a flying start by contesting the Daytona 24 Hour endurance sportscar race next January. Dumfries-born McNish has finished second at Daytona three times from eight starts and is looking to the burgeoning Starworks Motorsport team to enable him to score his maiden win in the Florida classic. The twice-around-the-clock race is a one-off with Starworks for McNish who shares a Riley-Ford with Sébastien Bourdais (France), Ryan Dalziel (Scotland) and Alex Popow (Venezuela) before the Scotsman begins his 2013 race commitment with the "factory" Audi Sport team.

"I'm driving for the same team and car as last year at Daytona, a Starworks Motorsport entered Riley-Ford, and the same drivers mainly, confirmed McNish. "I'm looking forward to going back to Daytona and targeting that elusive Daytona victory for the team and myself. Daytona has been a race that has given me happiness but also left me frustrated. I finished second overall and first in GT on my debut there in 1998 which preceded my first Le Mans 24 Hour race victory. The following year we led most of the race but dropped to second after a late pit stop while last year we were second again by just five seconds after 24 hours in what is always a hotly contested race." 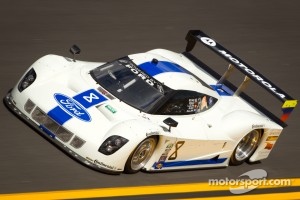 The Rolex 24 staged at the Daytona International Speedway over 26-27 January offers McNish a very different challenge in many respects compared to his regular commitment with Audi Sport. Allan continued: "The Daytona Prototype car that I'll drive is very different to my Audi sports-prototype. The DP car is very ‘lively' and moves around as these cars don't have a lot of grip. They have a reasonable amount of power but the racing is aggressive. Starworks is a small team based in Fort Lauderdale, Florida, and so not surprisingly is very different from Audi Sport, the big ‘factory' operation and manufacturer team that I contested the 2012 FIA World Endurance Championship with. At the 2012 Le Mans 24 Hours when Audi had four cars, there were around 140 personnel in attendance and so it is very different to drive for Starworks at Daytona in what is a small, family orientated team reminding me of many things that I love about this sport.

"Although small, Starworks is already a big achiever. This year alone they've scored class wins in the Sebring 12 Hours and Le Mans 24 Hours, clinched the coveted FIA Endurance Trophy, are the LMP2 Champions in the FIA World Endurance Championship, won GRAND-AM's inaugural North American Endurance Championship and finished runners-up in the Teams (DP) championship." Granted permission to race at Daytona by Dr Wolfgang Ullrich, Head of Audi Sport, McNish believes that Audi also benefits from his participation in this race in terms of physical fitness and mental honing in readiness for his commitments with the German manufacturer.

"I have found contesting the Daytona in January as a very good way to focus on the coming season after the winter break," states McNish who will take part in a pre-race test at Daytona (6-8 Jan). "It allows me to shake off the cobwebs and although a 24 hour race is a hard way to start the year, it's also a very good way in terms of physical fitness and from a race mentality point of view. There will be a large entry, split into two classes, so that means a lot of ‘traffic' making it a lot of fun as well as hard competition. Overall, we are looking forward to Daytona, and try and go one better than we did in 2012."

Peter Baron, Team Principal of Starworks Motorsport, added: "I'm grateful Dr Wolfgang Ullrich and Audi Sport allows us the opportunity to have Allan race with us at the Rolex 24 at Daytona. The Rolex 24 attracts world class drivers from all disciplines of racing, each seeking racing's most coveted reward, the Rolex watch that bears the race's name. Allan has received many Rolex Daytona's as awards, but never one from winning Daytona overall. It is my personal mission to bring Allan back to Daytona every January until we can fill the one last award missing from his massive trophy room. We have never been better prepared or have entered with such an amazing line-up of drivers. I think this might be the year!"