The author gets a high G load look at a top professional race driver plying his trade around VIR - one of the most challenging circuits in North America Special to Motorsport.com by Bill King It was mid-week at Virginia International Raceway, ...

Special to Motorsport.com by Bill King

It was mid-week at Virginia International Raceway, and the No. 20 Citgo Howard-Boss Motorsports Pontiac Crawford squad was there to test for the Oct 7-9 VIR 400, the penultimate stop on the 2005 Grand American Rolex Sports Car Series trail.

As part of the race promotion effort, Andy Wallace was giving media rides in the Daytona Prototype while teammates Milka Duno and Elliott Forbes- Robinson were hauling TV camera crews around in pace cars. 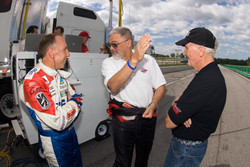 "G, what a ride!" the author tells Andy Wallace (left) and Elliott Forbes-Robinson.
Photo by Victor Newman.
My turn came and Mr. Wallace was primed to give me the quickest lap that common sense and professionalism would allow. "It's poor form to crash with a bloke on board," he grinned.

Knowing this was going to be a big G ride, I asked for an extra tug on the belts. Max Crawford suggested I not wear my horse collar, as the seat position tended to push your head too far forward to comfortably see out the windshield. So I squeezed a corner of the collar between my chest and the front lip of the helmet to neutralize the braking Gs. Then I took a solid grip on either side of the front of the helmet and was set to become a human accelerometer.

Mr. Wallace engaged first gear and we left the pits in a nice 1G burnout. Since the tires were already pretty warm from previous "rides", he got right down to work.

The first corner is a long right hand hairpin of around 200deg. After a 1.7G braking effort, I was happy to have had that horse collar stuffed under my chin. As we trail-braked down to whatever serves as an apex for a Daytona Prototype, Wallace also changed down from fifth to second. At that point, we'd decelerated from 165mph down to 48 before he picked up the throttle to hold a fairly steady 1.3G through the exit of the Horseshoe where we touched about 110mph.

There was a lot going on in the seemingly inconsequential left sweeper that leads down to the hard left-hand NASCAR bend. A little brake-throttle interplay was going on as Wallace changed down from fourth to third, catching a momentary 2G spike in lateral acceleration. That little section was one helluva lot busier than I'd have ever expected.

NASCAR itself is a 70mph, third gear left where you pull around 1.8G for about 150m. I was already very glad to have both hands holding my head upright.

The Left Hook is an important, if slow, corner as your exit position determines how well you get through the next third of a mile of twisty bits. Wallace did it perfectly, coming out of the 1.7G/50mph/second-gear left on the extreme left-hand side of the road.

The VIR track map indicates that the next two right turns are separated by a very short straight. In reality, you're still pulling a little less than 1G on that straight, entering at 1.7G and exiting at 2G. Then you're immediately into The Snake. Although it's 60-80mph work, the Crawford pulled 1.5G left, 1.2G right and 1G left in the space of 200m.

Wallace eases the Crawford into the first left, flat in fifth at a nice, steady 1.5G. Then all hell breaks loose. Bang to the right, jump the curb, flat in fifth - 2.7Gs. Bang to the left, jump the curb, still flat in fifth - 2.3Gs. Scrubbed down to 140mph, the Crawford finally washes out in the final right at the top of the Esses - still pulling 2Gs. With some very quick throttle modulation and wheelwork, Wallace reels the No. 2 back in, and we're off for the blind left-hand South Bend.

Exiting South Bend at 103mph and 1.8Gs, the Crawford finds the road dropping dramatically and almost as abruptly climbing back uphill and to the right for the run up to VIR's signature feature - The Oak Tree Turn. It's a very busy section of racetrack for a Daytona Prototype with some straight-line braking and a two-gear downchange before the 45mph hard right that leads onto a 7/8-mile downhill-uphill-downhill straightaway.

The slow entrance from Oak Tree, combined with a nearly half-mile uphill pull makes the terminal velocity on the backstraight roughly the same as the shorter but flatter front straight with its much faster entrance.

I now have a chance to give my chauffeur a thumb's up which he returns. We're running about like I'd hoped we would, although my adrenalized brain is barely keeping up.

Then Wallace takes us down to the No. 1 braking marker where he stands on the slow pedal and turns into the fast left sweeper that leads into the downhill esses, dubbed the Roller Coaster. In the 150m past the No. 1 marker, I get the full effects of 1.8G braking from 163 to 50mph, combined with 1.5G lateral acceleration and a three-gear downchange. I maintain a firm grip on my hat.

The Roller Coaster resembles a mirror image of Laguna Seca's signature Corkscrew with slightly less initial plunge. [There's a virtual replica of the Corkscrew on VIR's South Course.] The Roller Coaster is a 1.6G right followed quickly by a 2.3G left that connects immediately to a long 1.5G left sweeper down into the critical right-hand Hog Pen combination that leads onto the 3/4-mile front straight past the pits.

Hog Pen exerts between one and two Gs for more than 200m and between a half and one G for another 200m before you hit the front straight, which is not quite straight. There's a 1G right-hand kink just past the start/finish line with a residual half-G of lateral acceleration all the way down into the 2G braking zone for the Horseshoe and that's a full lap of VIR with Andy Wallace in a Daytona Prototype.

Later, over a typically sumptuous VIR media lunch - simply the best anywhere - I asked Wallace just what effect my additional 200 pounds had on the Crawford's performance. He was quite happy to elaborate.

"Unfortunately, when you set the car up, the driver's offset to the right. When you set the wheel weights and everything up, you set it with the 150- pound driver weight in. Then, the first thing you know, there's a 200-pound passenger putting weight on the two left side wheels, so the right front slides. So I have to back the braking up - first of all, for the actual weight but also if I brake in the normal place, I just lock the right front up. So I'm braking a good bit earlier. That's the first thing.

"Next, the acceleration is worse, obviously, per weight.

"And up through the Esses, when you've got a new set of tires on, low fuel and everything's absolutely right, you can go flat all the way through up to the top of the hill, absolutely without lifting. When you've got a passenger, I can do the first one flat and the second one flat and then it washes out and you've got to get out of it in a hurry because you've run out of road. You're doing about 150mph there - 155, maybe - and you just get a big, big flat slide even though you've got all that downforce on, because of the extra weight.

"Also, with a passenger on board, I'm not sure you've got enough elbow space for some of the maneuverings, so I was a little more gentler on stuff than I would normally be.

"The other thing too is that when you've got a passenger in, it's politically very bad if you crash. So what you tend to do is just leave a little bit more of a margin. I've left probably about three or four inches each side of me that I wouldn't normally leave."

I then asked Wallace how our lap compared to what he expected for a qualifying lap for the VIR 400 in October.

How hard was Wallace running when he warmed the car up this morning?

"I was pushing it pretty hard. It was moving around quite a lot. What I would have liked (for carrying a passenger) is probably a bit more rebound on the car - hold it down a bit. Once the back starts floating, we have to be a little bit more careful because it uses up more road than you think - in a heartbeat, actually. On this car today the brakes take a little while to get happy. In fact, a new set of brakes would help enormously."

So our lap was a couple of seconds off what Wallace could have done under normal conditions and well off a qualifying flier in October. Now that would be a ride. Of course, I'd have to weigh maybe two pounds so I could sit on Wallace's shoulder and not mess up the car's balance.

Andy Wallace and about 30 more Daytona Prototype drivers will be out in full force for the VIR 400, October 7-9. Advance sale three-day super tickets are 50 bucks (www.virclub.com).