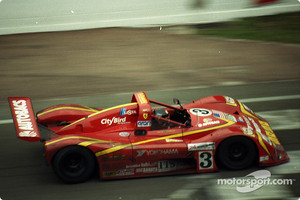 How did you meet Gianpiero for the first time?

AL: "Didier was driving for Moretti then and so I said to Didier, 'is there any way I could hook up with you guys to do the Rolex 24?' I always loved doing the 24 Hours. I finished 2nd in 1986 the first time I was there. I drove with Danny Sullivan and A.J. Foyt in a 962 Porsche, and we were leading and it was actually looking like we were going to win the race and then the throttle cable was burned and jammed up and we lost a lot of time in the pits. We finished 2nd behind the Al Holbert car, only one minute 36 behind. I was like, 'man. I almost won it the first time out', so I always wanted to win that race. I led it many times, with Nissan as well."

How did you manage to get the 1998 winning ride?

AL: "Then Didier was working with Moretti. The thing about Moretti was he had a lot of character, he was a very bon vivant, a guy who enjoyed life, and he smoked the cigars and he was little bit overweight and he wasn't like a real race driver but he was just having a good time. But he was also a guy who liked the hustle and bustle, he always liked to wheel and deal. And he goes, 'yeah, I want you to drive for me but you have to bring some money', and I go, 'look, c'mon man, I've got to bring you money now', and he goes, 'no but I'll give you so much of the prize money', and this and that, 'but I still want you to bring some money'. I go, 'so you just want me to bring money so you can say that you made a deal so that I brought money, that's really what you want'. We kind of laughed back and forth and we put stickers on the car, Provimi, and Wavephore. Anyways, it was really peanuts but he just wanted to make a deal. That was in his make-up; he always wanted to wheel and deal. We had dinner together with Didier and him and it was really a good time. Very Italian, very relaxed."

Do you have a special story about Gianpiero from the 1998 Rolex 24?

AL: "The team was run very well by Kevin. The car was really good. It was funny, the meetings we had, as far as the driver meetings, they were very relaxed. The one thing that Gianpiero kept saying the whole week, you know, 'there's going to be 80 cars here and about 70 of them are slower than us so we have to watch out that they don't hit us or we hit them', you know, and he kept hammering on us not hitting any back markers. Anyway he goes out and I think within the first thirty minutes he hits a back marker. He was the one shouting all week, 'don't hit a back marker' and then, you know, he got clobbered by one because he made a mistake and it took out the whole side of the car.

About your relationship with MOMO's founder Gianpiero Moretti:

AL: "We spent very little time together during that race weekend and the thing is we had dinner together, but he was also interested in Didier who was there, and Mauro Baldi, and I was there, and the four of us we just had a good time having dinner together but there were never any in-depth conversations or 'how did you become successful with MOMO?'. But of course, he built that brand, he created it, and it's well-known all over the world, which is obviously an accomplishment. I knew of his racing, I knew he was a gentleman driver but he was not top of the bill race car driver but he was always involved. I never sat down with him one on one, really, it was always Didier, Mauro and me and we just kind of went out to dinner. And then once the race weekend starts there's not much talking. We spent very little time together during that race weekend."

AL: "I was obviously very happy but it was a tough race. We were not the quickest, for sure, but especially in those days, 1998, you didn't have to be the quickest to win, you just had to be consistent and finish. But of course, we lost a lot of time when Gianpiero had that crash in the beginning and I had a couple of instances where I really contributed to the win. I always joke around that I never drove so slow to win a race. At one point the car had a huge vibration, and then when I touched the brakes, the vibration would just go through the whole car and I wasn't sure what it was and I told them on the radio and they said just baby it, just nurse it, so I nursed it for about an hour and I brought it home and then they fixed it. It was a wheel-bearing going out on the right rear. And also another thing was I got a little misfortunate but also quick thinking, I got a blow out on the tire as I came through the banking by the start/finish line. And I didn't waste any time. I just drove right across the grass into the pits. I wasn't sure if it was legal or not, but I figured if I go around the whole lap I will destroy the bodywork. So those two things were contributing to the win. But, like I said, I never drove so slow to win a race."

Tell us the story about Gianpiero Moretti and the Rolex Cosmograph Daytona.

AL: "I think the Rolex watch is a symbol of winning the 24 and I know he got close to winning that race before with his teams, and it was a bit of an obsession with him and of course he could buy as many as he wanted, we all can afford to buy a watch. But for him that was very significant, to be able to carry a watch that his car won with; so that he got the watch because his car won. Right after that he never drove again, I think that was it, he retired. It was really neat to see someone putting in so much effort, and of course, all the money throughout the years, to finally achieve what he wanted to achieve. It's a beautiful thing, it's like when I won Indy in 1990 I think, it was special to me. The guy who really helped me get to that point, the owner of Provimi Veal - I thought enjoying the moment with him was one of the best moments of winning that race, just because he had so much to do with it. It's the same with Moretti, he's a driver but he was more of a sponsor and a team owner. It's sad that he's gone."