Gregory Liefooghe and Tyler Cooke lead most of the Lime Rock season finale, resulting in a well-deserved finish.

The BMW aftermarket and tuning experts at BimmerWorld needed something close to a vehicular miracle at last weekend’s GRAND-AM season finale in Connecticut. 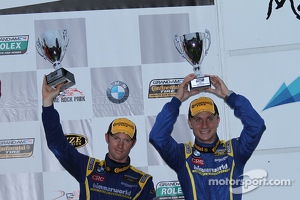 With the No. 81 BimmerWorld BMW 328i duo of Gregory Liefooghe and Tyler Cooke holding third in the Continental Tire Series Street Tuner standings, and the No. 82 CRC BRAKLEEN® BimmerWorld BMW 328i of Seth Thomas and Dan Rogers holding fourth in the Championship, finishing 1-2 in the race at Lime Rock was only half of what would be needed to secure the team’s first ST title.

The significant points lead held by the first-place team meant they would need to finish well down the running order to give BimmerWorld’s No. 81 and 82 a chance to bridge the Championship gap, but if the leaders maintained a decent position inside the top-10, which is what took place, winning wouldn’t be enough to overcome the deficit.

Another strong run by BimmerWorld is what the record books will show at Lime Rock, and with Liefooghe and Cooke taking third in the Drivers’ Championship, BimmerWorld has demonstrated its consistency and strength in the series by placing its drivers second, third, fourth and fifth in the ST Championship since 2010.

Team owner/driver James Clay was obviously hoping for all of the planets to align in BimmerWorld’s favor, but with such a competitive series, he wasn’t surprised with the Championship outcome.

“The final race at Lime Rock was exactly what we expected and wanted it to be – almost,” he said. “The No. 81 nearly won the race after leading for a long period and gained significant Championship points in the process. The No. 82 also ended up on the podium in the post-race ceremonies, which was a solid end to their season as well as the team's. And the new F30 marked its first top-10 finish which confirms the progression in our development of that car for a competitive 2014 season.”

Clay also spoke to the disappointment felt by Rogers and Thomas, who entered Lime Rock fourth in the Drivers’ standings.

“Unfortunately Seth and Dan in the No. 82 CRC BRAKLEEN® BimmerWorld BMW 328i ran into problems on track, but with the limited space and minimal passing opportunities at Lime Rock, this was an unfortunate, but not altogether unexpected casualty,” he continued. “The push by the No. 81 at the end of the season to win the Championship fell slightly short, but a third-place season finish for them is still strong.

“We always want to win everything, execute to perfection, and have everything fall our way, but it’s called ‘racing,’ not ‘winning,’ and I am proud of everything BimmerWorld achieved at this race and throughout the year.”

For Liefooghe and Cooke, leading Lime Rock and finishing second in the No. 81 was bittersweet, but with a win to their credit at Elkhart Lake, it also cemented the duo as champions in the making.

“Going into the weekend we wanted to make sure we would do our best with the elements we can control and I think we were successful in that regard,” said Liefooghe. “The fact that we missed the win by a small margin was a bit frustrating, especially since it would have given us a second place in the Championship, but the main goal of the season was to be a championship contender going into the last race, and that goal was reached.

“The season was a success, and we have been fast all year long with a good amount of bad luck towards the middle of the season. The level of competition in ST keeps increasing with cars getting faster every race, so the fact that we made a strong comeback at the end of the season speaks volumes on the level of preparation and engineering at BimmerWorld. “

Cooke, who completed his first season with BimmerWorld and second in the ST championship, developed into a consistent threat alongside his veteran teammate.

“Greg and I built a strong track record this year: we were constantly in the top -5 and were usually in the mix with the leaders,” he said. “The season was a great effort from the whole team. BimmerWorld gave us a great car every race and I’m really looking forward to next year.”

With the No. 80 of Strelzoff and Bloum completing the Lime Rock podium, BimmerWorld’s newest driving combo captured their third top-3 of the season.

“We’ve had our ups and downs this year, especially with Connor breaking his leg and having to miss a couple of races, but getting another podium was a great way to round out our year,” said Strelzoff. “This team has a lot of fight in it and never gives up, and we try and do the same inside the car. Three podiums in our first year with BimmerWorld is something to be proud of.”

Ending the 2013 season with a 26th place run at Lime Rock isn’t what Rogers and Thomas had in mind, but the two dealt with the dissatisfaction with class.

“The race was an extremely disappointing and frustrating way to end what was otherwise a great season,” said Rogers. “No. 82 CRC BRAKLEEN® BimmerWorld BMW 328i was in the hunt for the championship from the beginning of the season, and the last two races, particularly Lime Rock, were extremely frustrating. We all do what we do in the car because we are driven to win. When we don't achieve that goal, it hurts.

“The relevant question is: what do you do with that disappointment? The answer for us is we'll be coming back with more focus and intent on winning the ST championship in 2014.”

Thomas echoed his teammate’s assessment of the season and their future together.

“Overall it was a good year for us,” he noted. “Dan and I became a faster duo in our second full season as teammates. We had strong runs at some of the key races while maintaining a good position in the points the whole season. Now we will be reflecting on the season to learn how to come back into 2014 as a strong contender for the title and make it happen.”

“I knew in the race at Monterey that the F30 was on its way to being a competitive platform,” he said. “We have been working closely with GRAND-AM to produce the appropriate power level, which to me is the final piece of the puzzle. I am really happy with the performance of the new car, and F30s will certainly represent a growing part of our future at BimmerWorld Racing into 2014 and beyond.”

“It was an honor to drive the F30 with James this season and be a part of the development,” he said. “I do believe that the new skill set will be very beneficial for 2014. There are good things to come at BimmerWorld!”