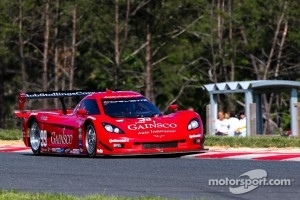 Fogarty also won the pole last Friday in qualifying for the Chevrolet Detroit GRAND-AM 200 on Belle Isle where he joined teammate Alex Gurney for a fourth-place race finish. Friday’s pole at Mid-Ohio extended to 21 Fogarty’s record as the all-time Daytona Prototype career pole winner and gave him his first back-to-back top qualifying streak since he closed out the 2011 season with poles in the No. 99 at Montreal and here at Mid-Ohio.

“Being able to qualify is just a fantastic opportunity that I get each weekend so I want to make the most of it,” Fogarty said. “The way we run it at GAINSCO is that we have kind of established that I usually qualify and start the races, Alex is our closer, so qualifying is kind of my time to shine and make the most out of it.”

As has been the case at the last few races, the No. 99 GAINSCO “Red Dragon” rolled off the trailer fast on Friday but the GAINSCO/Bob Stallings Racing team knew winning the pole might require a drastic change.

“We had been watching the times in practice, GRAND-AM now provides us with split-time data, and the 90 car was really strong in the previous session,” Fogarty said. “So we went big for qualifying and didn’t really have any idea if it was going to work, but it did. We made big setup changes, which was certainly a gamble considering we had pace in the practice sessions, but it seemed like we were kind of losing ground so we rolled the dice. We have to think about the race now; it might be a different scenario.”

Fogarty took the pole with his first lap of the 15-minute session and improved on each of the following circuits. His lap three time of 1:18.079 (104.110 mph) was good enough to lock down the pole by nearly 4/10ths of a second over the similar No. 90 Corvette Daytona Prototype of Michael Valiante. GAINSCO and Fogarty even had enough of a cushion to retain the pole while recovering from a late-session spin in Turn 2, Mid-Ohio’s “Keyhole” turn.

“I even pushed it so hard that I ended up spinning in Turn 2 trying to better my lap time but luckily I got a solid time in prior to that incident and I was able to rejoin the session,” Fogarty said. “The temperatures have been climbing all day, and it is pretty warm out there right now, so I got the best out of the Continental tires early on which was good.”

GAINSCO, Gurney and Fogarty are looking for their third victory at Mid-Ohio to go with EMCO Gears Classic wins in 2007 and 2009. A win tomorrow would also be GAINSCO’s first of the 2012 GRAND-AM Rolex Sports Car Series season and would go a long way in erasing what has been an up-and-down season of mixed luck so far this year. The fourth-place finish in Detroit was just GAINSCO’s second top-five finish in the year’s first five races.

“We feel definitely confident for tomorrow,” Gurney said. “We need to pick just the right aero configuration that is going to allow us to race the best. We were optimistic before, we still are, and we just want to get the monkey off our back. The whole team is working really well, our new engineer John Ward has fit right in; we are all on the same page and communicating really well and getting down to the fine details. It is really adding up.”

In addition to extending his career Daytona Prototype record, Fogarty now has four career Daytona Prototype poles at Mid-Ohio. Gurney also won the pole with GAINSCO at Mid-Ohio in 2005 for just the second career pole for the then first-year GAINSCO/Bob Stallings Racing team. In addition to this weekend and last year’s race, Fogarty was also on the pole for the 2007 and 2009 runnings of the EMCO Gears Classic.