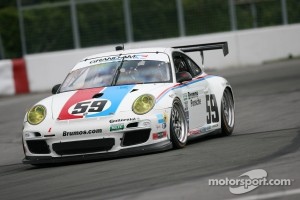 Jacksonville, FL: Traveling to Montreal for the only GRAND-AM Rolex Series race held outside of the United States, Brumos hoped to extend their streak of consecutive podium finishes. From the first practice session on, things were looking good as the #59 Brumos Porsche 911 GT3 performed flawlessly, drawing high marks from Andrew Davis and Leh Keen. Davis turned in an impressive performance in qualifying and appeared en route to claiming pole position before being bested by the narrowest of margins, ending the session in P2. Davis kept the #59 running strong before handing the car over to Leh Keen under yellow.

Keen was heading out on track and ready to do battle when contact with the car in front of him on a crowded turn drew a penalty. The penalty dropped the #59 far back but Keen persevered, working his way up to take the checkered flag in 4th.

Keen had praise for his crew and the car they delivered, saying, “We had a great car right off the truck and were really excited because the #59 was so quick. Andrew did an awesome job putting us on the front row and we were definitely looking forward to the race. This was a real battle. Andrew kept us up in the front and then I hopped in and we were scrapping in Turn 2 on my first lap. There was a whole cluster of cars and one was trying to go around me. I was trying to keep up with him when some cars ahead of me checked up. I got into the back of the car right in front of me and he spun out. I didn’t mean to have contact, but unfortunately we got a penalty and that put us pretty far back.

"After clawing our way back up to 4th and being one of the quickest cars out there, it was a bit disappointing to finish one spot off the podium. We had a race-winning car and a podium car, but it goes to show how hard the guys worked and how good the car was for us to regain that much ground. At this point it is normal for Brumos to be running up front, and we are looking for wins and podiums at every race. We can’t wait to get to Laguna and show everyone what we can do.”

Andrew Davis also appreciated the efforts of the Brumos crew, saying, “We came into this event in the best form we have shown all season. The guys gave us an amazing car and I felt we were one of the two strongest in the field. My section of the race played out the way I expected. I hoped to close in on the leader but it took a few laps to get heat in the tires, so they built a bit of a gap. Then I was able to pace him and the two of us kind of pulled away, which opened up our strategy a bit. We came in early for our pit stop to get Leh in under an optimally timed yellow and then it was that dogfight that we always see.

"After the penalty knocked us back, Leh had to put his head down and do what he could to catch up. We are happy to finish 4th, but it’s too bad we didn’t get to keep our podium streak alive. We certainly had the car and the team for it, but it was just an unfortunate thing. I am proud of the effort the guys put forth and now we are going to be really hungry when we arrive for our next race in Laguna.”

The 4th place finish kept Brumos in 5th place in team points as they begin preparations for the next race to be held at Mazda Raceway Laguna Seca on Sunday, September 9 th, 2012.

Jeff Segal lead points by 29 after finishings second in Montreal