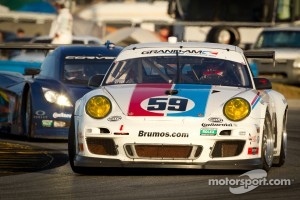 January 31, 2011: Jacksonville, FL: With countless hours of hard work and preparation behind them, Brumos Racing was happy to get back on track at the 2012 season-opener Rolex 24 at Daytona. With momentum of the 2011 Championship behind them, the drivers and crew were confident of their ability to deliver a strong performance and hopeful of delivering a Rolex 24 win as well. The challenges were many, with one of the largest and most competitive fields in Rolex 24 history. Although the hoped-for win proved elusive, Brumos delivered a dominant performance, with the #59 leading the race for 281 laps before ending on the podium with a 3rd place finish.

Andrew Davis faced the daunting task of qualifying the Brumos Porsche 911 GT3 in the 45-car GT field. The crew’s hard work put him at the front of the line as the session began, and he delivered, capturing pole position for the #59. Davis described the race as a grueling event, adding, “This is the first of my eleven Rolex 24 starts where I can say we had a flawless run. There was no time spent in the garage, behind the pit wall, in a tire wall, or in the penalty box. At the end, we struggled with a power steering issue and a misfire so unfortunately we weren’t able to challenge for the win after leading so much of the race. I am so proud of the Brumos crew and appreciate all of the support we receive from the entire Brumos organization.”

Leh Keen also gave high marks to his crew. “We had a stellar performance and raced for the win the entire 24 hours,” he said. “Our podium finish gives us a great start to defend our championship for 2012, and such a strong run throughout the race also helped us in the Endurance Championship. This was personally my best finish at a Rolex 24 and I am very proud of that. It was really special to share the podium with Hurley Haywood on his final Rolex 24 race. All in all, any time you leave a race soaked in champagne, you have had a good day. I can’t wait for the rest of this season and the chance to show everyone what Brumos can do.”

It was fitting that Hurley Haywood ended his 40th Rolex 24 back on the podium, but he was already focused on season ahead. “This was such a hard race,” he said. “We were lucky to have a good car underneath us, and our guys did a great job of driving it. All in all, we ran a trouble-free race until the end. Marc was doing a Herculean job of driving, never knowing from corner to corner if he was going to have power steering or not. But our performance at this race has painted the picture – it has shown our competitors that we are going to be the team to beat in 2012.”

Marc Lieb’s performance in the closing stint was applauded by his teammates, as his efforts kept the

For Dan Davis, the podium represented a new milestone for the Brumos GT effort. Davis said, “Brumos accomplished something this week that we have strived for a long time, and that is to finish on the podium at the 24 hours. We were fortunate enough to do that in our DP car and now we are on the podium again for the 50th anniversary of the Rolex 24. We were also on the GT pole, which I think is a tremendous salute to our team and our drivers. Our strategy didn’t work out quite as we had planned, but a 3rd place finish in this race is something to be really proud of. I thank all our folks for their hard work and dedication to what we’re trying to do - that is, to win races. I thank everyone at all of our Brumos dealerships, too, for all that they do to enable us to continue to go racing.”

The Rolex 24 at Daytona finish puts Brumos in 3rd place in team points standings, and in 2nd place in the North American Endurance Championship, just one point shy of the lead. Following the post- Rolex 24 break, Brumos is back in action on March 31st in the Porsche 250 at Barber Motorsports Park in Birmingham, Alabama.