Jacksonville, FL: It has been a long time coming, but after an absence of more than a decade, Brumos is preparing to race again at Road Atlanta. The Braselton, GA track has seen the famous #59 Brumos Porsche in Victory Lane many times - from the Brumos era of domination in the 1970’s, to Hurley Haywood’s Bridgestone SuperCar championship days. Now the wait is over for the area’s Brumos fans as the Atlanta track hosts the GRAND-AM Rolex Series for the first time. Brumos’ imminent arrival would be hard to miss, given the number of billboards in the greater Atlanta area prominently featuring the iconic #59 Porsche 911 GT3. For this race, however, the car won’t look exactly like the billboard photo, as Brumos will retain the special ‘Racing for Children’s’ handprints adopted at Barber to help raise awareness for the Children’s of Alabama pediatric hospital. 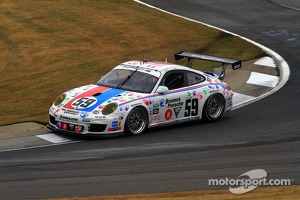 For Brumos drivers Andrew Davis and Leh Keen, the billboards hold special meaning, as both have strong family ties to the area. Leh Keen, who is now an Atlanta resident, said, “Last year it was rumored that Road Atlanta might be on the schedule for 2013. I have raced there in the Petit Le Mans the last few years, but now that the GRAND-AM/ALMS merger has come, I am really happy that I will be able to return as part of the Rolex Series. I live in Atlanta now and was born just a bit south of there. Road Atlanta is one of my all-time favorite tracks, and turn 12 is one of my favorite corners, so to be able to race in the Brumos #59 there is extremely exciting and I’m expecting a good result. Last year when the schedule was announced, Andrew and I both agreed that this would be one we really need to win.”

The track is familiar territory for University of GA graduate Andrew Davis as well. “I am thrilled GRAND-AM is going to be at Road Atlanta,” he said. “I have literally grown up there. I was four years old, sitting at turn 12, watching Hurley Haywood and all of my other racing heroes driving GTP cars, and I’ve been there ever since. Driving the Brumos #59 with Leh in this particular race brings a lot of emotions to me. I remember how important it was back then just to see the #59 Brumos Porsche on the track. Now I will actually be driving it and my young son, Layne, will be there watching. Road Atlanta is a great track for Porsches and Brumos has an amazing history there as well – I think we are going to be really strong and I expect us to be back up front again. We have a lot to fight for and a lot to prove.”

The Road Atlanta race will be round four of the GRAND-AM Rolex Series schedule and will take place on Saturday, April 20th with a start time of 4:30 PM ET.