FOAMETIX/Burtin Racing with Goldcrest Motorsports will field the No. 17 FOAMETIX/Z-Value Porsche GT3 for Claudio Burtin and Martin Ragginger.They will be joined by Jack Baldwin, Mario Farnbacher and Robert Renauer for the Rolex 24 opener.

DAYTONA BEACH – FOAMETIX/Burtin Racing with Goldcrest Motorsports returns to the Rolex 24 At Daytona for the sixth-consecutive year in 2013 with team owner and lead driver Claudio Burtin confirming today that he will co-drive the No. 17 FOAMETIX/Z-Value Porsche GT3 with Martin Ragginger and Jack Baldwin and team newcomers Mario Farnbacher and Robert Renauer. 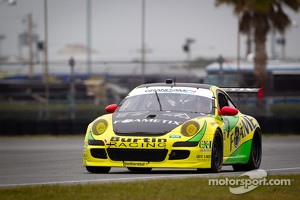 FOAMETIX/Z-Value returns to the Rolex 24 after successfully competing in 2012’s GRAND-AM Road Racing North American Endurance Championship. Burtin and Ragginger closed out the three-race series with a career-best showing of sixth in the GT class at the inaugural Brickyard Grand Prix at Indianapolis Motor Speedway last July.

“Without question this is my favorite race,” Burtin said. “It’s a very, very difficult race. The quality of the drivers is world class from top to bottom. The equipment is also world class. Our car as everybody knows now is in its sixth time here, so she’s a little old. We are just going to do the best we can with what we have.”

Ragginger and Baldwin join Burtin as returning drivers to the FOAMETIX team. Ragginger is a top sports car talent and experienced Porsche driver from Austria who has served as the lead driver for FOAMETIX for the past five years. Baldwin is a racing legend who is a former Trans-Am and IMSA Camel GTU Champion and a former Rolex 24 class winner. Baldwin also scored a Pirelli World Challenge GTS class victory last April at the Grand Prix of Long Beach.

“It’s nice that FOAMETIX made it here again with Goldcrest,” Ragginger said. “We are putting everything together like every year. Our big goal is to finish the race without any issues. Of course you have to have a little bit of luck. We’ve had no luck five times so far. Hopefully the luck helps us a little bit for this year and we have a nice finish in this race.”

“This will be my first time running at Daytona,” Farnbacher said. “Last year I came to observe. The track is nice. It’s totally different from Europe with the banking. I completely love it. I am so excited for the race.”

Renauer’s only previous experience at the Rolex 24 was in a Daytona Prototype.

“This is my second year driving at Daytona,” Renauer said. “The first was six years ago driving a Porsche Fabcar so now it is my first time in a GT car. Daytona is tricky but I love this track and we have a good lineup for the race so I am really looking forward to it.”

Goldcrest Motorsports is made up of the same key personnel that were behind the success of the 2009 championship-winning No. 87 Farnbacher/Loles Porsche GT3 of Dirk Werner and Leh Keen. In 2011, Goldcrest worked with Keen and the returning Brumos Porsche GT3 team at the Rolex 24, which helped move that effort off to a successful start in what proved to a be championship-winning season. Goldcrest also partnered FOAMETIX in its three- race NAEC campaign last year.

FOAMETIX/Z-Value participated in this weekend’s three-day Roar Before the Rolex 24 test at Daytona International Speedway and posted a best time of 1:50.193 (116.305 mph) in Saturday afternoon’s second session.