There was no passing of a torch when Milt Minter died on December 23, 2004. Minter was an original. Known most particularly for his endurance drives in Porsche sports cars from the 60s to this current decade, Milt was one of those guys who could ...

There was no passing of a torch when Milt Minter died on December 23, 2004. Minter was an original.

Known most particularly for his endurance drives in Porsche sports cars from the 60s to this current decade, Milt was one of those guys who could take a sow's ear and make a beautiful pig from it. 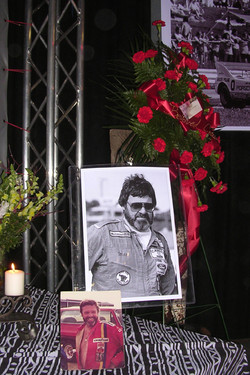 More than 400 people took the trip to his central California hometown to celebrate Milt Minter's 71 years and hundreds of thrilling races on a dank day - in the midst of a series of debilitating storms that have swept through this area of the country, making travel iffy at best - and did so in a manner he would have approved.

The memorial was held in the middle of a garage that could have been Milt's own and nearly a hundred photos were strewn, together with sheet metal, trophies and other mementoes. Chairs, sofas of varying types and comfort levels were placed around the large enclosure. There was light, there was video, there was action.

Milling among the group one found racers, family, friends by the generations, each with stories to tell - nearly all ending in smiles. They ate, drank, laughed and cried in the re-telling of tales. And even a rainbow peered through dark skies above Sanger.

Milt Minter was a fierce competitor and winner in Can Am, Trans Am, IMSA and SCCA racing, beating acknowledged teams and star drivers at their game.

He drove for some of the top privateer teams with owners like Otto Zipper, Vasek Polak, Michael Keyser, Roy Woods. While teams outside factory purvey don't always get the latest and greatest, Minter's innate skills behind the wheel and as a mechanic helped him get the best of his rides.

Most recently Milt mentored and co-drove with Gunnar Jeannette in Grand American Rolex Series, despite the cancer that had ravaged his body - but never his spirit or talent. 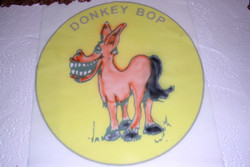 Minter and wife Melissa were among the first to realize staying at the track was better than living in hotels and their varying coaches - plastered with slogans like "more tits in the pits" were acknowledged hangouts for their ever-growing legion of friends.

Minter died with his driving suit on. His cremation might have taken a bit longer than most, but he sure merited the extra effort.

Milt Minter gave a lot of joy to the sport of motor racing; today his competitors, family and friends gathered to celebrate that source of pleasure and to remember the song that personified Milt Minter's life: "Donkey Bop."