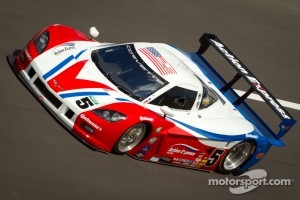 DAYTONA BEACH, FLA. (Jan. 30, 2012) – The No. 5 Action Express Racing Corvette Daytona Prototype overcame a number of difficulties – including not being able to make a qualifying run and having to pit after just one lap of the race – to turn in the top performance for Chevrolet in the 50th Rolex 24 Hours at Daytona.

“That was probably one of the toughest 24 Hours I have done,” Darren Law said following a fifth-place finish in the famed endurance race at Daytona International Speedway. “We had a lot of adversity. We had some engine issues prior to the race, (and) we had to miss qualifying. The first, probably, eight hours of the race, we had an electrical misfire, which really cut the motor back, and we struggled.

“But the guys worked really hard – Action Express, Chevrolet, Corvette – they all did a great job. I’m proud of the car. I’m proud of the team. … A top-five is a good start to the season, and we are happy to finish it.”

The Corvette Daytona Prototype was unveiled in November.

“There is so much potential in this car,” said Law, who shared driving duties with David Donohue and Christian Fittipaldi. “We literally got this car delivered to us the first of December, so we barely had any time on it. For us to be in the top five and run as well as we did, we see a lot of potential.”

The No. 99 GAINSCO/Bob Stallings Racing entry had the distinction of being the first Corvette Daytona Prototype to lead a lap when Alex Gurney drove to the front late in the first hour.

“We’re pretty happy,” Gurney said following his first stint. “At the very beginning of the race, you’re always focused on not hitting anything and making sure no one does anything crazy on the start, and (I) was happy about that. … I didn’t have any close calls. A good start for the new Corvette.”

The GAINSCO/Bob Stallings Racing Corvette DP, also driven by Jon Fogarty and Memo Gidley, did lead 19 laps but experienced a number of issues and finished 13th in the Daytona Prototype (DP) class.

The No. 90 Spirit of Daytona Corvette DP – driven by Antonio Garcia, Richard Westbrook, Oliver Gavin and Jan Magnussen – ended up in eighth place.

The No. 9 Action Express Racing Corvette DP – driven by Terry Borcheller, JC France, Joao Barbosa and Max Papis – went to the garage at about the 14-hour mark to address a number of issues, and finished ninth.

The No. 10 SunTrust Corvette DP started on the outside of the front row, courtesy of Max Angelelli’s qualifying effort, but experienced suspected valve train failure after just 14 laps.

“It’s really disappointing, but at the same time this is what happens in this game,” owner Wayne Taylor said. “We’ve never had an engine problem in all the time we’ve run the Chevrolet engine program, so this is the first time. There was truly nothing we were worried about.”

Ricky Taylor, one of the team’s four drivers and Wayne Taylor’s son, never even got the opportunity to get in the car, which was pulled after 14 laps.

“It’s such a big build up for [the Rolex 24] and it is the 50th anniversary,” Ricky Taylor said. “With our new car, there is a lot of excitement. The guys gave done so much work at the shop, (they) put in numerous 12- to-18-hour days. It is really tough. Now we have over a month until our next race. I know we’ll come back at Barber (Motorsports Park) and redeem ourselves.”

Ryan Briscoe also was scheduled to drive the No. 10.

The No. 57 Stevenson Motorsports Camaro GT.R paced Chevrolet with a fourth-place-in-class finish in the Grand Touring (GT) class. John Edwards, who was in the car at the end, said it was a very good way to start the season.

“Absolutely, especially with the endurance championship that’s going on later in the year,” Edwards said. “We got some good points, but it’s always hard to go through a 24-hour race, be chasing down a podium (finish), but not quite get it.”

Robin Liddell and Robbie Bremer also drove the No. 57.

Jordan Taylor picked up two spots in the closing laps to secure a ninth-in-class finish for the No. 88 Autohaus Motorsports Camaro GT.R, which was also driven by Paul Edwards, Matthew Marsh and Tom Milner.

Chevrolet will next compete in Grand-Am Road Racing when the season kicks into full-swing with the second event set for March 30-31, 2012 at Barber Motorsports Park, Birmingham, Ala.