TRG-AMR has two concepts approved but is looking for fans to submit ideas for a third livery design through their Facebook page.

PETALUMA, CA - Ever wanted to have your very own personalized race car? This is the next best thing. TRG-Aston Martin Racing North America is asking fans to submit their creations for a paint scheme on its Aston Martin Vantage GT3 in the Rolex Grand-Am Series. TRG-AMR has two concepts approved but is looking for fans to submit ideas for a third livery design through their Facebook page. 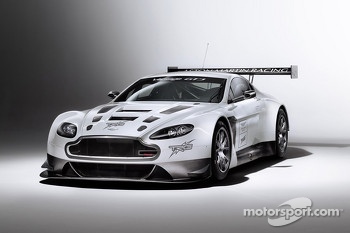 TRG-AMR will select a winner from those submitted on its Facebook page, presenting the three designs to a panel of judges that include Kevin Buckler, CEO of TRG-AMR North America; John Gaw, Managing Director of Aston Martin Racing; and Aston Martin Factory Driver Darren Turner. The winning livery will be used and raced in a 2013 Grand-Am event in North America, garnering worldwide exposure and giving the winning fan ultimate bragging rights.

Want to enter? Use the image at the top or linked below, and a photo editing program of your choosing, then post your creation to our Facebook page. Utilizing the TRG-AMR logo in a creative way will also garner bonus attention.

All entries can be submitted on the wall of the TRG Facebook page at www.facebook.com/theracersgroup. On February 20th, the judges will take all entries into consideration, with the winner being announced on February 28th.

"This contest is going to be a once in a lifetime chance for fans, artists, and car lovers," said Buckler. "We look forward to seeing the creative side of our fans and really kicking this TRG-AMR North America partnership off in a big way. People have been designing and customizing their own cars for years, and we want to give them a chance to take one of the most iconic brands, with one of the most successful sports car race teams, and give it a personalized touch."

With more than 20 years of racing experience, this is the first time The Racer's Group has invited fans to assist in the livery design of their car.

"The new partnership with Aston Martin Racing has massive potential, and one of the areas we really want to grow is the fan experience," claims Coulter Mulligan, Director of Social Media and Marketing. "From giving fans a first-class treatment at the track, to having compelling content for those at home, we want to create a constant channel for our fans to engage with our content. This is only the beginning of a long list of activations we want to create for TRG-AMR fans to interact with us."

TRG has a legacy of motorsport success that dates back to the 1990s with extraordinary wins and championships that include the Rolex 24 At Daytona (four times, once overall), the 24 Hours of Le Mans, Petit Le Mans, four championships and more than 50 major racing victories. This will be their first year competing with the Aston Martin marque and Aston Martin Racing as an official partner.