LAKEVILLE, Connecticut (Sept. 28, 2013) – Alessandro Balzan and Scuderia Corsa did exactly what they needed to do to win the GRAND-AM Rolex Sports Car Series Grand Touring (GT) championship, taking advantage of a second-lap crash by Magnus Racing’s John Potter and Andy Lally to clinch their first, and only, Rolex Series championship Saturday at Lime Rock Park as part of GRAND-AM Championship Weekend Presented by BMW. 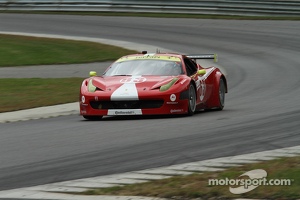 “This is crazy for me, to get the championship in the first year for Scuderia Corsa, and in the last year of the Rolex Series, is really magical,” said Balzan, who won his first North American championship. “It was a wild race, but the car was so good and our strategy was good. But believe me, I never relaxed out there today. It was so hot, and so hard.”

Aschenbach took over for usual co-driver Boris Said, who missed the race due to travel difficulties. It was the second victory for Marsh Racing of Old Lyme, Conn., which will move to the Prototype ranks in 2014 in a Corvette DP.

“Lawson and I are teammates on a regular basis in a Camaro in the Continental Tire Sports Car Challenge,” Curran said. “It was good to be driving with him here in the Corvette. To finish the season here at our home track, and then win in front of all our friends and family couldn’t be sweeter.” 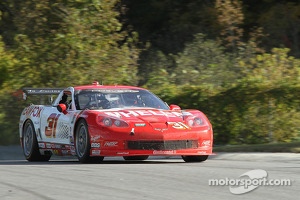 The race started with a dramatic turn of events in the GT championship, when points leader Potter was taken out on the second lap – sidelining the No. 44 Magnus Racing Porsche GT3 co-driven by Lally. The team worked feverishly to repair the car and returned to the track multiple laps down. By coming back out and finishing 13th in class (106 laps down), Magnus Racing and Lally and Potter finished second in the team and driver points, respectively.

John Edwards and co-driver Robin Liddell entered the event third in points in the No. 57 Stevenson Auto Group Camaro GT.R and had a fourth-place run to finish third in both the Rolex Series GT team and driver standings. 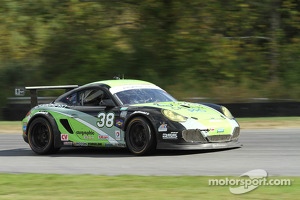 Tom Long and Sylvain Tremblay took their fourth GX victory in the No. 70 Mazdaspeed/ SpeedSource Mazda 6. SpeedSource and Mazda combined to win the final nine races of the season, but a hiccup in the season-opening Rolex 24 At Daytona put the team in too deep of a hole.

“We ran hard in every single race,” Norman said. “BGB Motorsports is a small team, and we went out and beat the factory team. It was really an honor to race against Mazda – they’re a class act.”