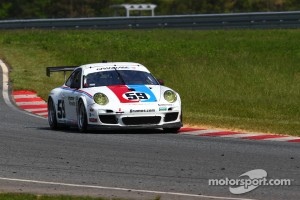 Lexington, Ohio – June 8 – Andrew Davis continued to set the qualifying pace for Porsches in the GRAND-AM Rolex Sports Car Series today at the Mid-Ohio Sports Car Course. The Bogart, Ga.-resident lapped the 2.258-mile, 13-turn Lexington, Ohio road course in one-minute, 25.429 seconds to set the second-quickest time of the GT class qualifiers for tomorrow’s EMCO Gears Classic. The lap, Davis’ seventh in the 15-minute session, was only 0.346-seconds behind the pole position-winning No. 57 Camaro of John Edwards. The outside-front row starting position is the fifth top-three qualifying effort in six attempts this season for the No. 59 Brumos Racing Porsche 911 GT3 Cup Davis races with Charleston, S.C.-resident Leh Keen.

Obviously, from last year and not being able to qualify at all, we felt like this qualifying session owed us a little bit,” said Davis after his run. “We worked really hard this morning. I was really excited about qualifying because I think our car was set for not only a fast lap but we have a good race car too. Unfortunately, our driver ID plug was not working when the tires were at their best and that took the first two laps to get fixed. We were able to recover and get a good lap in. I’m really proud of all the guys. The Brumos Racing crew did a great job and it is always a pleasure to run a Porsche 911 around Mid-Ohio.”

In total, five GRAND-AM-variants of Porsche’s venerable Porsche 911 GT3 Cup racecar will start the sixth race of the Rolex Series season. Four cars made qualifying efforts while the fifth did not set a qualifying time and will start from the back of the 26-car field. Starting ninth is the No. 44 Magnus Racing Porsche 911 GT3 Cup of John Potter. The Salt Lake City-resident turned a lap of 1:26.595 in the grey and white machine he shares with Andy Lally (Dacula, Ga.). Steven Bertheau of Aurora, Ill. lapped the No. 67 Sargent & Lundy TRG Porsche 911 GT3 Cup in 1:29.323 to qualify 15th in class. Veteran Spencer Pumpelly (Suwannee, Ga.) will co-drive with Bertheau. The final Porsche attempting a qualifying lap today was the new No. 72 Grant Racing/901 Shop effort driven by Carey Grant (Cordova, Tenn.), Kevin Grant (Eads, Tenn.) and Milton Grant (Germantown, Tenn.). Milton turned the 16th-fastest time (1:30.756) to make the team’s GRAND-AM debut.

The No. 73 Horton Autosport Porsche 911 GT3 Cup shared by Eric Foss (Dallas) and Patrick Lindsey (Santa Barbara, Calif.) did not make a qualifying attempt after an off-course excursion in the one-hour, 30-minute first practice of the day. The red and white machine was unharmed as a result of the “off” but sustained substantial damage as a result of the extrication from the gravel and subsequent tow-truck ride back to the paddock. The parts required to make repairs were not available to the team on-site in time for qualifying. Porsche Motorsports North America (PMNA) is shipping the needed oil cooler and exhaust components to Ohio overnight. Team Owner John Horton anticipates one hour for the repairs to be made allowing the car to make the green flag at 4:30 p.m. (ET).