The team had been hoping for a repeat result from last year in the same track.i

Lakeville, Conn. – When Spirit of Daytona entered the Championship Weekend event at Lime Rock Park having claimed the pole and finished second at the track last year, the team had been hoping for a repeat result in the No. 90 VISITFLORIDA.com Corvette DP driven by Ricky Taylor and Richard Westbrook. 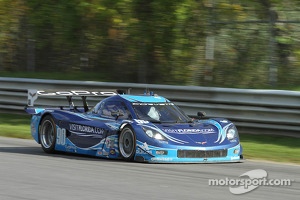 Unfortunately, the team did not have the day it had anticipated when various setbacks saw the team face frustration nearly from start to finish on race day. An intense race day schedule saw qualifying held just hours ahead of the 2.75-hour race around Lime Rock’s bullring circuit.

The 15-minute qualifying session took place first thing Saturday morning under very cool weather conditions. It was the coldest track that the team had run on throughout the two-day event and the cooler temperatures caught the No. 90 machine out during the qualifying run.

“I made a mistake in qualifying and I spun - I feel really bad about that,” said Taylor, who was tabbed to qualify the VISITFLORIDA.com machine. “We tried to make it up in the race, but the car was just sort of a handful the entire race.”

The spin in qualifying brought out a black flag for the qualifying session and per GRAND-AM rules, the No. 90 VISITFLORIDA.com machine was not allowed to return to the track to set a qualifying time. Taylor was forced to start the race from the rear of the field.

Facing an uphill battle, Taylor made quick work of moving forward as he maneuvered his way into the top-five throughout his hour-long stint.

The Spirit of Daytona Racing squad called Taylor to pit lane for the team’s first pit stop and Taylor handed the car over to Westbrook who returned to the order ninth in line. Despite not having the strongest car underneath him, Westbrook delivered a string of solid laps to move back up into the top-five with an hour remaining in the race. He made the team’s second pit stop of the event during a full course yellow with about an hour to go in the race.

He restarted from the sixth position but any forward movement was thwarted when the tight confines of the short 1.5-mile Lime Rock track saw the No. 90 VISITFLORIDA.com machine get caught up in the slower GT traffic which resulted in contact with the No. 90 spinning off track. Westbrook was forced to bring the car back to pit lane to clean out the grill and went on to finish a disappointing ninth in the final GRAND-AM event.

“All I can say is that I look forward to next year,” said Westbrook. “We kind of had a year to forget—and those happen in motorsport. Everyone can’t have good years every year. I’ve had a great several years in motorsport and I guess I was due a bad one. We’ve got a good team here. I think that everyone here is going to work hard to get everything right during the winter. We’ve got plenty of time and we’ll see how we end up for next year.”

“I love racing, and I guess it makes you stronger,” offered team owner Troy Flis. “It’s been a tough year for us, but I’ve got to say it’s been a great year for VISIT FLORIDA to be partners with us, and Chevrolet and Adidas and GoPro, without their help, we couldn’t have done what we did this year. My biggest disappointment was that we couldn’t get them a win. They got on board with us because they knew we could win, and not winning has been really tough. My brother (Todd Flis) said it best: ‘we’re a lot closer to success than failure’ so we’ve got to pick our heads up and get back after it.”

Spirit of Daytona Racing plans to announce the team’s future endeavors within the coming months.