Brix's Story Goes from Joy Sticks to Gear Shifts; The Pursuit of a Lost Love to The Pursuit of His Love of Racing LEBANON, Ohio, Jan. 16 - Harrison Brix is a race car driver, not an actor, but the story of how the young man from San Jose, Calif.

LEBANON, Ohio, Jan. 16 - Harrison Brix is a race car driver, not an actor, but the story of how the young man from San Jose, Calif. came to be racing in this year's Rolex 24 at Daytona International Speedway smacks of a movie script. 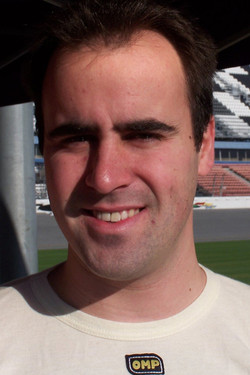 "I think I have one of the strangest starts of almost anyone, but if it works, it works," said Brix, 25, who carries the colors of SIRIUS Satellite Radio in addition to Kodak.

Like all good movie scripts, there's a girl involved. In Brix's case, this time it was one that got away.

"I chased an ex-girlfriend to Europe, but it didn't work out," he related. "While I was killing some time at Heathrow Airport in London, waiting for my flight home, I saw a video contest.

"There were 1,850 tickets being sold, and each ticket cost 75 British pounds," he explained. "There was a soccer player on the screen heading balls, and you had to predict where the center of the ball was going to end up based on the player's eyes."

The prize was a CL500 Mercedes.

Brix took a shot at it, and several weeks later he learned he'd won.

Not wanting to pay to import the car to California, he arranged to have it sold in Europe, and he used the proceeds to pursue his dream of racing cars, not just go-karts. He is a graduate (with honors) in economics from Loyola Marymount University and he had a job working for his father's company, The Brix Group, in the information technology department, but he still wanted to try to race full-time. The trip to Europe to pursue the girl, coupled with his talents playing video games and some old-fashioned good luck, provided that opportunity.

"After flaming out with my ex and then winning the contest, it seemed like something was driving me back to racing," he said. "Even though everyone around me told me to abandon my dream, fate has something else in store. I think I'm just meant to be here."

Brix was the Skip Barber Western Series champion and Rookie of the Year for 2003-2004. He ran a few Skip Barber national championship races early in 2004 before dropping that series to run five Rolex Series races in the SGS class with Sigal Sport that year. He was in the top five each time, with one victory.

Brix also ran a limited Rolex series schedule in 2005, competing in the Essex Racing Crawford Ford No. 5 Daytona Prototype in last year's Rolex 24 and then doing five more races for Howard Boss/Dyson Racing in the Crawford Pontiac No. 06.

With help from SIRIUS, he'll now drive the Kodak EasyShare car in all 14 races on the 2006 schedule. 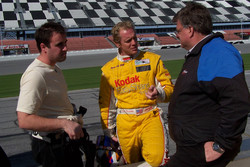 Harrison Brix, Terry Borcheller and team owner Kevin Doran discuss the set-up on the Kodak EasyShare DORAN JE4 Ford.
Photo by Linda Mansfield.
"It's been a wild ride so far, but I'm really happy to be part of the Doran Racing team for the 2006 Rolex Series and the Rolex 24," he said.

"Now I'll just have to wait and see where fate takes me this year."

He hopes for a true Hollywood ending and victory lane.

"I don't want to jinx us, but it could happen and if it did it would be great," he said. "I know everyone on our team will be trying their best. The Doran JE4 won the Rolex 24 two years ago, and Kevin Doran's team is always one to be reckoned with at the Rolex 24. They always run up front.

"I'm really looking forward to having Terry [Borcheller] as my mentor in my first full season of the Rolex Series too," he added.

Practice starts at 10 a.m. on Thursday, Jan. 26, with qualifying for the Daytona Prototypes at 3:45 p.m. that afternoon. More practice and qualifying will be held on Friday, Jan. 27 prior to the race starting at noon on Saturday, Jan. 28 and concluding 24 hours later.

Further "acts" in Brix's story will be posted on the team's Web site at doranracing.com; the series' Web site at grandamerican.com; and at Kodak.com/US/en/consumer/garr/ and restartcommunications.com.

A runaway and a steal in Toyota Pro/Celebrity race